Thousands march in Philippines against Duterte's 'misogyny' on Women's Day 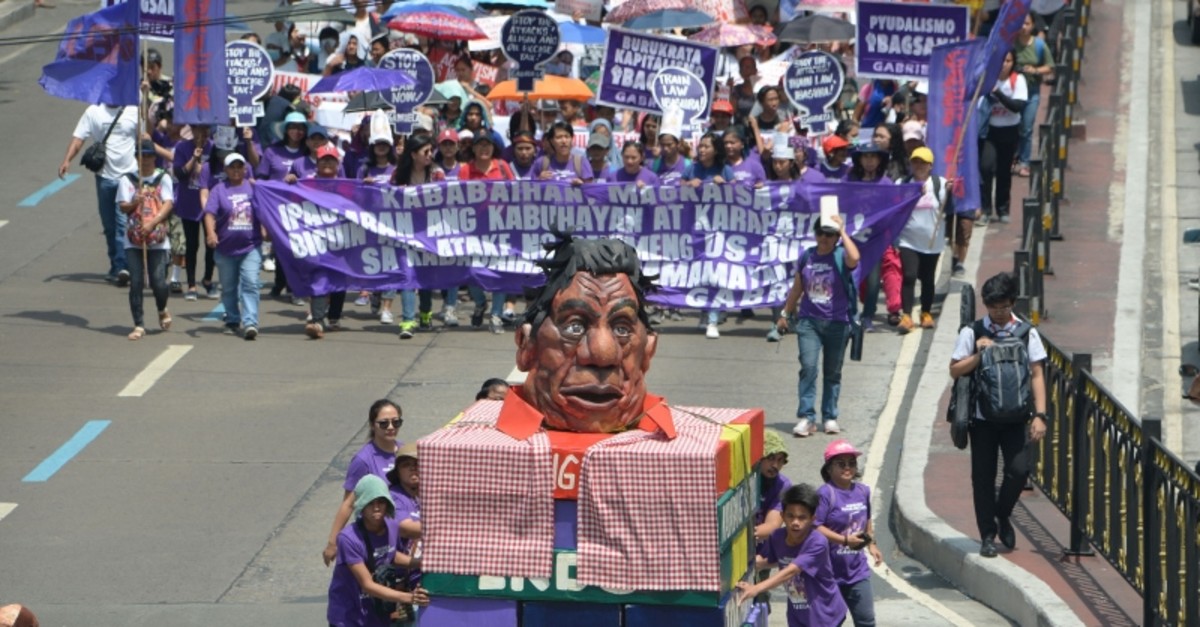 Activists from Gabriela push a carriage with an effigy of Philippines' President Rodrigo Duterte as they march toward Malacanang palace to commemorate International Women's Day in Manila on March 8, 2019. (AFP Photo)
by Mar 08, 2019 1:44 pm

Thousands of women took to the streets of Manila Friday in protest against President Rodrigo Duterte's alleged misogyny as an exhibition marking International Women's Day displayed the clothes of Philippine rape victims.

Protesters marched on Malacanang presidential palace chanting against Duterte, who has repeatedly made jokes about rape and said last year that when he was a teenager he indecently "touched" the family maid.

Presidential aides have stressed that the comments were mere jokes, not policies, and should not be taken seriously.

But protest leader Joms Salvador of women's group Gabriela told AFP that Duterte's "misogynistic" statements were "unacceptable, be they jokes or not."

"Law enforcers construe them as policy pronouncements and they embolden criminals," she added.

One woman or child is now raped in the Philippines per hour, a 153 percent increase from the decade before Duterte was elected president, according to Salvador.

A small group of policemen monitored the protesters at the palace, numbering around 4,000 according to journalists on the scene, before the group marched to a public square in another section of Manila in the afternoon.

Elsewhere in the city a shopping mall exhibition displayed clothes worn by women and girls when they suffered "gender-based violence" including rape at home, in school, at work or elsewhere.

The sponsors said the show, backed by the United Nations Population Fund local office and which has run since last month, challenges "the idea that women's appearance and behavior are to blame when they are assaulted".

"Terrible, I cried while reading all their stories," @anabemish tweeted with a picture of herself at the exhibit.

"It's a good exhibit. It raises awareness about rape. Women of all ages and backgrounds can become victims and it is infuriating that some people trivialize it," said Salvador, the protest leader.