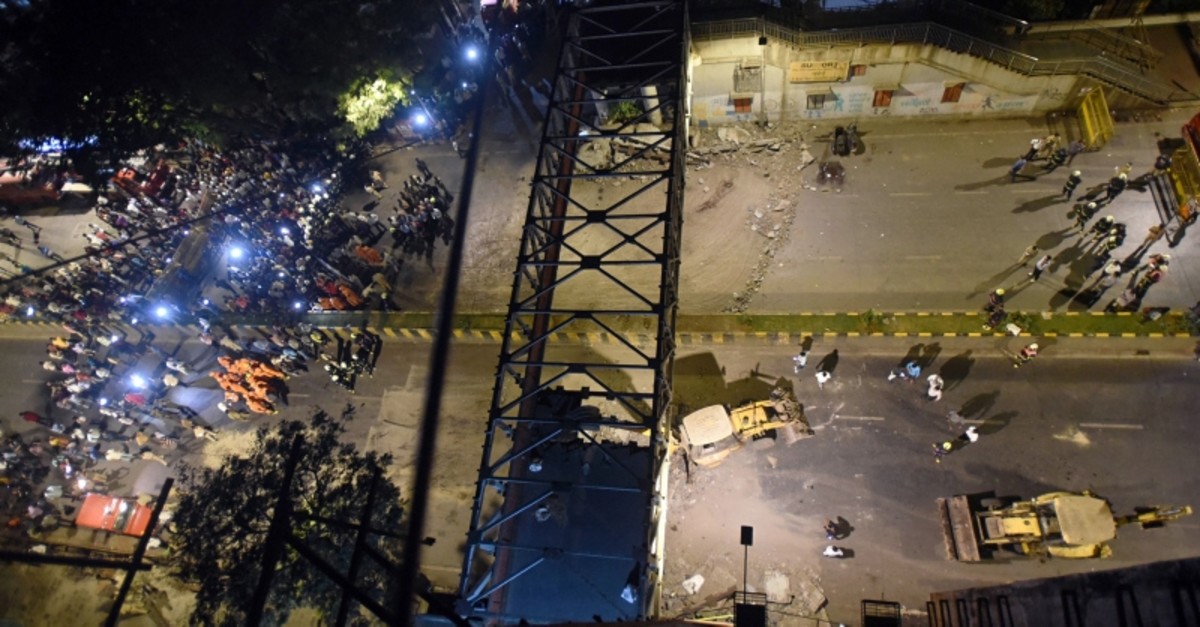 A picture taken on March 14, 2019 shows onlookers, office-goers gathering around injured people after a footbridge collapsed outside the Chhatrapati Shivaji Maharaj Terminus railway complex in Mumbai. (AFP Photo)
by Mar 15, 2019 12:00 am

Six people were killed and dozens injured when a footbridge collapsed near Mumbai's main train station on Thursday, the latest accident to highlight creaking infrastructure in India's financial capital.

The bridge, which was under repair according to multiple Indian media reports, gave way around 7:30 p.m. (1400 GMT) as rush hour commuters made their way into Chhatrapati Shivaji terminus.

Officials from the local disaster management office said six people had died while a further 31 were being treated in hospital for injuries, according to the Press Trust of India (PTI) news agency.

India's National Disaster Response Force said it had sent a team to the site over fears that people may be trapped under rubble.

The accident comes almost two years after 23 people died in a crush on a narrow overcrowded footbridge at Prabhadevi station in the center of the city in September 2017. Indian railway officials blamed bad weather for causing the deadly stampede despite commuter warnings before the tragedy of a disaster waiting to happen.

Experts pointed the finger of blame at the railway network's creaking infrastructure, which has long struggled to cope with several million daily passengers.

About 7.5 million passengers commute in nearly 2,500 trains daily on Mumbai's colonial-era rail network, a lifeline for the city's 20 million residents.

Traveling on it is not without its dangers, however.

An average of almost 10 people die on the suburban railway every day, either from falling off crowded trains or while crossing the tracks.

Commuters say investment in the railway's crumbling infrastructure has not kept up with the city's burgeoning population.