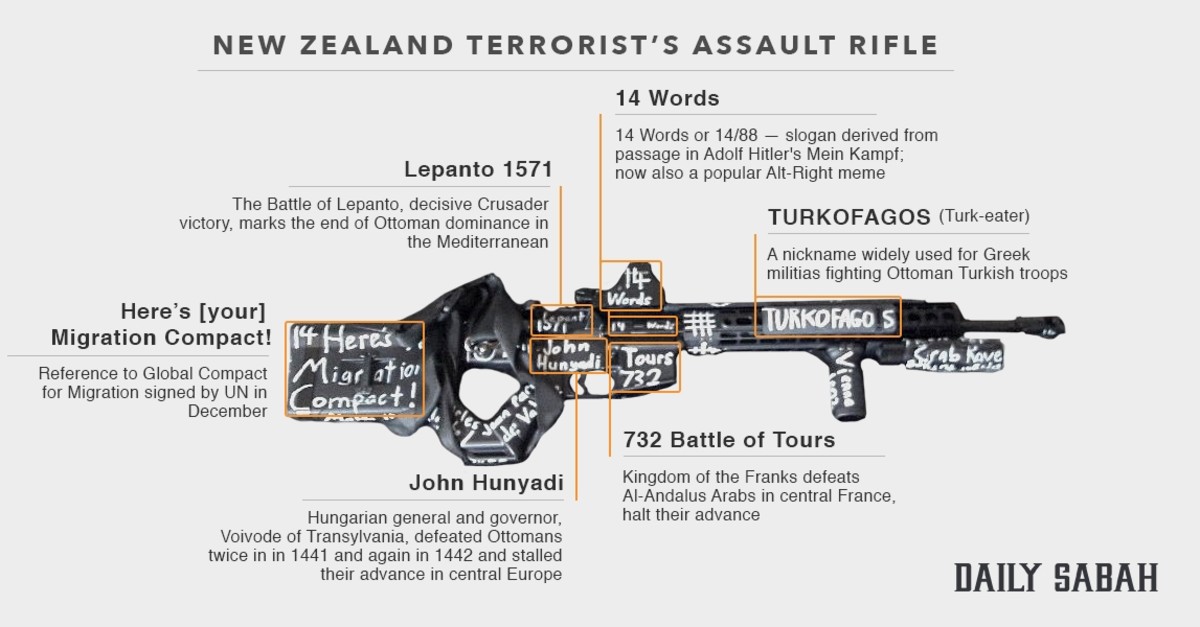 As if the twin terror attacks in New Zealand's Christchuch weren't disturbing enough, newly-surfaced photos of one of the shooters' guns has revealed an even darker picture: the gunman painted his weapon of mass murder with names of his "idols" and references to EuroChristianity's victories against Muslims, Turks and Ottomans. 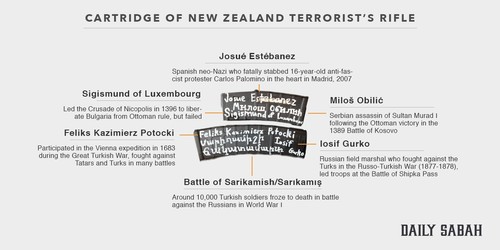 A Twitter account with the handle @brentontarrant had posted on Wednesday images of a rifle and other military gear decorated with these names and messages connected to white nationalism. What looked like the same weapons appeared in the Facebook livestream of the mosque attack on Friday. 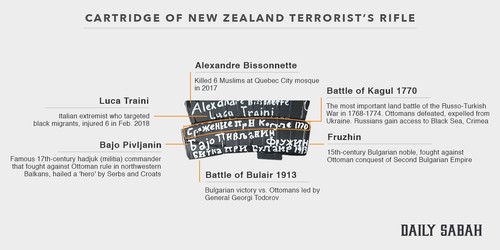 Letters and numbers from the Latin, Cyrillic and Georgian (Mkhedruli) alphabets, words and dates related to places, people and battles associated with violent conflict throughout history between Christians and Muslims could be seen on the weapons. 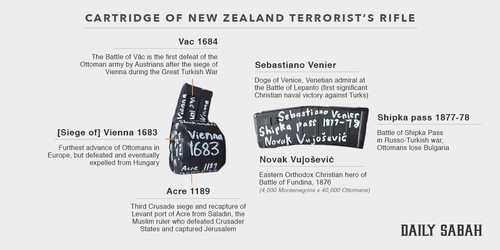 Here are some of the historical figures the attacker chose to display on his assault rifle and his rifle's magazines:

Alexandre Bissonnette — the university student who burst into the Quebec City mosque on Jan. 29, 2017, and opened fire on the 40 men and four children who were chatting among themselves after evening prayers.

Bajo Pivljanin — a famous 17th-century hadjuk (militia) commander who fought against Ottoman rule in the northwestern Balkans and was hailed a "hero" by Serbs and Croats.

Charles Mantel — the defacto King of the Franks, nicknamed "The Hammer," who won the Battle of Tours.

John Hunyadi — a Hungarian general and governor and the Voivode of Transylvania. He defeated Ottoman forces both in 1441 and again in 1442.

Konstantin II Asen — Constantine II of Bulgaria, who led a rebellion against the Ottomans that lasted for half a decade, but ended in defeat

Milos Obilis — a Serbian knight in the service of Prince Lazar, the assassin of Ottoman Sultan Murad I.

Pelayu — a Visigothic nobleman instrumental in the victory at the Battle of Covadonga. He is credited with starting the Reconquista (the Christian reconquest of the Iberian peninsula from the Moors).

Prince Fruzhin — a Bulgarian noble who fought against Ottomans in the conquest of the Second Bulgarian Empire.

Sebastiano Venier — doge of Venice who fought against the Turks during the Fourth Ottoman-Venetian War.

Sigismund of Luxembourg — led the Crusade of Nicopolis in 1396 to liberate Bulgaria from Ottoman rule, but failed.

Feliks Kazimierz Potocki — participated in the Vienna expedition in 1683 during the Great Turkish War and fought against Tatars and Turks in many battles.

Iosif Gurko — Russian field marshal who fought against the Turks in the Russo-Turkish War (1877-1878). He led troops at the Battle of Shipka Pass. 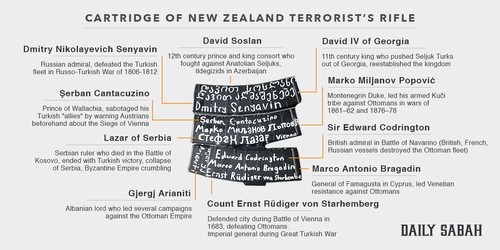 Other important dates, events and numbers painted on the rifle:

14 Words (or 14) — a slogan derived from a passage in Adolf Hitler's autobiography Mein Kampf. It is now also a popular meme used by the alt-right. Most commonly known as: "We must secure the existence of our people and a future for white children."

Here's your migration compact! — reference to the Global Compact for Migration signed by the U.N. in December.

Siege and Battle of Vienna, 1683 — the farthest advance of Ottomans into Europe, but the empire was defeated there and expelled from Hungary.

(Siege of) Acre (1189 -1191) — The Third Crusade besieged the walled Muslim city of Acre and recaptured the port in Levant from Saladin, who was the Muslim ruler of Egypt and Syria who defeated Crusader States and captured Jerusalem.