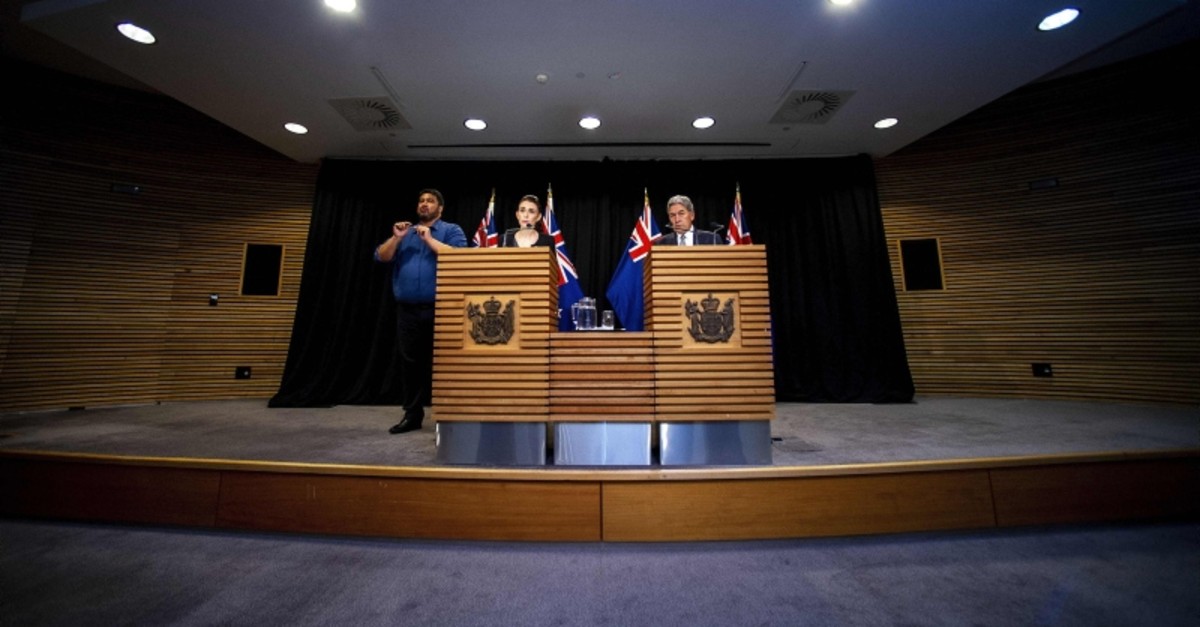 New Zealand Prime Minister Jacinda Ardern (L) and Deputy Prime Minister Winston Peters speak to the media with an interpreter during a Post Cabinet media press conference at Parliament in Wellington on March 18, 2019 (AFP Photo)
by Mar 18, 2019 12:00 am

New Zealand will tighten gun laws in the wake of its worst modern-day massacre, the government said Monday, as it emerged the white supremacist accused of carrying out the killings at two mosques will represent himself in court.

Prime Minister Jacinda Ardern said her coalition was unified on the need to reduce the availability of the kind of weapons used by Brenton Tarrant as he went room to room shooting Muslims gathered for Friday prayers.

"We have made a decision as a cabinet, we are unified," she said, flanked by her coalition partner and deputy prime minister, Winston Peters.

"The reality is that after one pm on Friday our world changed forever, and so will our laws," he said.

Although details have yet to be hashed out, the speed of New Zealand's move has resonated around the world -- particularly in the United States, where reforms have spluttered for decades, and similar debates are re-run after each new mass shooting.

Ardern, the youthful premier who has become the face of the nation's tragedy, said there would be an inquiry into the horrifying attack, as questions swirl over whether intelligence agencies should have spotted warning signs.

The role of social media has also come under the spotlight, after the gunman livestreamed his rampage on Facebook.

A teenager, whose name cannot be published, appeared in court Monday charged with distributing that footage.

Grief continued to wash across the nation Monday, with New Zealanders of all stripes gathering to express revulsion over the killings -- and unity in the face of racial hatred.

A Maori cleansing ceremony was performed at the Al Noor mosque -- the scene of the largest massacre -- bringing together indigenous Kiwis, Muslim leaders and local officials.

Later, dozens of students gathered there to pay their respects, laying flowers and lighting candles.

Many came together for a haka -- a traditional Maori ceremonial dance that has been performed by groups across New Zealand in the wake of killings.

And in Auckland, students at Orewa College gathered to form a heart and the message "Kia Kaha" -- "stay strong" in Maori.

"It brings to mind our own values and why we find this so abhorrent. Ideas held by the perpetrator have no place in our community and school," the college said.

The organisers of New Zealand's largest gun show -- the Kumeu Militaria Show, near Auckland -- announced Monday they had canceled the event in the wake of the massacre and because of "elevated security risks"

Despite having tightened the rules in the 1990s after the last mass shooting, New Zealand has relatively permissive gun laws, with nearly all of those who apply granted gun licenses.

David Tipple, the managing director of Gun City, whose online store sold Tarrant four weapons, said he felt no responsibility for the killings.

"We detected nothing extraordinary about this license holder," he told reporters.

Tarrant, who appeared in court on Saturday charged with murder, on Monday sacked his state-appointed lawyer.

Richard Peters, who represented the alleged killer during the hearing, told AFP the 28-year-old "wants to be self-represented in this case."

"The way he presented was rational and someone who was not suffering any mental disability. He seemed to understand what was going on," Peters said.

Under New Zealand law, if Tarrant pleads not guilty his case would normally go to trial, raising the possibility that he could face survivors and victims' families in court.

Mustafa Farouk, president of the Federation of Islamic Associations of New Zealand, told reporters he had faith in the system.

"As a community, we would like that person to go through the process, the due process, and to be given all his rights," he said.

"We believe in the justice system here and we know it will do what is right."

But, he cautioned, the attitudes that gave rise to the killing -- documented in a rambling, racist screed released online minutes before the attacks began -- must be tackled.

"This rise in hatred... by people who call themselves right-wing, whether smaller groups or through reckless politicians, should not be allowed to continue.

"What happened to our community here will happen to another community," he said.

Frustrated families of the 50 victims were still waiting Monday for the release of the bodies of their loved ones, as officials worked their way through a painstaking investigation.

Dozens of graves were being dug in readiness for that release, which Police Deputy Commissioner Wally Haumaha said he hoped would happen soon.

"The process has been highly emotional and stressful for all... as in accordance with Islamic faith the families have wanted the bodies to be returned as soon as possible," he said.

"We have burial expert teams in place ready to receive the bodies at a point in time."

The dead from Friday's attack span generations, aged between three and 77, according to a list circulated among relatives.

Some victims came from the neighborhood, others from as far afield as Egypt. At least two of the dead came from the same family -- a father and son.

Delhi said Sunday that five of its nationals were killed, while Pakistan said nine of its citizens were among the dead, including one man who died trying to rush Tarrant.

The ripples from Friday's horror continued to spread across New Zealand, with the brief shuttering of an airport in Dunedin after a suspicious package sparked a security alert.

Reigning Super Rugby champions Canterbury Crusaders, who play in Christchurch, said Monday they would consider changing their name after criticism that it was historically insensitive.

Distinctive writing on the mosque attacker's weaponry included the names of figures from the Crusades, the religious wars waged by European Christians against Muslims for control of the Holy Land in the Middle Ages.