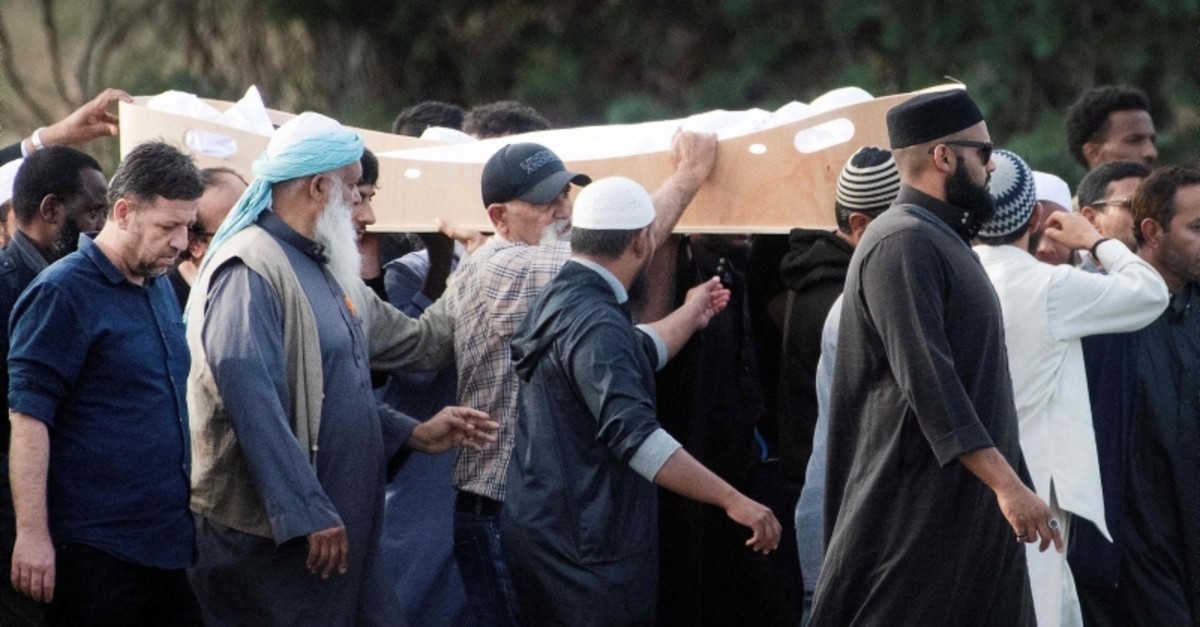 Mourners carry the body of a victim of the Friday March 15 mosque shootings for a burial at the Memorial Park Cemetery in Christchurch, New Zealand, Wednesday, March 20, 2019. (AFP Photo)
by Compiled from Wire Services Mar 20, 2019 4:53 pm

A father and son who fled the civil war in Syria for "the safest country in the world" were buried before hundreds of mourners Wednesday, the first funerals for victims of twin terror attacks at two mosques in New Zealand that horrified a nation known for being welcoming and diverse.

The funerals of Khalid Mustafa, 44, and Hamza Mustafa, 15, came five days after a white supremacist methodically gunned down 50 worshipers at two mosques in Christchurch — a massacre that he broadcast live on Facebook.

Hamza's high school principal described the student as compassionate and hardworking, and said he was an excellent horse rider who aspired to be a veterinarian.

Those present included Hamza's younger brother, 13-year-old Zaed, who was wounded in an arm and a leg during the attack. The boy tried to stand during the ceremony but had to sit back in his wheelchair, one mourner said.

"We tried to not shake his hand, and not touch his hand or his foot, but he refused, he wanted to shake everybody's hand, he wanted to show everyone that he appreciated them. And that's amazing," said Jamil El-Biza, who traveled from Australia to attend the funeral.

The Mustafas had moved to New Zealand last year, after spending six years as refugees in Jordan. Mustafa's wife, Salwa, told Radio New Zealand that when the family asked about New Zealand they were told "it's the safest country in the world, the most wonderful country you can go ... you will start a very wonderful life there."

Prime Minister Jacinda Ardern said the family should have been safe.

"I cannot tell you how gutting it is to know that a family came here for safety and for refuge," she said.

Four other burials were carried out on Wednesday evening. Those victims include Junaid Ismail, Ashraf Ali and Lilik Abdul Hamid. The fourth victim's name was suppressed by court order.

Families of those killed had been anxiously awaiting word on when they could bury their loved ones. Police Commissioner Mike Bush said police have now formally identified and released the remains of 21 of those killed. Islamic tradition calls for bodies to be cleansed and buried as soon as possible.

The bullet-ridden Al Noor mosque, where more than 40 people died, is being repaired for Friday prayers.

Near the mosque, members of rival gangs did a Maori haka, a powerful indigenous ceremonial performance and a crowd of people sung New Zealand's national anthem as the sun set.

The Australian National Imams Council has called on Imams to dedicate this Friday's Khutbah (sermon) to the Christchurch mosque mass shooting.

"The attack on any Muslim or any innocent person anywhere around the world is an attack on all Muslims and all people," the council said in a statement.

"This is a human and an international tragedy, not only a Muslim and NZ tragedy. These acts of terror are there to divide us... and we reject this in all its forms and ways, but rather we will stay united and strong," the statement added.

The burials began soon after Ardern renewed her call for people to speak of the victims rather than the man who killed them.

Also on Wednesday, a man accused of sharing video footage of Friday's massacre was jailed by a judge until his next court appearance in mid-April. And Bush said he believes police officers stopped the gunman on his way to a third attack.

Ardern's plea against giving the accused gunman notoriety followed his move to represent himself in court, raising concerns he would attempt to use the trial as a platform for airing his racist views.

During a visit Wednesday to the high school Hamza and another victim attended, Ardern revisited that thought and asked students not to say the attacker's name or dwell on him.

"Look after one another, but also let New Zealand be a place where there is no tolerance for racism," she told students at Cashmere High School. "That's something we can all do."

About 30 people wounded in the attacks remained hospitalized as of Tuesday evening. Around 10 of them were in critical condition, including a 4-year-old girl.

Brenton Harrison Tarrant, a 28-year-old Australian man, has been charged with murder and is next scheduled to appear in court on April 5. Police have said they are certain Tarrant was the only gunman but are still investigating whether he had support from others.

Ardern previously has said reforms of New Zealand's gun laws would be announced next week and she said an inquiry would be convened to look into the intelligence and security services' failures to detect the risk from the attacker or his plans.

New Zealand's international spy agency, the Government Communications Security Bureau, confirmed it had not received any relevant information or intelligence before the shootings.

Philip Arps, 44, appeared in a Christchurch court Wednesday on two charges of distributing the killer's livestream video of the attack on the Al Noor mosque, the first mosque that was attacked, a violation of the country's objectionable publications law. Each charge carries a maximum sentence of 14 years in prison.

Arps, heavily tattooed and dressed in a T-shirt and sweatpants, hasn't entered a plea. He remained expressionless during the hearing, his hands clasped behind his back.

Charging documents accuse Arps of distributing the video on Saturday, one day after the massacre.

Most details of bail hearings are suppressed under New Zealand law. The judge made an additional suppression order regarding the police summary of facts in the case, limiting reporting of the accusations to the charges themselves.

Bush, the police commissioner, said they believe they know where the gunman was going for a third attack when officers rammed his car off the road but won't say more because it's an active investigation.

In a 74-page manifesto he released before the attack, Tarrant said he was going to attack two mosques in Christchurch and then one in the town of Ashburton if he made it that far.

Bush also revised his timeline, saying officers rammed the suspect's car 21 minutes after the first emergency call, rather than 36 minutes. Bush said FBI agents have traveled to New Zealand to help with the investigation.

"It's not only for the Muslim community, but for the whole of New Zealand, and the world as well," he said. "If we don't show our support at this time, when are we going to show it?"

He said there would be many waves of emotions to come for the families of the victims.