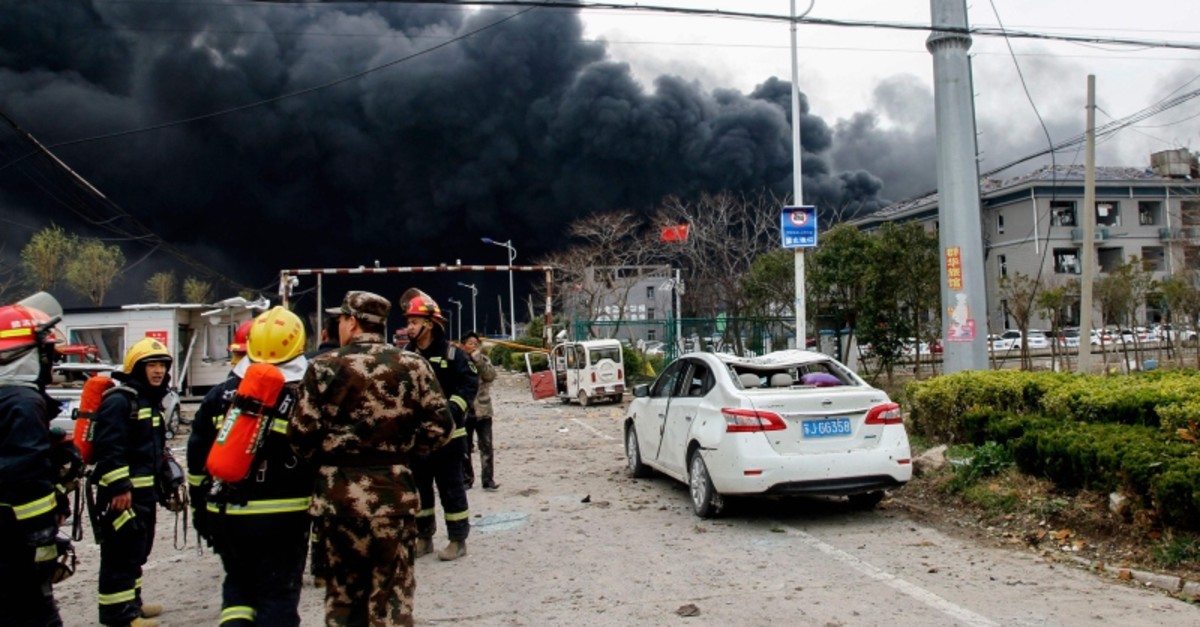 A huge explosion rocked a chemical plant in eastern China on Thursday, killing at least six people and injuring dozens as it knocked down factory buildings, damaged homes and sent a huge plume of smoke skyward.

The windows of houses and a school in the surrounding area were shattered by the force of the explosion, and residents were evacuated amid concerns about toxic fumes, according to authorities and images published by local media.

The latest industrial incident to rock China in recent years occurred at around 2:50 p.m. (0650 GMT) at a facility run by Tianjiayi Chemical in Yancheng, Jiangsu province, city officials said on Twitter-like Weibo.

Around the time of the explosion, China's earthquake administration reported a 2.2-magnitude tremor in Lianyungang, a city near the Yancheng blast.

A large blaze continued to light up the sky on Thursday night, said AFP reporters who attempted to access the industrial area.

Dozens of fire engines and ambulances -- some drafted in from other cities -- raced to and from the scene.

Police sealed off all roads and dirt tracks to the site.

An aerial view of the blast area showed a large swath of destruction in the industrial park, where multiple fires had initially raged.

At least six people were killed and 30 seriously injured, while numerous others in the vicinity were slightly injured, city officials said on Weibo.

"At present, on-site rescue is still going on... The cause of the accident is under investigation," officials said.

Rescuers interviewed by state broadcaster CCTV repeatedly described the ground situation as "complex," adding that the focus was on trying to pull people from the site.

Images broadcast by state media showed an enormous explosion, with flames engulfing the top of the chemical plant and thick grey smoke billowing into the air.

The explosion occurred following a fire in a fertiliser factory, according to official news agency Xinhua, citing local authorities.

Workers near the site of the blast were trapped after shockwaves from the explosion knocked down nearby factory buildings, the report said.

Workers covered in blood were seen running out of the factory, Xinhua added, citing witnesses.

Pictures from a local news outlet showed a classroom with blown out windows, children's backpacks scattered among broken glass and hastily abandoned schoolwork.

Footage put up late Thursday by CCTV showed firefighters carrying someone on a stretcher to an ambulance. Another clip showed rescuers walking around a darkened neighbourhood as a voice says "the team is here to look for anyone who might be trapped".

Strong winds around the site helped disperse fumes though there were concerns about their toxicity, Yancheng's environment bureau said in a later statement, adding that residents in the surrounding areas have been "basically evacuated".

While there is a small river next to the site, it is not used as a drinking source, the agency added.

Industrial accidents are common in China, where safety regulations are often poorly enforced.

In November, a gas leak caused an explosion at a PVC production plant in a northern Chinese city that will host the 2022 Winter Olympics, killing 24 people and injuring 21 others.

A report published by local authorities in February revealed that the Chinese chemical firm responsible for the accident had concealed information and misled investigators.

Last July, a blast at a chemical plant in southwest Sichuan province left 19 dead and 12 injured. The company had undertaken illegal construction that had not passed safety checks, according to local authorities.

And in 2015, giant chemical blasts in a container storage facility killed at least 165 people in the northern port city of Tianjin.

The explosions caused more than $1 billion in damage and sparked widespread anger at a perceived lack of transparency over the accident's causes and its environmental impact.