Christchurch terrorist to be charged with 50 counts of murder 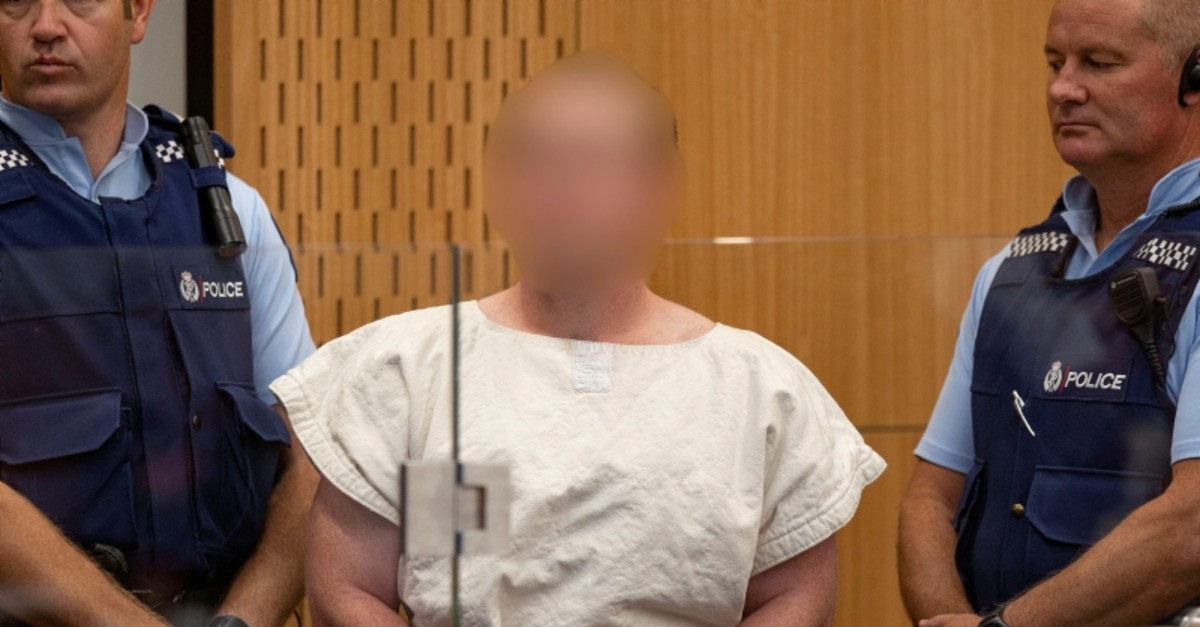 Brenton Tarrant, charged for murder in relation to the mosque attacks, is seen in the dock during his appearance in the Christchurch District Court, New Zealand March 16, 2019. (Reuters Photo)
by Daily Sabah with Wires Apr 04, 2019 4:44 pm
The man accused of carrying out the Christchurch mosque attacks will face 50 murder charges and 39 attempted murder charges when he makes his second court appearance, New Zealand police said Thursday.

Police had earlier filed a single, representative murder charge against 28-year-old Australian Brenton Harrison Tarrant. He is due to appear via video link during a brief hearing on Friday, and won't be required to enter a plea.

Fifty people died in the March 15 attacks on two mosques and another 50 were injured.

Police said in a brief statement that they were considering filing more charges against Tarrant but couldn't comment further as the case was before the court.

Tarrant's first appearance was on the day after the attacks in the Christchurch District Court. His case has now been moved to the High Court due to the seriousness of the charges. Tarrant has reportedly been moved to a high-security prison in Auckland, which is why he'll appear via video link.

During the scheduled court hearing, media photographs won't be allowed and reporting on the proceedings will be severely restricted under New Zealand law. The intent of the law is to avoid the possibility the reporting and images would taint the views of potential jurors before they hear evidence in court.

Judge Cameron Mander said in a note that the brief hearing will mainly be about the accused gunman's legal representation.

Tarrant earlier dismissed lawyer Richard Peters, who was assigned to represent him during his district court appearance. Peters said Tarrant told him that he wants to represent himself. Many worry that Tarrant will try to use his trial as a soapbox to push his white supremacist views.

The judge said he had received applications from 25 media organizations to take film, photographs or audio recordings of Friday's hearing but had denied all of them. He said reporters could remain throughout and take notes, although would be restricted in what they could report.

He said media could still use pixelated images of Tarrant which the district court judge had allowed. The pixilation obscured his face.

Retired law professor Bill Hodge said the idea behind obscuring his image was that the prosecution might need a witness to be sure he saw the gunman at the mosque rather than recognizing him from media stories.

Hodge said New Zealand and Australia were trying to preserve the ancient common-law approach to a fair trial, but that it seemed quaint in an era where people could easily find more information or images on the internet.

New Zealand's Department of Corrections said in an email they wouldn't answer questions such as where Tarrant was being held due to operational security reasons. They said that despite some restrictions, he was being managed in accordance with New Zealand and international laws regarding the treatment of prisoners.

"At this time, he has no access to television, radio or newspapers and no approved visitors," the department said.

The alleged New Zealand mosque attacker made several donations to far-right "identitarian" activists in Europe known for their anti-immigration activities, Austrian daily Der Standard reported yesterday. The terrorist made donations in 2017 and 2018, the daily said, citing security sources from Germany and Austria familiar with the investigations. In 2017, the Australian made four donations totaling 2,200 euros (approximately $2,500).

Sources quoted by the paper with knowledge of the probe in Germany said the money went to the French "Generation Identitaire" group. However, Austrian domestic intelligence was still probing whether the money all went to a group in a single country, the paper reports.

The Christchurch mosque terror attack became the latest example of growing far-right terrorism, a well-known global threat. The terrorist left a manifesto behind which showed that the attack was motivated by deep-rooted anti-Muslim and xenophobic sentiments often targeting Turks in Europe. The terrorist also visited Turkey twice in 2016 according to Turkish officials, who said they were evaluating the possibility that the terrorist would have come to the country to carry out a terror or suicide operation.

Tarrant also donated 1,500 euros to Martin Sellner, the leader of the Identitarian Movement Austria (IBOe), in 2018. Sellner, whose apartment was raided last week after authorities became aware of the link, has admitted receiving the donation but has denied having had any contact with him.

Austria, which is governed by a coalition including the far-right Freedom Party (FPOe), is now probing whether the IBOe is a terrorist organization and as such could be disbanded. FPOe politicians, including Vice-Chancellor Heinz-Christian Strache, have also moved to distance themselves from reported links between FPOe and IBOe members. France is also studying whether the Identitarian group there can be disbanded over a recent anti-immigration stunt on a roof of an administrative building in a Paris suburb.