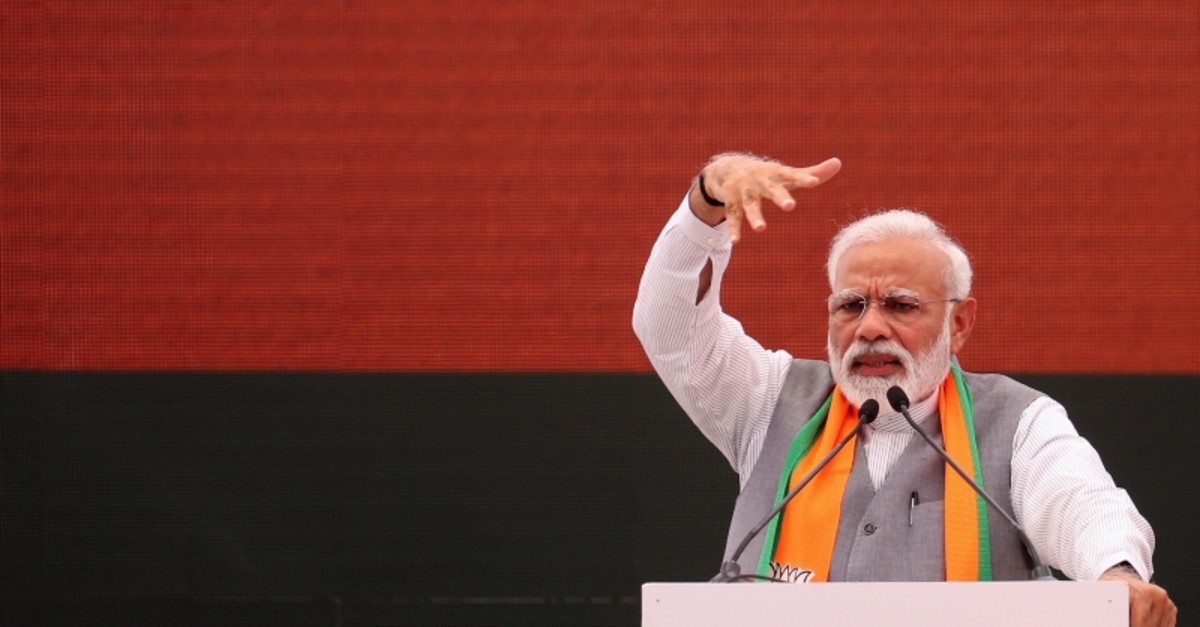 India's ruling Hindu nationalist party released its election manifesto on Monday, three days before the start of a multi-phase general election in the world's largest democracy.

Prime Minister Narendra Modi vowed to spend more than $1.4 trillion on new infrastructure over five years to create much-needed jobs and to pursue his nationalist agenda if he wins the election.

Modi's right-wing Bharatiya Janata Party (BJP) also promised $300 billion for the country's hard-pressed farmers and rural development as it went all out to stop voters being tempted by opposition parties in the world's biggest election that runs from Thursday until May 19.

The BJP's big-spending manifesto was accompanied by promises to keep its Hindu bedrock behind the party that won a landslide victory in 2014 but has lost key state elections in recent months.

The party vowed to scrap a law that gives special privileges -- such as preventing outsiders from buying property -- to residents of Jammu and Kashmir, India's only Muslim-majority state.

Modi's party also said it was committed to building a grand Hindu temple in place of a Muslim mosque demolished by Hindu mobs in the city of Ayodhya in 1992.

The rights of outsiders in Kashmir and the temple promise have become flashpoint issues between Hindus and Muslims in recent years.

Tens of thousands have died in an uprising lasting three decades against Indian rule in Kashmir, while the burning down of the five-century-old Ayodhya mosque led to riots in which more than 2,000 people, mainly Muslims, were killed.

"Nationalism is our inspiration, economic development of the poor and backward sections our philosophy, and good governance our mantra," Modi said after releasing the election manifesto at BJP headquarters in New Delhi, as supporters chanted "Modi, Modi."

Modi remains very popular in India, but his government has come under fire over its handling of the fast-growing economy, particularly the failure to create jobs for the millions of youths coming on the labour market each year and the severe debts hitting farmers.

Facing criticism from the opposition Congress party, the BJP said more than $1.4 trillion would be spent during the next five-year term if it wins. It promised metro trains for 50 cities and to double the national highway network.

On top of the rural development, each farmer would get an annual handout of 6,000 rupees ($86). Thousands of farmers have killed themselves in recent years because of crippling debts.

The party set 75 targets -- divided between the economy and its longstanding aim to transform society -- to be reached by 2022 when India marks its 75th anniversary of the end of British colonial rule.

"It (the manifesto) is multi-layered and multi-dimensional because our society is very diverse. We can't have a one-size-fits-all kind of policy," Modi said.

While the BJP promises also included lower taxes for the middle-classes and more health facilities, the prime minister has built his reputation over the past five years as being a hawk on national security.

Home Minister Rajnath Singh said Indian security forces would be given "a free hand" to rein in extremist violence.

In February, India and Pakistan staged tit-for-tat air strikes as they faced off in their worst confrontation in years over Kashmir. The action appears to have bolstered Modi's standing.

The vow to scrap a constitutional amendment providing special rights to Kashmir could also spike tension in Kashmir. The BJP has long supported ending Kashmir's special status, but its proposal is currently before the Supreme Court.

In its manifesto last week, the main opposition Congress party pledged to create more jobs, hand money to India's poorest and change a law on special powers for troops in Kashmir.

It dismissed the BJP manifesto as anti-farmer, despite its pledge of a pension scheme for small and marginal farmers who make up more than 80 percent of India's estimated 263 million farmers, with landholdings smaller than 2 hectares (5 acres).

"Remember the good old days before 2014 when Indians had jobs and a PM that didn't lie to them," Congress said on Twitter, with a hashtag calling the BJP manifesto a gimmick.