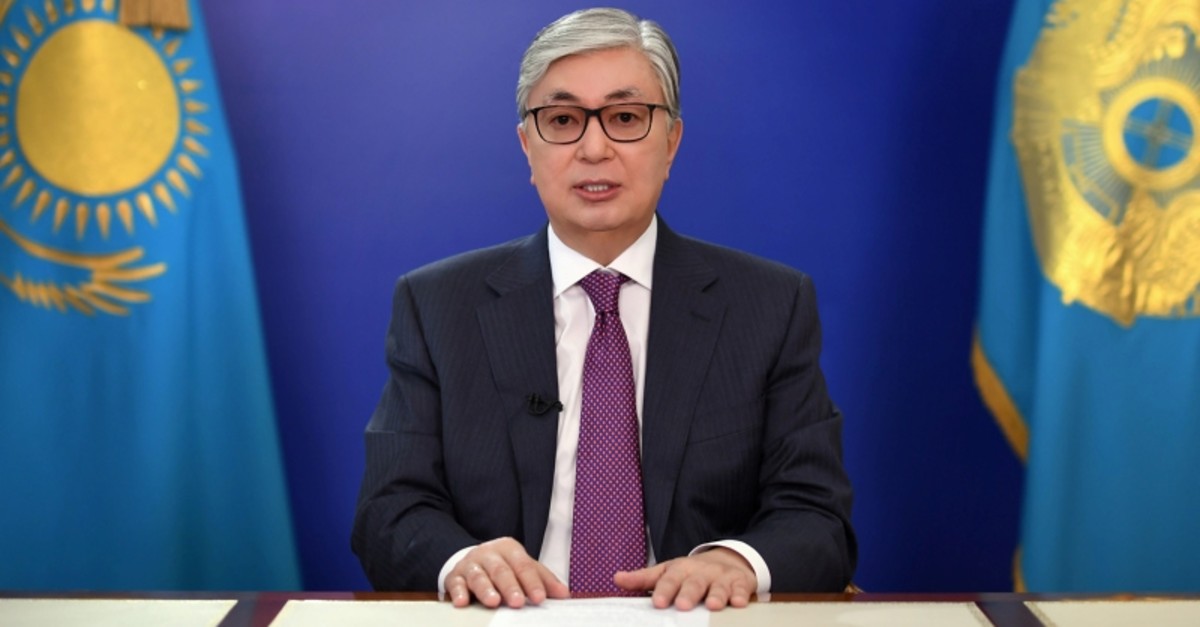 Kazakhstan's interim President Kassym-Jomart Tokayev speaks during a televised address to the nation to call a snap presidential election in Nur-Sultan, Kazakhstan in this handout photo released April 9, 2019 (Reuters Photo)
by Compiled from Wire Services Apr 09, 2019 10:26 am

Kassym-Jomart Tokayev, who became the acting head of state when Nazarbayev resigned, said in a televised address to the nation that the vote will be held on June 9.

In a televised address to the nation, Tokayev said he had consulted with 78-year-old Nazarbayev -- known as "Elbasy" or "Leader of the Nation" in Kazakh -- and other top officials before making the decision.

"We must continue to work on the implementation of the strategy of Elbasy," Tokayev said.

"This can be done only by the direct expression of the will of the people... As the acting head of state, I guarantee that the elections will be held honestly, openly and fairly."

Tokayev did not immediately say whether he would run though most analysts have tipped him to succeed Nazarbayev, at least in the short-term.

"I don't think there is much doubt it will be him," independent political analyst Aidos Sarym told AFP.

Sarym described Tokayev's decision to call the election as a move to ensure calm and stability in the country of 18 million people following Nazarbayev's surprise resignation.

"This was important for investors, both foreign and local. Business has been bothered by all the uncertainty," Sarym said.

Other reasons are to reassure neighbouring countries and stabilise the state apparatus, he said.

With all this taken into account, the leadership had "little choice" but to move towards a snap election, Sarym said.

Tokayev, formerly the speaker of the upper house of parliament, hasn't yet announced his intention to seek the presidency. Pundits saw him and Nazarbayev's eldest daughter as the two most likely candidates to succeed Nazarbayev, who retained significant powers following his resignation as lifetime chairman of the nation's Security Council and the head of the ruling Nur Otan party.

Dariga Nazarbayeva, 55, who has been named parliament speaker after Tokayev became acting president, has remained coy about her plans.

Her aide said Tuesday in remarks carried by the Tengrinews agency that she has no intention to run,

When contacted directly by another news website however, Nazarbayeva did not confirm or deny a potential run.

"Any citizen of the country may run for (the presidency) in accordance with the Constitution and the laws. Political parties determine nominations," she was quoted as saying by Zakon.kz.

Her father took the helm in Kazakhstan when it was still part of the Soviet Union and led it for three decades.

Nazarbayev was credited with transforming the country into an energy powerhouse with growing diplomatic clout, but also accused of clamping down on the opposition and tolerating little dissent.

The capital was quickly renamed from Astana to Nur-Sultan in his honor following his resignation.

During the visit, Putin raised the prospect of Russia building a nuclear power plant in the country, a move that would bring Kazakhstan even closer into Moscow's orbit.

The government faces a challenge to tackle growing discontent over falling living standards after Kazakhstan's economy was hit by the 2014 drop in oil prices and western sanctions against Russia, a key trading partner.

Dozens have been arrested while attempting to hold anti-government protests in the country's two largest cities, Nur-Sultan and Almaty, since Tokayev took office.