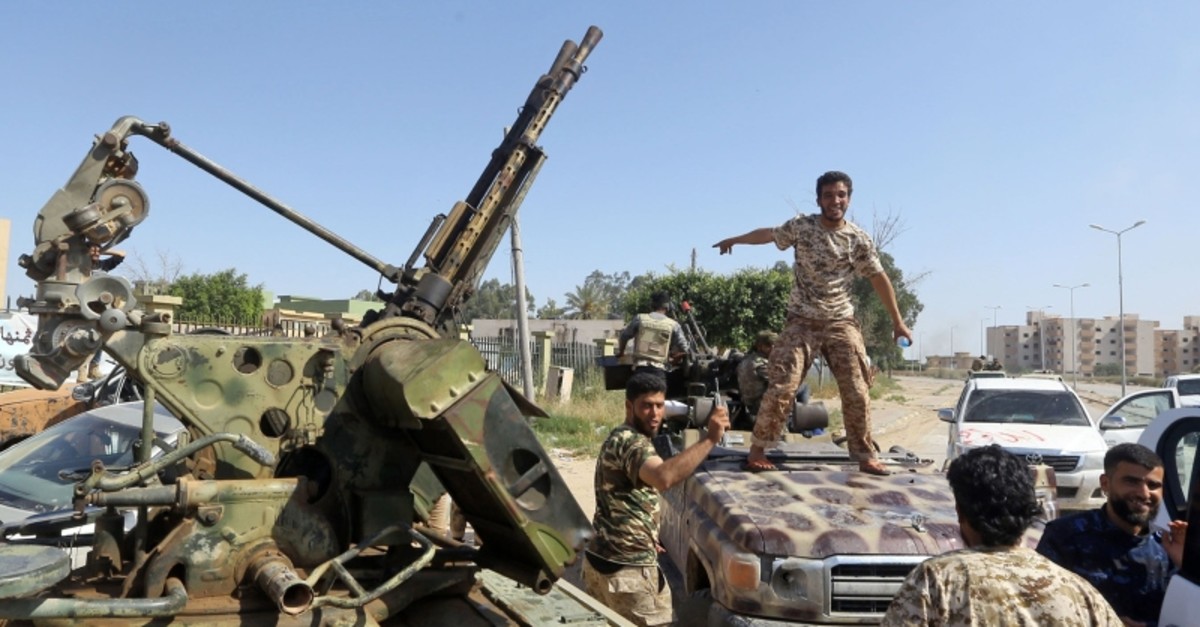 Forces loyal to Libya's Government of National Accord (GNA) gesture on April 18, 2019, after taking control of the area of al-Aziziyah, located some 40 kilometres south of the Libyan capital Tripoli. (AFP Photo)
by Apr 19, 2019 11:06 am

The U.N. said Friday it had evacuated 163 refugees from war-ravaged Libya to neighboring Niger, but more than 3,000 others were still trapped in detention centers affected by clashes.

The move marked the first evacuation of refugees and migrants out of Libya since fighting escalated in Tripoli two weeks ago, the U.N. refugee agency said.

"Given the situation in Libya, humanitarian evacuations are a lifeline for detained refugees whose lives are in jeopardy in Libya," U.N. refugee chief Filippo Grandi said in a statement.

The operation came as fierce fighting continued between forces loyal to strongman Khalifa Haftar and those backing the internationally recognized Government of National Accord (GNA).

The renewed fighting has killed over 200 people and left more than 900 wounded, the World Health Organization said Thursday.

More than 25,000 have been displaced, according to the International Organization for Migration.

Dozens of women and children were among those evacuated on the UNHCR flight that landed in Niger early Friday morning.

They had all been held in detention centers near the frontlines of the conflict.

UNHCR said it had previously relocated many of them from the Abu Selim and Ain Zara centers to its Gathering and Departure Facility (GDF) in the center of the capital.

In all, it said, it had relocated 539 refugees from several detention centers near the immediate fighting zone.

But it said more than 3,000 refugees and migrants remain trapped in detention in areas where the fighting was raging.

The agency said it remained "extremely concerned" for the safety of those who remain "trapped inside detention centers and exposed to violence."

Grandi meanwhile hailed Niger for welcoming the refugees and urged other countries to follow suit.

"Niger's solidarity in receiving these refugees is world-leading and exemplary, but Niger cannot do this alone," he said.

"There must be shared responsibility and we need other countries to come forward to lend a hand and help bring vulnerable refugees out of Libya to safety."

UNHCR issued an urgent appeal to the international community to find solutions for all the trapped and detained refugees in Libya.

Among other things, it said there was a need for evacuations and humanitarian corridors to allow refugees in its GDF in Tripoli to find safety abroad.

It also said new such spaces were needed, since the facility had only limited capacity.