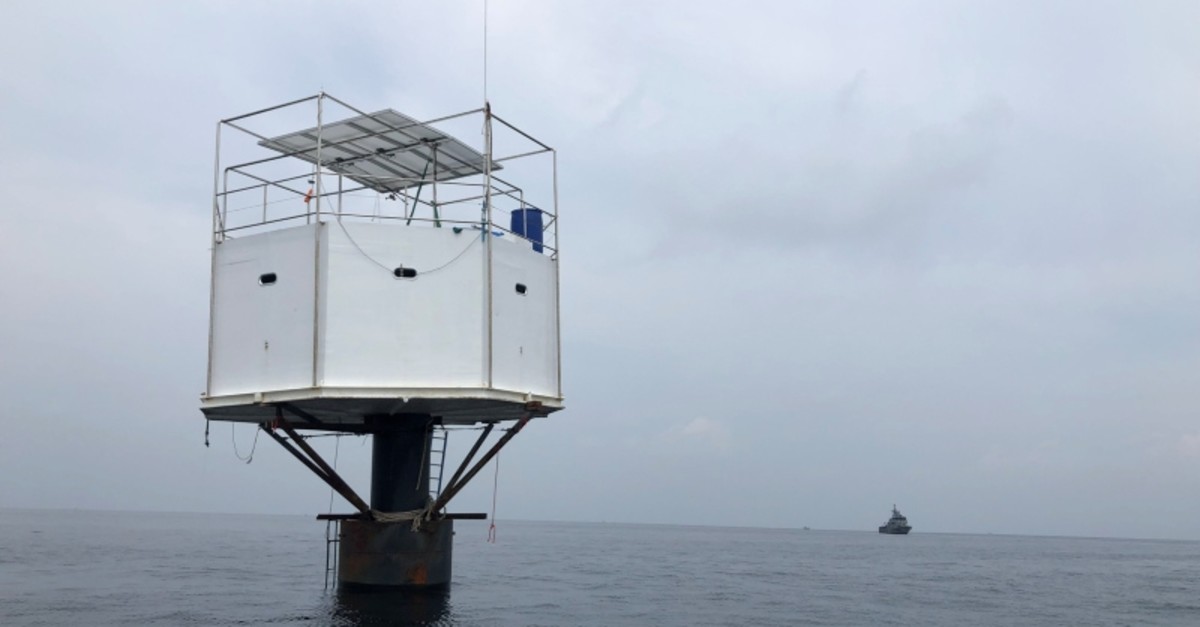 The Thai navy on Saturday boarded the floating cabin of a fugitive U.S. bitcoin trader and his Thai girlfriend, both prominent members of the "seasteading" movement who possibly face the death sentence for setting up their offshore home.

Thai authorities have revoked the visa of American citizen Chad Elwartowski and have charged him and his partner, Supranee Thepdet -- also known as Nadia Summergirl -- with violating Thai sovereignty by raising a small cabin on top of a weighted spar 14 nautical miles off the west-coast of Thai island of Phuket in the Andaman Sea.

The cabin has been promoted as "the world's first seastead" by the group Ocean Builders, part of a movement in tech and libertarian circles to build floating communities beyond the bounds of nations as a way to explore alternative societies and governments.

"This is ridiculous," Elwartowski said in an earlier statement posted online. "We lived on a floating house boat for a few weeks and now Thailand wants us killed."

The couple, who have gone into hiding, had been living part-time on a small structure they said was anchored outside Thailand's territorial waters. They were not there when the navy carried out their raid on Saturday.

"I was free for a moment. Probably the freest person in the world," Elwartowski posted on his Facebook account on April 13, days before the Thai navy raided his floating home.

Elwartowski, 46, and Supranee, whose Facebook page describes her as a "Bitcoin expert, Trader, Chef, seastead Pioneer", apparently fled after a surveillance plane flew over the cabin the previous day.

The Royal Thai Navy task force had planned on Saturday to seize the structure and tow it back to shore for use as evidence, but by the afternoon it was still studying how to move it without destroying it, the navy said.

In a video posted last month detailing the raising of the floating home, Elwartowski said 20 more similar houses would be up for sale to form a community.

Elwartowski and Ocean Builders say the spar was in international waters and beyond Thailand's jurisdiction. Thai authorities say the structure is in its 200-mile exclusive economic zone and therefore a violation of its sovereignty.

A Thai navy task force was sent out on Saturday to tow in the structure which will be handed over to Phuket's police to be kept as an exhibit for the legal action, the navy said in an official statement.

The Thai deputy naval commander responsible for the area said the project was a challenge to the country's authorities.

"This affects our national security and cannot be allowed," Rear Adm. Wintharat Kotchaseni told Thai media on Tuesday. He said the floating house also posed a safety threat to navigation if it broke loose because the area is considered a shipping lane.

The navy said they have evidence that the floating home was built in a private boatyard in Phuket and said the couple wanted to establish a "permanent settlement at sea beyond the sovereignty of nations by using a legal loophole."

It said the action "reveals the intention of disobeying the laws of Thailand as a littoral state and could lead to a creation of a new state within Thailand's territorial waters... undermining Thailand's national security as well as economic and social interests of maritime nations."

In an email reply to Reuters, Elwartowski referred all questions to the Seasteading Institute and pointed to online statements from the Ocean Builders website.

Elwartowski and Supranee are members of Ocean Builders, which has denied allegations that they were planning to set up an independent state or "micro nation", according to its online statement.

The groups said that the pair, both active bitcoin investors, did not build, invest in or design the floating home themselves but were "volunteers excited about the prospect of living free", documenting their lives as "pioneer seasteaders" off the coast of Phuket.

The U.S. Embassy in Bangkok told Reuters that Elwartowski had engaged a lawyer and was being provided with appropriate assistance.

According to Ocean Builders, the concept of "seasteading" has been discussed for years but the cabin Elwartowski and Supranee lived on was the first attempt at living in what it described as international waters.

Other groups, such as the Seasteading Institute, which was originally backed by PayPal co-founder Peter Thiel, have sought to build floating cities with the cooperation of host nations.

Several larger-scale projects are under development, but some in the seasteading community have credited the Andaman Sea house with being the first modern implementation of seasteading.

"The first thing to do is whatever I can to help Chad & Nadia, because living on a weird self-built structure and dreaming of future sovereignty should be considered harmless eccentricities, not major crimes," Patri Friedman, a former Google engineer who heads The Seasteading Institute, said on his Facebook page.