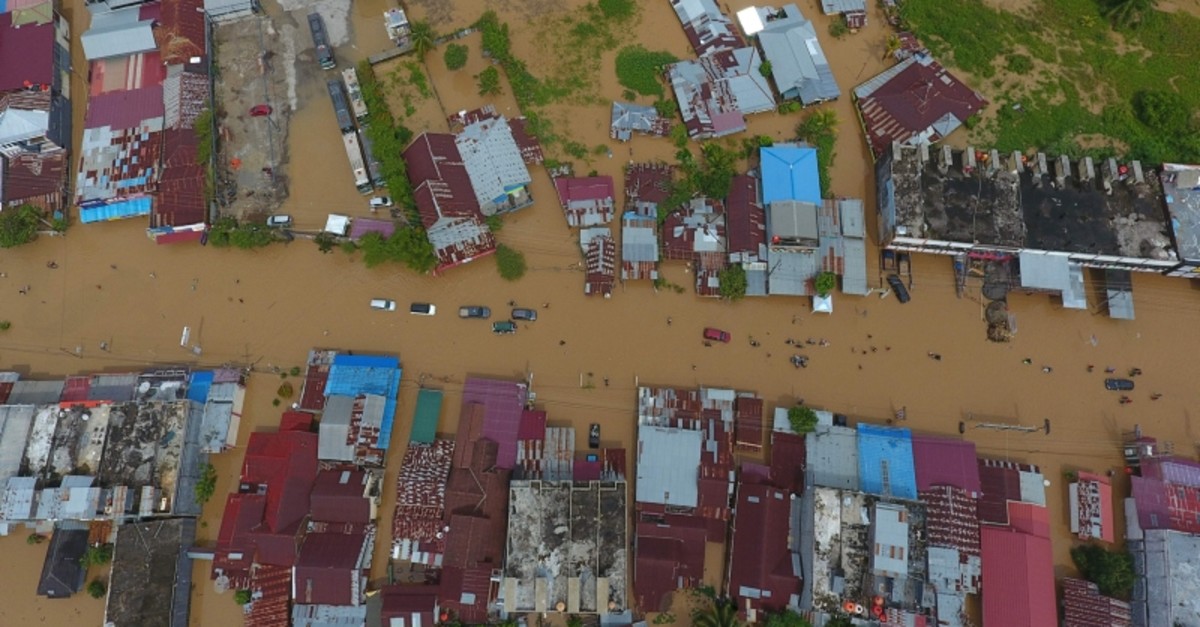 This aerial picture taken on April 27, 2019, shows a general view of submerged buildings after heavy rain caused flooding in Bengkulu on the Indonesian island of Sumatra. (AFP Photo)
by Apr 28, 2019 9:02 pm

At least 17 people are dead and nine missing after days of heavy rain-triggered floods and landslides on the Indonesian island of Sumatra, authorities said Sunday.

Some 12,000 people have been evacuated while hundreds of buildings, bridges and roads have been damaged by the severe weather which affected nine districts or towns across Bengkulu province, officials said.

The waters have receded in some places but officials warned the full extent of the damage was not yet known and some areas were still cut off.

"The impact of this disaster may increase," national disaster agency spokesman Sutopo Purwo Nugroho said, adding that several people were also injured in the flooding.

"Landslides and floods could happen again if rainfall is high," he said.

A "secondary disaster" in the form of skin diseases and acute respiratory infection due to poor hygiene and a lack of clean water was possible, he added.

Aerial images showed swollen rivers that had burst their banks and inundated settlements in some parts of the province.

Public kitchens and evacuation shelters have been set up to cater to about 13,000 people affected by the flooding, while search and rescue teams try to reach hard-hit areas with rubber boats.

"The distribution of aid has been hampered because road access has been cut off by the floods and landslides," Nugroho said, adding excavators were being used to clear debris from roads.

Landslides and floods are common in Indonesia, especially during the monsoon season between October and April, when rains lash the vast Southeast Asian archipelago.

Flooding in parts of the Indonesian capital Jakarta during the week killed at least two people and forced more than 2,000 to evacuate their homes.

Residents of Bogor, a satellite city of Jakarta, had to contend with about 14 pythons that were set loose from a private property due to the high waters.

Six of the snakes -- which were as long as four meters (13 feet) -- have been found, but the remaining eight remain on the loose, officials said.