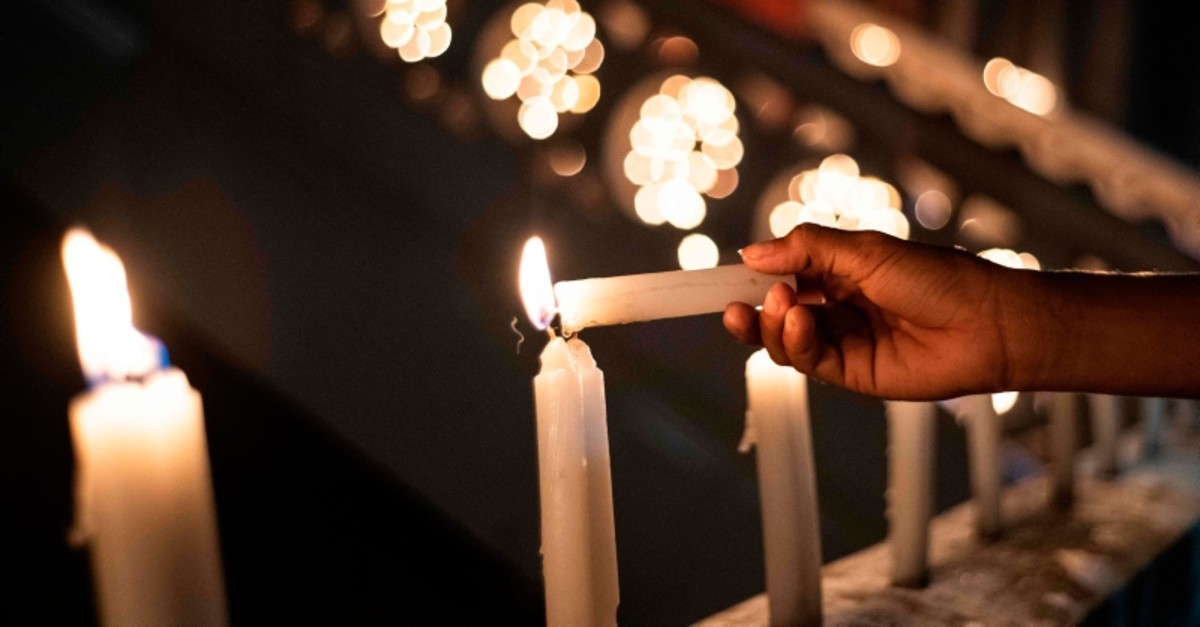 A mourner lights candles during a vigil in memory of the victims in Colombo on April 28, 2019, a week after a series of bomb blasts targeting churches and luxury hotels on Easter Sunday in Sri Lanka. (AFP Photo)
by Associated Press Apr 28, 2019 10:03 pm

The effects of Sri Lanka's Easter suicide bombings reverberated across two faiths Sunday, with Catholics shut out of their churches for fear of new attacks, left with only a televised Mass, and Muslim women ordered to stop wearing veils in public.

President Maithripala Sirisena banned all kinds of face coverings that may conceal people's identities on Sunday. The emergency law, which takes effect Monday, prevents Muslim women from veiling their faces.

The decision came after the Cabinet had proposed laws on face veils at a recent meeting. It had deferred the matter until talks with Islamic clerics could be held, on the advice of Prime Minister Ranil Wickremesinghe.

Catholics across the nation knelt before their televisions as Cardinal Malcolm Ranjith, the archbishop of Colombo, delivered a homily before members of the clergy and the country's leaders in a small chapel at his residence in the capital.

The closing of all of Sri Lanka's Catholic churches — an extraordinary measure unheard of in the church's centuries on this island off the southern tip of India — came after local officials and the U.S. Embassy in Colombo warned that more militants remained on the loose with explosives a week after bombings claimed by the Daesh terror group and aimed at churches and hotels killed more than 250 people.

Before services began, Daesh claimed three militants who blew themselves up Friday night after exchanging fire with police in the country's east. Investigators sifting through that site and others uncovered a bomb-making operation capable of spreading far more destruction.

"This is a time our hearts are tested by the great destruction that took place last Sunday," Ranjith told those watching across the nation. "This is a time questions such as, does God truly love us, does he have compassion toward us, can arise in human hearts."

In a rare show of unity, Sirisena, Wickremesinghe and opposition leader Mahinda Rajapaksa had attended the Mass in person. Their political rivalry and government dysfunction are blamed for a failure to act upon near-specific information received from foreign intelligence agencies that preceded the bombings, which targeted three churches and three luxury hotels.

Police said they had arrested 48 suspects over the last 24 hours as checkpoints mounted by all of Sri Lanka's security forces sprung up across this country of 21 million people. Those arrested include two men whom authorities recently appealed to the public to locate.

The government also warned that it would crack down on those spreading false information and making inflammatory remarks.

Police, meanwhile, entered the main mosque of National Towheed Jamaat on Sunday afternoon, just a day after authorities declared it and another organization terror groups over the bombings.

Police entered the mosque, located in Kattankudy in eastern Sri Lanka, and stopped an interview among foreign journalists and mosque officials. Later, a senior police officer dispersed journalists waiting outside, saying authorities were conducting a "cordon and search operation."

Police then left, locking up the mosque just before afternoon prayers were to start.

Authorities banned National Towheed Jamaat over its ties to Mohammed Zahran, the alleged mastermind of the Easter Sunday bombings. Zahran and masked others had pledged their loyalty to Daesh leader Abu Bakr al-Baghdadi before carrying out the attacks, showing the danger the terrorist group poses even after losing all its territory in Iraq and Syria.

On Friday night, a confrontation with police sparked a firefight with the militants in Kalmunai, some 225 kilometers (140 miles) northeast of Colombo. Sri Lanka's military said the gunfire and later suicide blasts killed 15 people, including six children.

On Sunday, the Daesh group claimed three of the militants who blew themselves up there. In a statement carried by the terrorists' Aamaq news agency, Daesh identified the bombers by their noms du guerre as Abu Hammad, Abu Sufyan and Abu al-Qa'qa. It said they opened fire with automatic weapons and "after exhausting their ammunition, detonated ... their explosive belts."

Police spokesman Ruwan Gunasekara said a woman and a 4-year-old child found wounded after the gunbattle have been identified as Zahran's wife and daughter.

At the main police station in Ampara, an outdoor stage now holds what police recovered after the firefight. The Daesh-aligned militants had created a bomb-making factory at the home, complete with laboratory-style beakers and thick rubber gloves.

A police investigator, who spoke to The Associated Press on condition of anonymity because he wasn't authorized to publicly comment, said the mix of acids worsened the wounds suffered by those who didn't immediately die in the blast.

"At the hospital a lot more people died. That's why," he said, nodding toward the acids. "It made the wounds incurable."

The bombers likely carried two rectangular detonators in their pockets similar to the ones recovered, the investigator said. A red switch armed the explosives, while a light teal button detonated the bombs hidden inside of their large backpacks.

Along with the acids, the bombs contained a mixture of fertilizer, gunpowder, ball bearings and explosives typically used by quarries to blast loose rocks, the investigator said. Those explosives made the bombs powerful enough to blow the roof off of St. Sebastian's Church in Negombo, he said, referring to one of the churches near Colombo targeted in the Easter attacks.

The Sri Lankan navy controls the sale of the mining explosives and investigators already have begun tracing the serial numbers off of the plastic sticks, he said. A notebook contained bomb-making instructions that had apparently been explained to the writer.

Police also recovered religious tracts in Tamil glorifying suicide bombings, saying they granted the attacker direct entrance to heaven. The investigator contrasted that to the Tamil Tigers, a separatist group the government defeated in 2009 after a 26-year civil war.