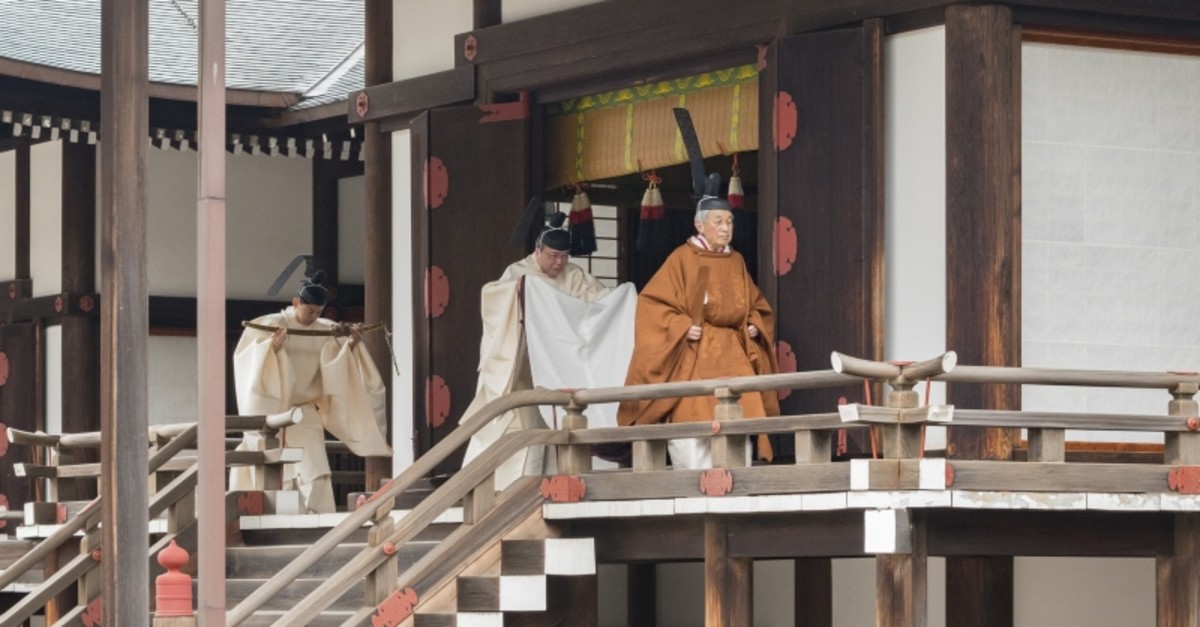 Emperor Akihito of Japan formally stepped down Tuesday, the first abdication for 200 years in the world's oldest monarchy, as his son Naruhito ascended to the Chrysanthemum Throne and usher in a new imperial era "Reiwa."

In the "Room of Pine" in Tokyo's Imperial Palace, the popular 85-year-old performed the abdication ritual in the presence of the imperial regalia -- an ancient sword and sacred jewel that are considered to legitimize an emperor.

In his final speech, Akihito offered his "deepest heartfelt gratitude to the people of Japan" and said he would "pray for the peace and happiness of all the people in Japan and around the world."

During a 10-minute ceremony in the Imperial Palace's elegant Room of Pine, he stopped to offer a hand to his wife of 60 years, Michiko, as she stepped down from the stage and poignantly paused before exiting the room, bowing deeply to the 300 invited guests. 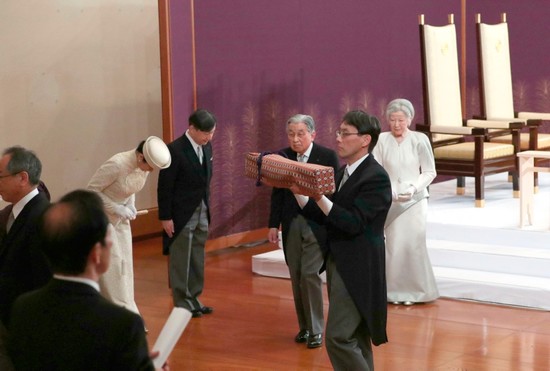 Emperor Akihito, accompanied by Empress Michiko, right, leaves after the ceremony of his abdication as Crown Prince Naruhito and Crown Princess Masako bow at the Imperial Palace in Tokyo, Tuesday, April 30, 2019. (Japan Pool via AP)

Despite near-constant rain in Tokyo, several hundred wellwishers congregated outside the Palace during the historic ceremony attended by around 300 people, including Prime Minister Shinzo Abe and around a dozen members of the royal family.

"In the past, enthronements followed the death of emperors and people weren't sure whether they should be happy and celebrating, but with this transition, I am sure that we can celebrate while welcoming the new era," she said.

Akihito will technically remain emperor until the stroke of midnight when Naruhito takes over and the new era of "Reiwa" -- meaning "beautiful harmony" -- begins, lasting for as long as he reigns.

Naruhito ascended Chrysanthemum throne Wednesday at the stroke of midnight. In a separate ceremony, he will inherit the Imperial regalia of sword and jewel, as well as Imperial seals as proof of his succession as the nation's 126th emperor, according to the palace count, which historians say could include mythical figures until around the 5th century. The third piece of the imperial regalia -- a mirror -- never leaves the palace.

Hours before the abdication ceremony, many people were gathering outside the palace compound despite unseasonably wet and cold weather, and even though they are not allowed to look inside.

"We came because today is the last day of (the emperor's era of) Heisei, and we feel nostalgic," said Akemi Yamauchi, 55, standing outside the palace with her husband.

"We like the current emperor. He has worked hard for the people, he is very thoughtful, and kind to everyone," said her husband, Kaname. The couple came from Kyoto, Japan's ancient capital where emperors lived until about 150 years ago.

Outside Tokyo, locals wearing kimonos performed a traditional dance in Gifu, central Japan, to mark the imperial transition -- planning to dance all night.

Several couples held their wedding ceremonies at midnight at hotels to join the national celebration.

And crowds braved torrential rain to see in the new era at Tokyo's famous Shibuya crossing.

"The emperor was a good person. He played an important role during the March 11 quake. He was the symbol of Japan. I hope the new emperor will carry on the kindness the old emperor had," said Rika Yamamoto, a 24-year-old company employee sheltering under an umbrella on the crossing.

However, not everything was beautiful and harmonious as minor scuffles broke out near Shinjuku, the world's busiest station, with right-wingers briefly clashing with anti-monarchy protesters.

Messages have come from global leaders.

South Korean President Moon Jae-in expressed gratitude in a letter to Akihito for his emphasis on peace and contributions to developing relations between Seoul and Tokyo. President Donald Trump expressed "appreciation" for his contribution to the two countries' close relations. Trump had a courtesy meeting with Akihito during his 2017 Japan visit and will be the first foreign leader in May to meet the new emperor.

Japanese television talk shows are displaying a countdown to the midnight transition, and programming was dominated by the abdication and looking back to major events of Akihito's era that included the 2011 tsunami, another deadly earthquake in Kobe in 1995 and the Tokyo subway nerve gas attack that shook Japan's sense of safety and confidence. Security was extremely tight around the palace and across downtown Tokyo with thousands of police mobilized. Police had arrested a man Monday night on suspicion of placing a pair of kitchen knives last week on the school desk used by Akihito's grandson.

Akihito, 85, took the throne in 1989 and devoted his career to making amends for a war fought in his father's name while bringing the aloof monarchy closer to the people.

With his commoner-born wife, Empress Michiko, he reached out to the people, especially those who faced handicaps and discrimination, as well as those hit by disasters, illuminating the hardships of people often overlooked by society. Akihito was the first emperor to marry a commoner, one of many changes he brought to the palace. The couple also chose to raise their three children instead of leaving them with palace staff, and decided to be cremated upon their deaths in a smaller tomb side by side, also a tradition-breaking step.

Jeff Kingston, Asian studies director at Temple University, Japan Campus, says Akihito has served Japan's "chief emissary of reconciliation," while acting as "consoler in chief" in reaching out to the people. Akihito was also a "strong advocate of the vulnerable and the marginalized in the Japanese society, he said. "I think the people really warmed to him and felt that the monarchy was relevant to their lives because of these efforts by Akihito."

Recent media surveys have shown public support for the imperial family at 80%, the highest ever for the institution.

Such respect did not come overnight. Akihito grew up during World War II and was 11 when his father Hirohito announced the end of the war on radio. Akihito embraced his role as peacemaker and often represented his father on reconciliatory missions as young crown prince, decades before he became the emperor himself.

He is the first emperor in Japan's modern history whose era did not have a war. Though he has avoided outright apologies, he has stepped up his expressions of regret in carefully scripted statements on the war.

Akihito visited China in 1992 and offered what was considered the strongest expression of regret over the war. He has also visited the Philippines and other Pacific islands conquered by Japan that were devastated in fierce fighting as the U.S.-led allies took them back.

That leaves his son Naruhito — the first emperor born after World War II — largely free of the burden of wartime legacy, allowing him to seek his own role. Naruhito has said he would largely emulate his father's pacifist stance and compassion for the people, but also said he hopes to seek a role of his own, possibly in issues related to water, which he studied Oxford University in the early 1980s. That, or disaster resilience, or environment, could appeal more to his people who are predominantly from postwar generations.

Akihito will be known as the emperor emeritus and will no longer have official duties after he abdicates. He won't even attend his son's succession rituals so as not to interfere with the serving emperor.

Akihito is expected to enjoy his retirement, going to museums and concerts, or spending time on his goby research at a seaside Imperial villa. Akihito and Michiko will move to a temporary royal residence before eventually switching places with Naruhito.