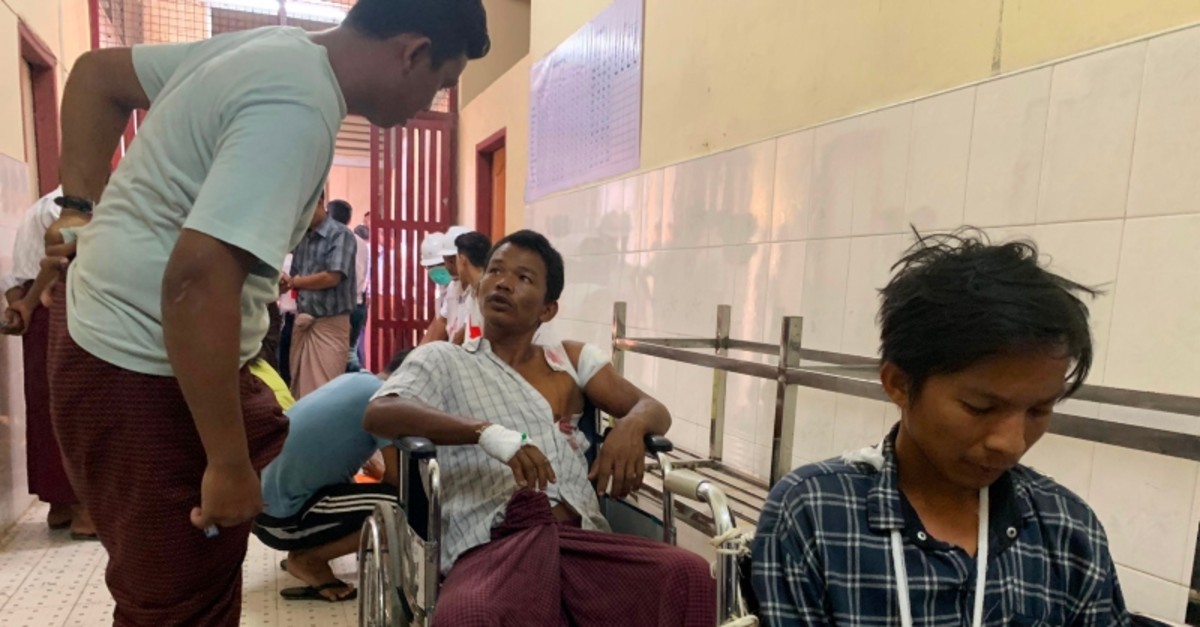 Injured people from Kyauk Tan village in Rathedaung township wait in a hospital in Rakhine state's capital Sittwe in western Myanmar on May 2, 2019. (AFP Photo)
by Compiled from Wire Services May 02, 2019 8:25 pm

Myanmar military on Thursday shot dead seven civilians, who were among many villagers detained for interrogation in the country's Rakhine state, a lawmaker said.

The military earlier this week announced that it rounded up several hundred people in several villages in Rakhine state's Yathay Taung Township for questioning for their alleged ties to the Arakan Army, an ethnic rebel group.

It also said 275 men were held for interrogation at a school in Kyauk Tan village in Yathay Taung Township.

Soldiers on Thursday opened fire as a clash erupted with the detained villagers, according to Khim Maung Lat, a member of the country's upper house of the parliament.

"Seven villagers were shot dead and eight others were seriously injured," he told Anadolu Agency by phone.

"Before this accident, four civilians were also killed during the interrogation in other villages," he said.

The lawmaker said the military has ignored the request made by regional parliament to hand over the detainees to police.

"Civilians are being killed. It is unacceptable," he added.

According to him, the villagers attempt to seize weapons and harm the security forces during the interrogation.

The International Committee of the Red Cross and Myanmar Red Cross said in a statement they had transferred three "seriously injured patients" to hospital in the state capital of Sittwe, as well as two other "civilians" to a local hospital.

"The ICRC is concerned about increasing numbers of civilian casualties during the recent weeks, and urge all parties to the conflict to protect the civilian population in line with International Humanitarian Law," said Stephan Sakalian, head of delegation in Myanmar for the ICRC.

Rakhine came to global attention after about 730,000 Rohingya Muslims crossed into Bangladesh fleeing a military crackdown in response to militant attacks in 2017. U.N. investigators have called for senior military officers to be prosecuted over allegations of mass killings, gang rapes and arson. The military denies widespread wrongdoing.

More recently, civilians have been caught up in clashes between the military and the Arakan Army, an insurgent group that recruits from the mainly Buddhist ethnic Rakhine population and is fighting for greater autonomy for the state.

Since November, the fighting has displaced nearly 33,000 people across a large part of central and northern Rakhine and part of neighboring Chin state, according to the U.N. Office for the Coordination of Humanitarian Affairs.

The military has initiated legal action against two news organizations, accusing them of defamation for reports that detailed the alleged shooting of civilians by soldiers in March.

Zaw Min Tun told Reuters military and police searching the Rathedaung area's Kyauk Tan village for suspected Arakan Army members found scores of people who were not registered with authorities as living there, so gathered those people in the school.

As well as those killed in the shooting, eight people had been brought to the hospital in nearby Zedi Pyin village with gunshots wounds, said Maung Soe Win, chairman of the Mayu Region Development Association, a local community group, who was at the hospital.

The injured people said they had been detained for two days when one villager with a mental health problem "got up, shouted and ran away in the middle of the night," said Maung Soe Win.

"Then (security forces) shot the villagers continuously," he told Reuters by phone.

Another military spokesman, Major General Tun Tun Nyi, said on Thursday afternoon the remaining villagers were still being held at the school and investigated for links to the Arakan Army.