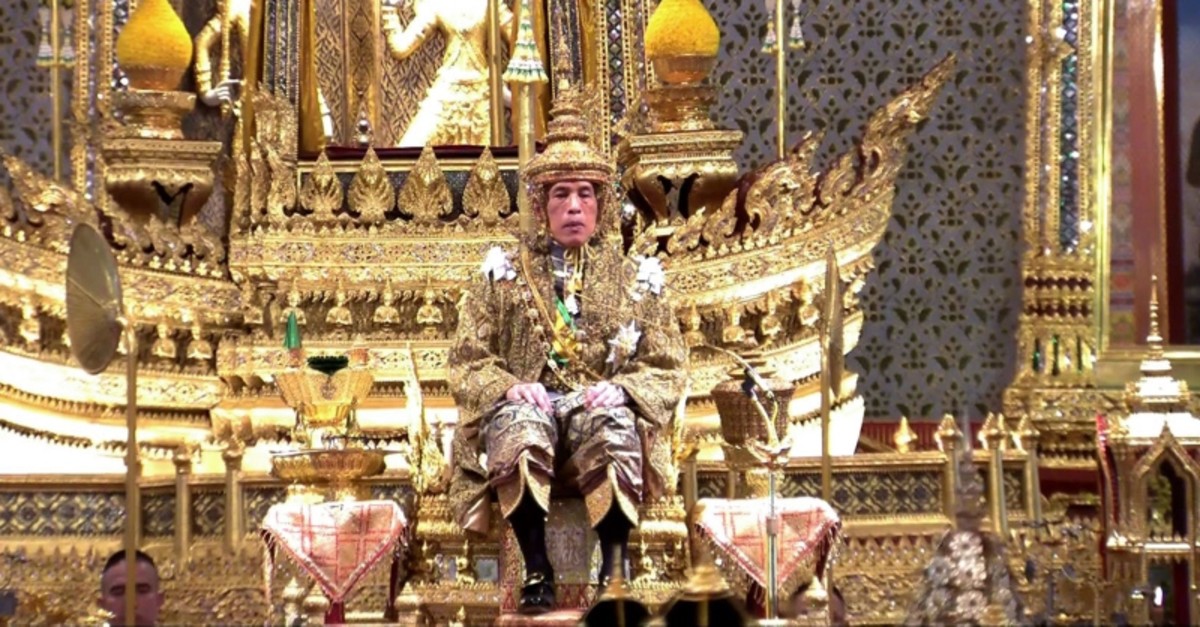 This screengrab from Thai TV Pool video taken on May 4, 2019 shows Thailand's King Maha Vajiralongkorn facing the audience wearing the gold crown while sitting on the throne during his coronation at the Grand Palace in Bangkok. (AFP Photo)
by Compiled from Wire Services May 04, 2019 2:09 pm

Thailand's King Maha Vajiralongkorn was officially crowned Saturday amid the splendor of the country's Grand Palace, taking the central role in an elaborate centuries-old royal ceremony that was last held almost seven decades ago.

The coronation represents a renewal of the monarchy's power after the October 2016 death at age 88 of Vajiralongkorn's revered father, King Bhumibol Adulyadej. It also comes amid more than a decade of political strife, including a 2014 military coup and a contentious election less than two months ago.

After completing the rites, Vajiralongkorn issued his first royal command, which is supposed to set the tone for his reign. It closely echoed the words of his father's first command.

"I will pursue, preserve and extend, and reign with righteousness for the benefit and happiness of the people forever," the king said, according to an unofficial translation.

The 66-year-old Vajiralongkorn has served as king for more than two years since assuming the throne. On Saturday, he received his crown from the chief Brahmin, a Hindu priest who played a guiding role in the mixed Buddhist-Hindu ceremony, which was televised live across the nation on all channels.

The king, known as Rama X for being the 10th monarch in the Chakri dynasty, then placed atop his head the crown, which is more than 200 years old. The "Great Crown of Victory" is 66 centimeters (26 inches) high, weighs 7.3 kilograms (16 pounds) and is ornamented with diamonds set in gold enamel. It was one of several pieces of royal regalia presented in homage to his power.

The king began the coronation proceedings wearing a simple white robe as he entered a small pavilion where he was briefly showered with water from several holy rivers and ponds and other sources. Other water was poured on him from old royal water vessels. The rite, known as the Royal Purification Ceremony, took place amid music from drums, conch shells and other instruments. Outside the palace, artillery was fired in a salute to the monarch.

A second rite, the Royal Anointment Ceremony, completed the consecration portion of his coronation, giving him the legitimacy of being a fully sovereign king. Vajiralongkorn — having changed into gold-embroidered royal vestments — was seated on an octagonal throne, with the sides representing the cardinal points of the compass, and a dignitary seated at each point. Each poured holy water over the king's hand, along with a ninth representing the heavens.

That rite ended with the monarch being presented with a nine-tiered white umbrella of state, symbolizing his full consecration.

"This ceremony is significant to Thailand because the monarchy ... is a very important institution of our country and is the soul of our nation," said Naowarat Buakluan, a civil servant. "If you ask why the ceremony is being held this year when his majesty has already ascended the throne, it's because this is the right moment. Previously we Thais were mourning the loss of our beloved late king."

Vajiralongkorn since taking the throne has tightened control over royal institutions and acted to increase his influence in his country's administration. The powers he acquired centralize royal authority in his hands and make explicit his right to intervene in government affairs, especially in times of political crisis.

He inherits a nation in political turmoil, with the powerful army entrenched in government for five years after staging a coup in 2014. An election held in March has been widely seen as rigged through convoluted election laws to favor the military and its preferred candidate, Prayuth Chan-ocha, who led the coup and has headed the government since then.

Vajiralongkorn, said prominent intellectual and social critic Sulak Sivaraksa, "doesn't like ceremony himself, personally, but when it is performed he wants it to be proper." When his father was cremated in 2017, Vajiralongkorn "insisted that everything had to be done properly."

Vajiralongkorn presented his wife with the traditional regalia of a Thai queen as one of his first acts after being crowned. On Wednesday he appointed Suthida Vajiralongkorn Na Ayudhya to be the country's queen. His father Bhumibol married his bride, Sirikit Kitiyakara, just a week before his own coronation, at which he named her his queen. Now 86 but ailing, she survives him.

After the two and a half hours of ceremonies ended, Vajiralongkorn stepped from his throne, walked in front of other royal family members and scattered in his path tiny flowers of silver and gold, representing heavenly gifts for them to collect.

Despite not being able to see the king in person, civil servants in uniform and members of the public wearing garb in the royal color of yellow gathered outside the Grand Palace to pay their respects.

"I prepared to come here since a while ago, after I heard the news (about the coronation) and the appointment of the queen," said Praiwan Thasai, a vendor.

Later Saturday, the king was to receive members of the royal family, the Privy Council and Cabinet, among other senior officials, who will pay their respects. Afterward he will visit the Temple of the Emerald Buddha to announce he is the royal defender of Buddhism. The day's events end with a ceremony of the Assumption of the Royal Residence, a symbolic palace housewarming.

On Sunday, there will be a 7-kilometer (4.3-mile) royal procession involving 343 men, some of them carrying the king through old Bangkok in an ornately decorated palanquin, allowing Thais to pay homage to their new king.

Monday will see the king greet the public from the balcony of the Grand Palace in the late afternoon and then hold a reception for the diplomatic corps.

Here is a brief look at key moments for Thailand's revered monarchy:

The ruling Chakri dynasty emerged in 1782.

That year King Rama I establishes the new capital of Siam on the banks of the Chao Praya river. It was the beginnings of modern-day Bangkok.

King Chulalongkorn, or Rama V, took power in 1868. Seen as a reformer, he modernised the economy and civil service, sending his children abroad for education.

One of his sons, a prince, falls in love with a commoner. In December 1927, she gives birth to future ruler Bhumibol Adulyadej in Cambridge, Massachusetts.

On June 24, 1932, King Prajadhipok falls in a bloodless coup. A constitutional monarchy is introduced by reformers in the government and military.

In 1935, Bhumibol's older brother, Ananda Mahidol, is crowned king of Thailand after his uncle Prajadhipok abdicates.

On June 9, 1946, his 18-year-old brother Bhumibol Adulyadej assumes the throne after Ananda dies in a mysterious shooting in his Grand Palace bedroom.

Royalists bring back rituals and customs reinforcing the monarchy's role in Thai society.

Bhumibol marries Queen Sirikit on April 28, 1950, a week before his coronation.

The king and queen have four children. Their only son is Vajiralongkorn.

Thailand was considered a key U.S. ally in the fight against communism as it spread through Southeast Asia.

In the 1960s and 1970s, the US flies bombing sorties from bases in the country. Thai troops known as the Queen's Cobras join the fight in Vietnam.

Thailand fights a simmering communist insurgency at home at a time when monarchs were ousted by left-wing forces in Cambodia and Laos.

In October 1973, scores are killed when a military dictatorship cracks down on pro-democracy protests.

Bhumibol asks the prime minister to leave the country and later appoints a new premier, leading to a brief flowering of democracy.

The same year, 1976, the penalty for breaching Thailand's royal insult law is toughened to 15 years.

In 1992, hundreds of thousands of pro-democracy protesters fill the streets of Bangkok demanding a return to civilian rule. Dozens are killed by the army in what is later known as "Black May".

In a dramatic televised broadcast, the king admonishes the two leaders from each side at the palace and tells them to reconcile, cementing his mythic status as a unifying force.

In 2006, a bloodless coup ousts billionaire and populist prime minister Thaksin Shinawatra while he is at the UN.

The coup sparks years of protests in a country split between Thaksin's supporters -- many of whom are in the rural north -- and his foes among the Bangkok-based elite in the palace, military and bureaucracy.

In August 2009, the king makes a rare speech warning that the country could collapse if feuding factions do not unite.

Thailand's junta seizes power in 2014 and topples the administration of Thaksin's sister Yingluck after months of violent street protests.

In September 2016, the palace announces the king has received treatment for a "severe" blood infection. Bhumibol dies the next month and Thailand is plunged into mourning.

In early 2019, a party linked to Thaksin puts forward Vajiralongkorn's older sister as its prime ministerial candidate, a shock move in a country where the monarchy is nominally above politics.

Days before Vajiralongkorn's May 4 coronation the palace announces he has married Suthida Vajiralongkorn na Ayudhya, a former flight attendant who joined his royal guard.

She is invested as Queen during the first day of the ceremony.