Trying to prove that you exist: Plight of Rohingya Muslims 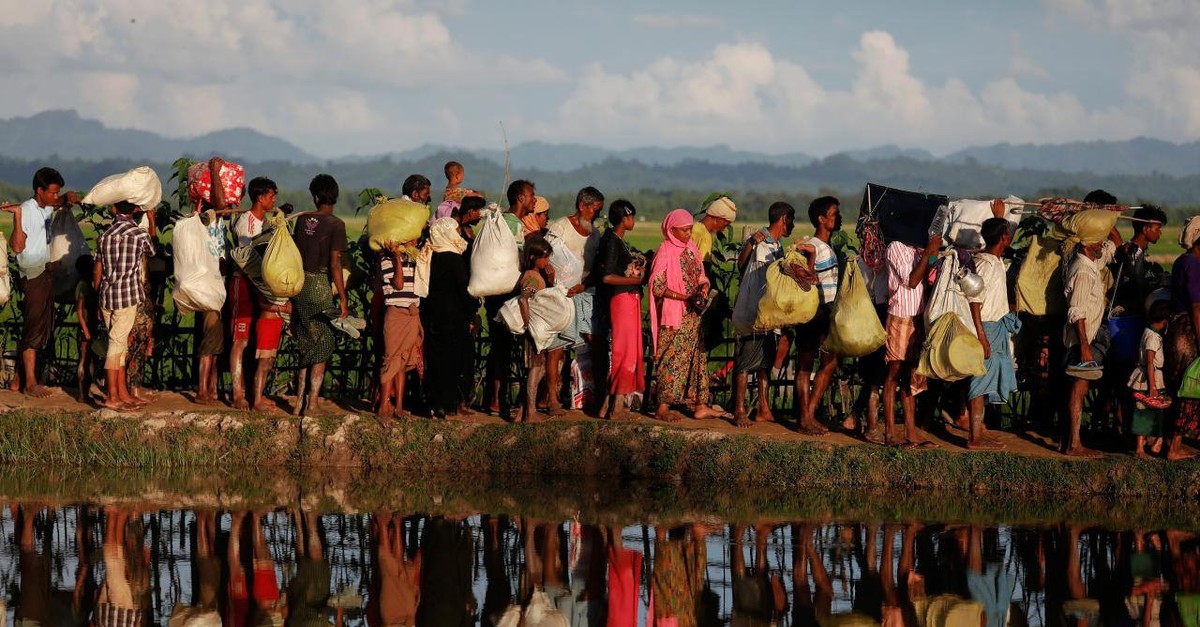 Rohingya refugees who fled Myanmar wait to be let through by Bangladeshi border guards after crossing the border in Palang Khali, Bangladesh, Oct. 9, 2017.
by Ayşe Betül Bal
May 06, 2019 12:10 am

Declared the world's most persecuted people, Rohingya people have been facing atrocities for years. Members of the Rohingya diaspora told Daily Sabah their stories of oppression

Imagine one day you wake up in a country that you have known as your native land, you have been calling home, to which your great-grandparents called home and a person says, "No, you are not accepted here anymore, go." This is what the Rohingya Muslim minority in the Rakhine State of Burma, which later became Myanmar, one of the most ethnically divided countries in the world, has been subjected to for decades. "Arakan is our native land. But Burmese people say that these people were brought by the British government."

"They call us refugees," said Abul Kalam, a Rohingya Muslim from the diaspora who left the country with his family when he was 12-years-old due to government atrocities, along with thousands of others and crossed into nearby Pakistan, during our interview in Istanbul where he came to participate in a media event, the Rohingya Media Training Program, organized by Presidency For Turks Abroad And Related Communities (YTB).

The Arakanese people, also known as Rohingyas, inherited the Arakan coastal region of Myanmar, according to historical sources, and the name Rohingya derives from the historical name of the region, Rohang, which later was changed to Rakhine in the 1990s.

Abul Kalam, who is the chairman of the Swedish Rohingya Association (SRA) and founding council member of the European Rohingya Council, said that he left Pakistan as well, to get a proper education and came to the Turkish capital Ankara before leaving for Sweden as his final destination. 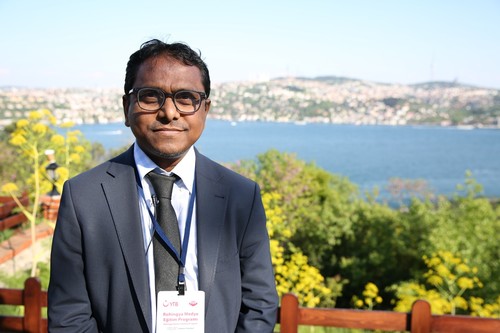 "We were not allowed to stay in our homeland; we still are not, but those who were actually brought by the British colonizers are still inside Burma, living there, in big cities," said Kalam, explaining that when Burma was a British colony there were many people who were brought from several places, including Africa, Afghanistan, India or Pakistan as workers or soldiers, many of whom later departed when the country gained its independence from Britain in 1948 after 60 years, according to historical sources that are easily accessible, especially in European countries, while there is a very limited information about Arakanese history in Arakan itself.

Conflict and clashes in the region increased the pressure by the Buddhists on Muslims in the region. Tensions between the Muslims of the Rohingya community and the country's major ethnic group, the Burmese, have existed for decades but things got out of control in 1982 when the Burmese junta, which was then governing the country, passed a citizenship law that identified only eight ethnicities entitled to hold official citizenship. The Rohingya people were not included among those ethnic groups, leaving hundreds of thousands of people belonging to the Muslim community stateless.

Rohingya Muslims, described by the United Nations as the world's most persecuted people, gradually have lost everything since then, losing their basic civil rights and becoming victims of mass violence from rape to mass killings. "The situation was always the same for us, but one thing was different; that time there was no electronic media, no Internet access, and no smartphones. We lost everything," added Kalam.

Diaspora members who spoke to Daily Sabah underline that there are different reasons why they have been facing such atrocities for years, such as, "They are different from the Burmese in both physical appearance and religion," along with the political profits of other countries.

Rohingyas are not the only ones who think that the problem is having a different faith than the rest, as this is actually what the Buddhist majority thinks with a fear of a so-called "Islamic occupation," an ignorant thought at best, in a country with only a 4 percent Muslim population.

"Arakan is a borderline between Buddhist Burma and Muslim Bangladesh. Some Buddhist monks have extremist thoughts such as our people are working for Islamization," said a Rohingyan Ph.D. student from the diaspora who have been living in Malaysia who wanted his name to be withheld for security reasons.

The government uses "Burmanization" against minorities, as proven by many international nongovernmental organizations (NGOs) and media reports, to defeat "those who do not belong to the country." Government atrocities towards Rohingyas were more recently called by the then U.N. human-rights chief Zeid Ra'ad al-Hussein as a "textbook example of ethnic cleansing," after the Burmese military and local militia forced more than 300,000 Rohingya Muslims to flee to neighboring Bangladesh in a crackdown on their villages in 2017.

More than 34,000 Rohingya were also thrown into fires, while over 114,000 others were beaten, said the OIDA report: "Forced Migration of Rohingya: The Untold Experience."

'They are waiting to die in their homes'

"More than hundred and thousands of people still remain in Arakan, including those forced to live in places separated for Internationally Displaced People (IDPs) said Kalam, adding, "Those people are waiting to die in their homes as there is no food, no health care, no nothing."

"There is fighting and clashes day and night between several groups, including the military and Buddhist separatists," added Kalam, noting that the target and the victims are always the Muslim community, which is not allowed to leave its villages even to earn money to buy foods for their children.

He said that those imprisoned in their own homes are trying to survive by cooking and boiling banana trees or collecting bamboo tranches from the jungle.

One of the main problems in the areas for IDPs is the mafia and human trafficking said Kalam, noting that those who pay money to the mafia to reach neighboring Bangladesh are either killed after the mafia informs the police or given National Verification Cards (NVCs) by police.

NVCs, identity cards that define Rohingyas as Bengali refuges instead of Myanmar citizens, make the Muslim community officially "stateless," which is described by the Rohingyas as, "The very simplest example of the continuing deprivation of their rights."

The plague for Rohingyas continues in neighboring countries where they live as refugees, suffering from problems such as a lack of education for children and lack of food, health care or hygiene and abuse by aid workers.

"There are some NGOs working in the camps or some personnel belonging to worldwide known NGOs who are themselves involved in human trafficking. They first give gifts to impress, especially women and children, then they use them as maids or prostitutes," said the Rohingyan Ph.D. student who did not want to divulge his name.

"Not just women, even kids, both male and female, are the victims of continuing sexual abuse," added Minara Begum, once a Rohingyan refuge living in the camps, who is now an Australian citizen, stressing that women who have children by the Burmese military or got pregnant by them are not even accepted in refugee camps; they are kept in separate areas with no therapeutic treatment for what they have been lived through or witnessed.

Some 18,000 Rohingya women and girls were raped by Myanmar's army and police, and over 115,000 Rohingya homes were burned and 113,000 others vandalized, the OIDA report said.

The U.N. has also documented mass gang rapes, killings, including of infants and young children, brutal beatings and disappearances committed by Myanmar state forces. In a report, U.N. investigators said such violations might have constituted crimes against humanity.

Another member of the diaspora, who have been living in Bangladesh and whose name was also withheld due to security reasons said that some volunteers even use refuges for their medical experiments.

The Rohingya diaspora sees education as one of the key factors to overcome their problems, a sustainable way that requires time as now hundreds of young Rohingyas face a gloomy fate without having received basic education in refugee camps or in Arakan.

"We don't know when the problem will be solved since tomorrow seems darker than today to us," said the Ph.D. student, adding, "If there is no education, the Rohingya people will be a heavier burden to the countries where they have been living as refugees," a dispiriting prediction by a person that the international community has turned a blind eye to for a long time.