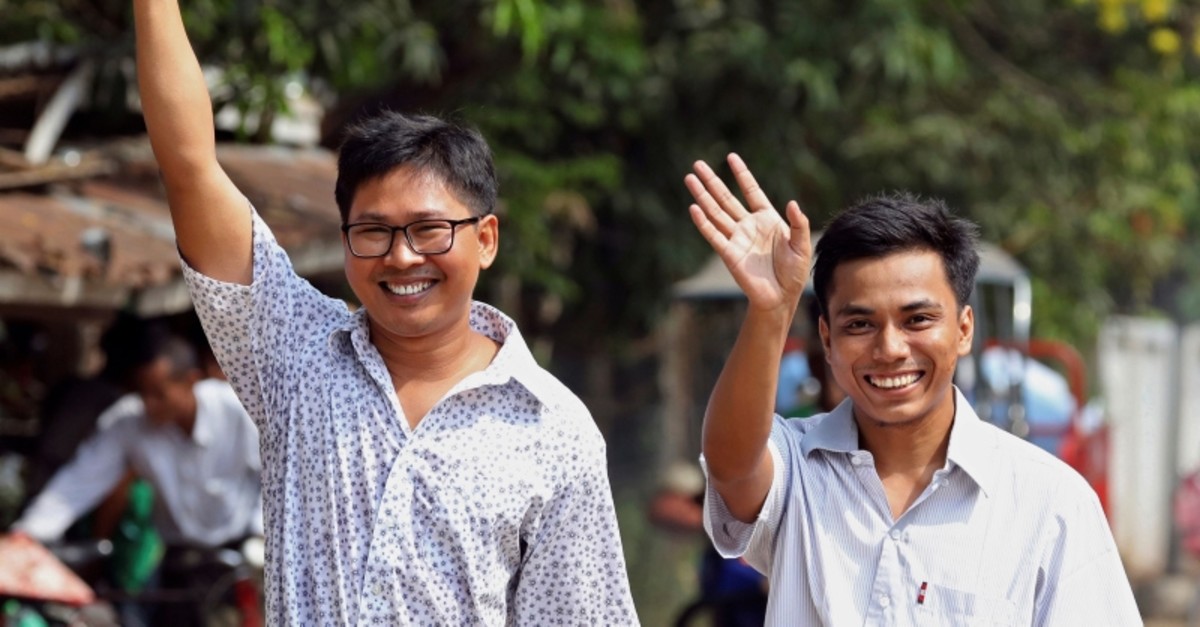 Two Reuters journalists jailed for their reporting on the Rohingya crisis in Myanmar walked out of prison on Tuesday, freed in a presidential amnesty after a vigorous global campaign for their release.

Wa Lone and Kyaw Soe Oo were mobbed by media as they stepped out of Yangon's notorious Insein prison after more than 16 months in detention.

Their December 2017 arrests made them an international cause celebre and a sign of Myanmar's deteriorating press freedoms under Nobel laureate and civilian leader Aung San Suu Kyi.

Wa Lone, 33, thanked people from "around the world" for advocating for their release and vowed he would return to work.

"I can't wait to go to my newsroom," he said. "I am a journalist and I am going to continue."

Reuters editor-in-chief Stephen Adler said: "We are enormously pleased that Myanmar has released our courageous reporters."

"Since their arrests 511 days ago, they have become symbols of the importance of press freedom around the world. We welcome their return."

They were freed in an amnesty that included more than 6,000 prisoners.

A government spokesman told reporters that family members had sent letters to Suu Kyi and the president Win Myint.

"After leaders took into consideration the long-term interest of (the) country, two Reuters journalists were released," spokesman Zaw Htay said.

The two men waved and smiled broadly as they walked out of the jail.

The pair were convicted on charges of violating the official secrets act and sentenced to seven years each.

At the time of their arrest, they had been reporting on a September 2017 massacre of 10 Rohingya Muslims in conflict-hit Rakhine state, where the Myanmar army forced some 740,000 of the stateless minority to flee over the border to Bangladesh.

The case prompted an outcry around the world and crushed what was left of Suu Kyi's legacy as a rights defender.

Reuters has said the two were imprisoned in retaliation for their expose.

The army jailed seven soldiers for the massacre in a rare response to allegations of atrocities.

Military spokesman Zaw Min Tun said it had no comment on the release except that the case was "undertaken in line with the law."

While inside, the duo missed numerous family milestones, including the birth of Wa Lone's daughter.

Their families were overjoyed with the news.

"We are very happy," Chit Su Win, who is married to Kyaw Soe Oo, told AFP. A reunion photo of both couples celebrating, smiling and holding each of their daughters was widely shared on Twitter.

During their imprisonment, the journalists were showered with numerous awards and honours in response to their work.

Wa Lone and Kyaw Soe Oo were also featured earlier on the cover of TIME magazine as part of its person of the year coverage featuring journalists targeted for their reporting.

The case against them became a byword for the war against press freedom and prompted an international campaign that attracted the support of prominent rights lawyer Amal Clooney, who said Tuesday it had been an "honor to represent" her clients.

Rights groups and legal experts say the prosecution's case was riddled with irregularities.

A whistleblowing police officer testified during their trial that his superior had ordered his team to trap the reporters in a sting -- testimony the judge chose to ignore.

The now-former officer Moe Yan Naing told AFP he was "delighted" the families were back together, and expressed interest in meeting the journalists if they wanted to.

Media advocates and rights organizations praised the release but slammed the original arrest and conviction.

"We congratulate Wa Lone and Kyaw Soe Oo on walking free from unjust imprisonment and applaud they have now been reunited with their families," said Phil Robertson, Human Rights Watch deputy Asia director, adding they should have "never been arrested" in the first place.

But the dreams of a new day for Myanmar were short-lived -- the army launched a campaign against the Rohingya in Rakhine state, which U.N. investigators have said amounted to genocide.

Myanmar has denied the charges and said it was defending itself against Rohingya militants, who attacked and killed police officers in August 2017.