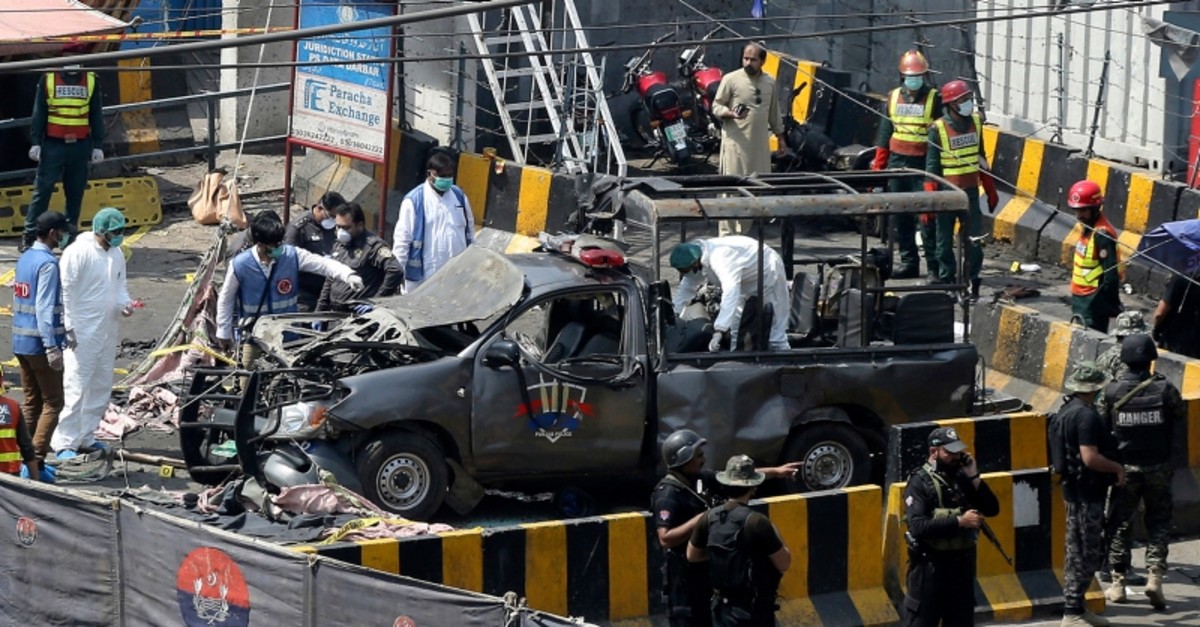 Pakistani security personnel surround a damaged police van in Lahore, Pakistan, Wednesday, May 8, 2019. (Reuters Photo)
by Compiled from Wire Services
May 08, 2019 11:42 am

Hizbul Ahrar, an offshoot of the Pakistani Taliban, claimed responsibility for the attack, saying their target was the police. Hundreds of pilgrims were inside and outside the shrine, where a local Sufi saint is buried, when the blast took place.

Sufism is a mystical strain of Islam that often involves reverence for local holy figures and shrines. Sunni extremists view Sufism with hostility and have carried out attacks on Sufi celebrations and shrines across the Muslim world. In Pakistan, militants carry out near-daily attacks targeting security forces.

Lahore police chief Ghazanfar Ali said five police and five passers-by were killed in the attack, adding that the toll could rise as some of the wounded were in critical condition.

Chaudhry Mohammad Sarwar, the governor of Punjab province, told reporters that those who carried out Wednesday's attack were the "enemy of Islam and humanity."

"God willing, the security forces with the cooperation of whole nation will defeat these terrorists," he added.

The shrine has long been home to colorful Sufi festivals and a prime destination for the country's myriad Muslim sects, making it a soft target for militant attacks.

It has been targeted previously, in a 2010 suicide attack which killed more than 40 people.

Since then the area has been increasingly hemmed in by heavy security, with visitors forced to pass through several layers of screening before they can enter the complex.

Pakistan's push against extremism was stepped up after the country's deadliest ever attack, an assault on a school in Peshawar in 2014 that left more than 150 people dead — mostly children.

Since then, security has dramatically improved but militants retain the ability to carry out dramatic attacks.

Major urban centers such as Lahore, Pakistan's second largest city and the provincial capital of its wealthiest province, Punjab, are not immune.

An attack in the city in March last year left nine people dead, while a major blast targeting Christians celebrating Easter in a park in 2016 killed more than 70 people.