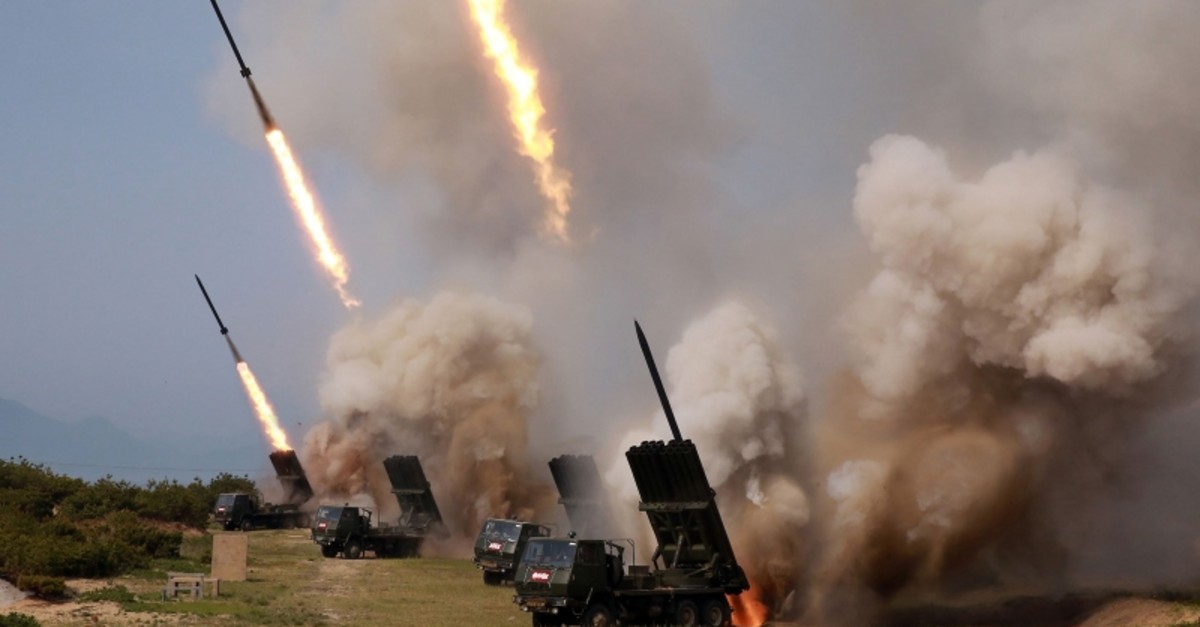 This picture taken on May 4, 2019 and released from North Korea's official Korean Central News Agency (KCNA) on May 5, 2019 shows rocket launchers firing during a test of weapons in an undisclosed location in North Korea. (AFP Photo)
by reuters
May 08, 2019 4:51 pm

Last week's "strike drill" in which North Korean leader Kim Jong Un oversaw the launch of rockets and at least one short-range ballistic missile was "regular and self-defensive," the North's foreign ministry said on Wednesday, according to state media.

"The recent drill conducted by our army is nothing more than part of the regular military training, and it has neither targeted anyone nor led to an aggravation of the situation in the region," an unidentified ministry spokesperson said in a statement to the state-run KCNA news agency.

It came in the wake of talks with the United States and South Korea stalling in February, and raised alarms in both countries, which have been seeking to entice the North into abandoning its nuclear weapons and ballistic missile programs.

Seoul responded on Saturday by calling on its northern neighbor to "stop acts that escalate military tension on the Korean Peninsula."

But U.S. President Donald Trump, who has met with Kim twice, said he was still confident he could have a deal with Kim, and South Korean officials have also played down the test.

North Korea hit back at "spiteful remarks" about the tests from unnamed critics, warning that "baseless allegations" might "produce a result of driving us to the direction which neither we nor they want to see at all."

The spokesperson said there was a double standard, with South Korea and the United States carrying out military drills with little criticism.

"Only our regular and self-defensive military drill is branded as provocative, and this is an undisguised manifestation of the attempt to press the gradual disarmament of our state and finally invade us," the spokesperson said. "We think this is very much unpleasant and regrettable, and we sound a note of warning."

After meeting with Kim for the first time in June last year, Trump abruptly announced he was canceling all large-scale military exercises with South Korea.

Smaller exercises have continued, however, drawing regular criticism from Pyongyang.

North Korea had maintained a freeze in nuclear and ballistic missiles testing in place since 2017, a fact Trump has repeatedly pointed out as an important achievement from his engagement with Pyongyang.

Denuclearization talks with North Korea have stalled, however, after Trump and Kim met in February for a second summit but failed to reach an agreement.

North Korea balked at the extent of the demands made by American negotiators, and Trump said he ended the summit early because Kim was asking for nearly all major sanctions to be lifted while offering little in return.

The U.S. special envoy for North Korea, Stephen Biegun, arrived in Seoul on Wednesday for talks with South Korean officials.

He did not respond to questions from journalists, but his agenda is expected to include the missile test, as well as other aspects of talks with North Korea, including plans for possible humanitarian aid.