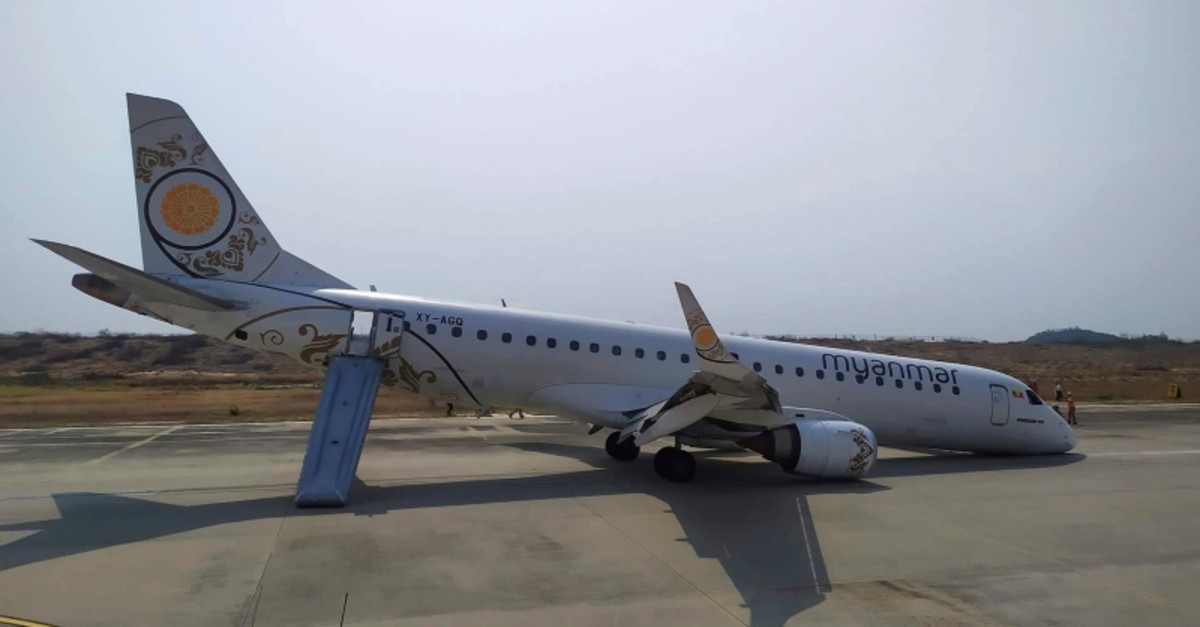 Rescue team gather near a plane of Myanmar National Airline (MNA) after an accident at Mandalay International airport Sunday, May 12, 2019, in Mandalay, Myanmar. (AP Photo)
by Compiled from Wire Services May 12, 2019 11:20 am

A Myanmar National Airlines plane has made an emergency landing at Mandalay International Airport using only its rear wheels after the front landing gear failed to deploy.

It was the second aviation incident in Myanmar this week, after a Biman Bangladesh Airlines plane skidded off the runway during strong wind in Yangon on Wednesday, injuring at least 17 of those on board.

An official praised the pilot for bringing the Embraer 190 aircraft in to land at Mandalay airport on Sunday morning despite the technical failure. No one was hurt.

"The pilot did a great job," said Win Khant, permanent secretary of transportation and telecommunication ministry, adding the incident was being investigated.

Myanmar National Airlines, the state-run carrier, said in a statement the aircraft had departed from the city of Yangon and was approaching the airport serving the central city of Mandalay when the pilot was unable to extend the front landing gear.

The pilot, Captain Myat Moe Aung, flew past the airport twice so that air traffic controllers could check if the landing gear was down, the airline said.

"Then the captain followed emergency procedures and did the fuel burn out to reduce the landing weight," it said.

Video of the landing shows the plane touching down on its rear wheels before lowering its nose. The aircraft travels some distance along the runway on its nose, kicking up smoke, before coming to a halt.

The crew then performed an emergency evacuation.

The airline did not say how many people were on board but Embraer said on its website the aircraft has a typical capacity of between 96 and 114 seats.