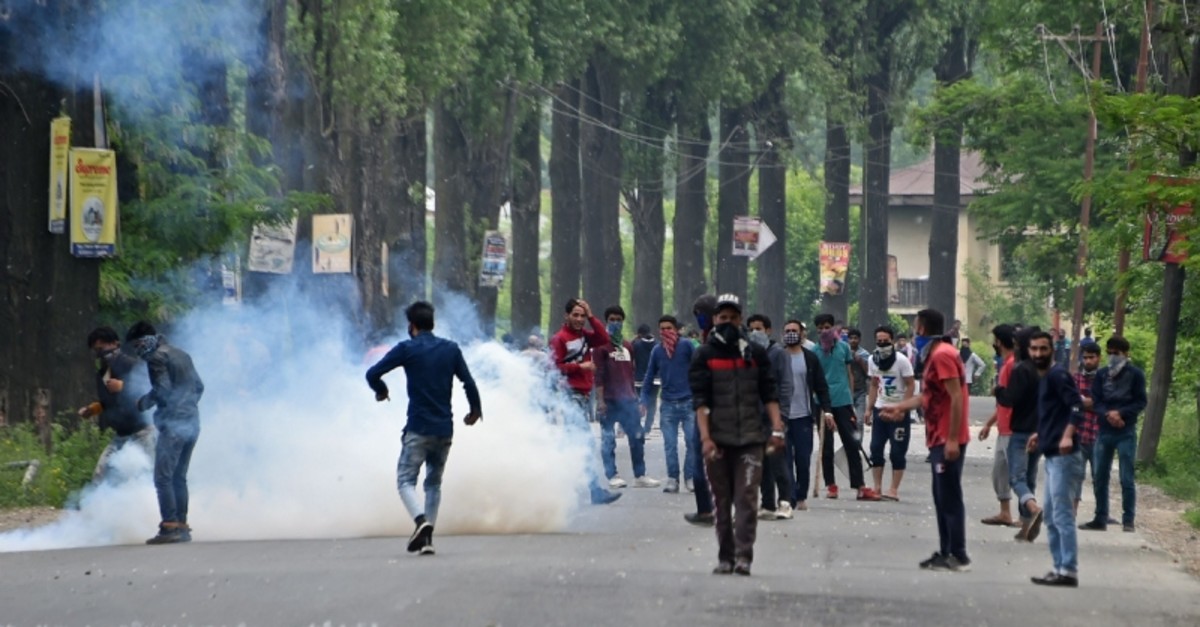 Kashmiri protestors stand on a road amid tear smoke during clashes with Indian government forces at Mirgund Pattan on the outskirts of Srinagar on May 13, 2019. (AFP Photo)
by May 13, 2019 2:05 pm

Large parts of Indian-administered Kashmir erupted in protest on Monday over the rape of a three-year-old child, leaving at least a dozen people injured in clashes with government forces, police said.

The incident happened last Wednesday when a car mechanic, a neighbor of the victim's family, allegedly lured the child into the toilet of a nearby school and sexually assaulted her.

The accused, from the Sumbal area north of the main city of Srinagar and thought to be 20 years old, has already been arrested.

On Monday, allegations emerged that the principal of another school issued a certificate for the accused that he was a minor, sparking anger and triggering protests across the Kashmir valley.

At least a dozen people including government forces personnel were injured when tear gas and pellet shotguns were fired to quell the protests in many towns, top police officer Swayam Prakash Pani told AFP.

"One of the injured protestors is critically wounded," Pani said.

"We have registered a separate case against the school principal and detained him for questioning," he said.

Thousands also protested in Srinagar and clashed with government forces.

Schools across the valley shut spontaneously as did shops and businesses.

Hundreds of students inside three university campuses also protested, demanding capital punishment for the alleged perpetrator and action against the school principal.

Lawyers abstained from work in the courts on Monday to express solidarity with the victim.

Condemnations of the crime poured in from leaders from across the political spectrum appealing for calm, with a top separatist leader, Mirwaiz Umar Farooq saying on Monday the incident was "a crime against humanity."

Another separatist leader with a wide following in Kashmir, Syed Ali Geelani, said the alleged crime was "a black stain on the social fabric" of the restive territory.

Baseer Ahmad Khan -- the region's top administrator -- also appealed for calm and said in a statement that the "inquiry of Sumbal incident is being conducted on a fast-track basis."

In January 2018, an eight-year-old girl was abducted, starved for a week and murdered after she was raped by several people in the southern Kathua area of the territory.

That incident caused widespread outrage and protests in Kashmir and many Indian cities and towns.