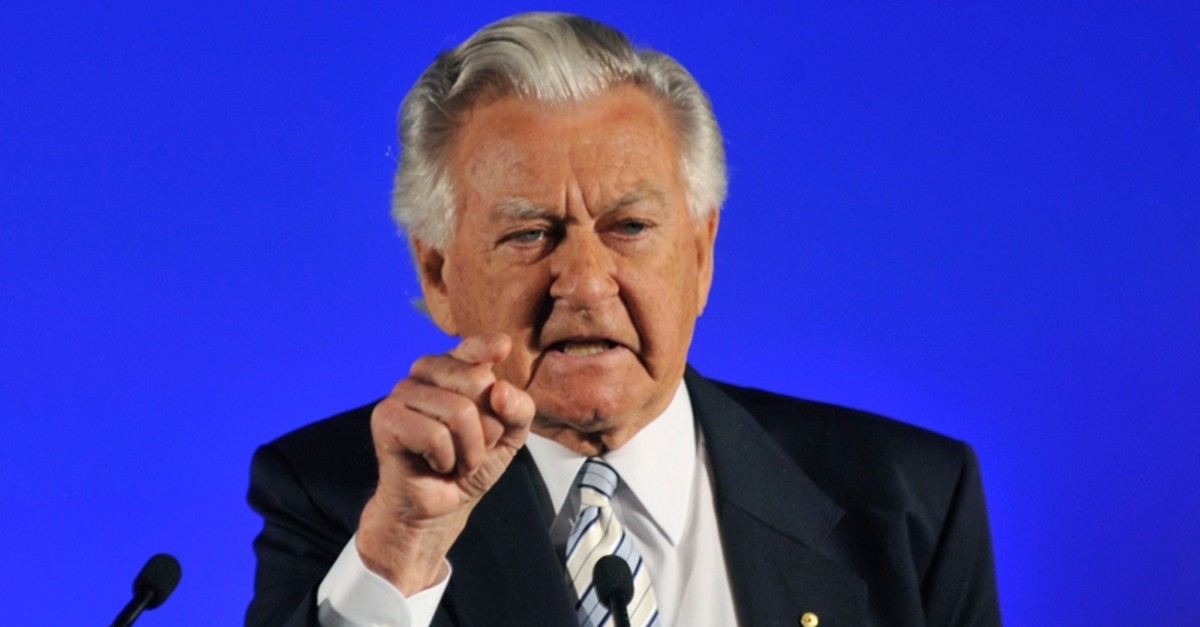 In this Aug. 16, 2010, file photo, former Prime Minister Bob Hawke speaks at the Australian Labor Party's election campaign launch in Brisbane. (Alan Porritt/Pool Photo via AP, File)
by May 17, 2019 1:39 am

Bob Hawke, a transformative and charismatic left-wing lawmaker with a "larrikin' streak who served as Australian prime minister from 1983 to 1991, died on Thursday aged 89, his family said.

"Today we lost Bob Hawke, a great Australian – many would say the greatest Australian of the post-war era," his wife and former biographer Blanche d'Alpuget said in a statement.

While others may have struggled to dismiss a reputation for boisterous, if well-meaning, behaviour, silver-haired Hawke said it helped him win favour with working-class voters.

"Bob Hawke was a great Australian who led and served our country with passion, courage, and an intellectual horsepower that made our country stronger," he said on social media.

Hawke's death comes ahead of a Saturday general election, with his opposition Labor party is narrowly ahead in the polls.

"The Australian people loved Bob Hawke because they knew Bob loved them, this was true to the very end," Labor party leader Bill Shorten said in a statement.

Hawke earned his reputation as a "larrikin", or loveable rogue, in part due to his world record for drinking a "yard", or 1.4 litres, of beer in 11 seconds while at Oxford University.

Robert James Lee Hawke, a former trade union leader, was first elected to parliament in 1980 and was named leader of the centre-left Labor Party less than a month before a snap general election in 1983.

Voters embraced Hawke and Labor won an unlikely landslide against a conservative government led by Malcolm Fraser, who had been in power for nearly a decade. Hawke became Australia's 23rd prime minister.

"I regard Bob Hawke as the best Labor prime minister this country has ever had," former conservative leader John Howard, who served as Fraser's treasurer, said this year.

Inheriting an economy languishing in recession and with double-digit unemployment and inflation, Hawke embraced economic deregulation that belied his connections with Australia's largest trade unions.

Hawke won support from the political left to float the Australian dollar, remove controls on foreign exchange and interest rates and lower tariffs on imports within months of his inauguration.

Hawke led the celebrations, famously sticking up of anyone who might over-do the revelry, declaring on television: "Any boss that sacks a worker for not turning up is a bum."

Australia also made its mark on the international stage under Hawke, who shifted diplomatic priorities away from Britain, fostering closer ties with the United States, China, Japan and Southeast Asia.

Hawke was riding high in opinion polls by the mid-1980s and won re-election in 1987 despite an economic downturn.

He won a fourth election in 1990 to become Australia's longest-serving Labor prime minister but his popularity began to wane amid a recession.

Paul Keating, Hawke's treasurer and the architect of Labor's economic policies, pressured him to step aside as his position weakened.

However, with no sign that Hawke would retire, Keating challenged him for the leadership in 1991. Hawke saw off the first challenge but eventually lost to Keating a few months later in a party-room coup.

Hawke divorced his wife of nearly 40 years, Hazel Masterson, after leaving politics and public life and married his biographer, Blanche d'Alpuget. He appeared as a media commentator and was in demand as a public speaker.