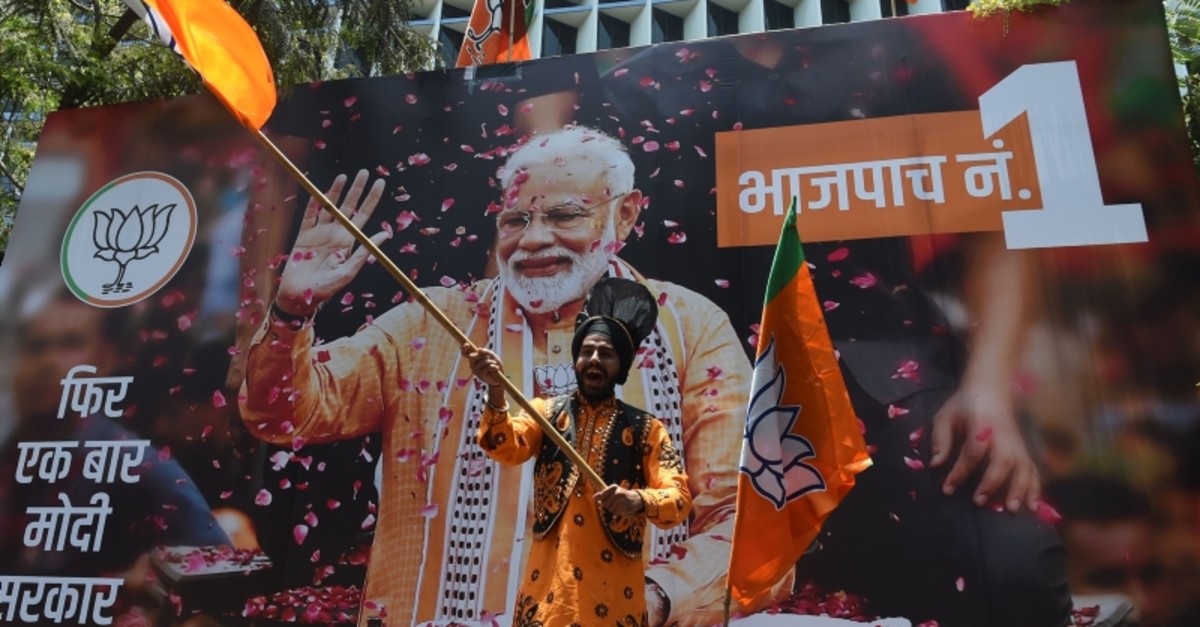 An Indian supporter of Indian Prime Minister Narendra Modi's Bharatiya Janata Party (BJP) celebrates the election results outside the BJP headquarters in Mumbai on May 23, 2019. (AFP Photo)
by Compiled from Wire Services May 23, 2019 12:24 pm

Indian Prime Minister Narendra Modi and his party had a commanding lead as votes were counted Thursday after a six-week general election, sending the stock market soaring in anticipation of another five-year term for the Hindu nationalist leader.

After four hours of counting the 600 million votes cast, Election Commission data showed Modi's Bharatiya Janata Party (BJP) clearly in the lead in 292 seats out of 542 with main rivals Congress on just 49.

This would push the BJP over the 272 seats needed for a majority, defying some predictions and surpassing 2014 when Modi swept to power with 282 seats, the first parliamentary majority for a single party in 30 years in the country of 1.3 billion people.

The result would give the BJP and its allies, on course for close to 50 seats, a commanding 340 seats in the lower house. They will still lack a majority in the upper house, however, putting a brake on Modi's legislative agenda.

As small BJP celebrations began in some places, Indian stocks rose, with the main stock indices, the Sensex and the Nifty gaining more than two percent to break the 40,000 and 12,000 point marks respectively for the first time.

"Time for transformation of India. Time for deep reform. I dream of us as a global superpower in my lifetime," tweeted India's richest banker, Uday Kotak, as he congratulated Modi.

Rahul Gandhi of the Congress party, the great-grandson, grandson and son of three past premiers, had on Wednesday dismissed exit polls pointing to a Modi win.

"Don't get disappointed by the propaganda of fake exit polls," Gandhi, 48, told the party faithful on Twitter.

Early trends also suggested that Gandhi was in a tight race against a former Bollywood actress running for the BJP in his constituency, which has been held by his family for generations. A second seat he was contesting in Kerala looked safer.

Modi, by contrast, looked set to romp home in Varanasi — one of India's holiest cities, where Hindus are cremated on the banks of the Ganges — with almost two-thirds of the votes.

The vast size of India — stretching from the Himalayas to the tropics, taking in polluted megacities, deserts and jungles — made the election a marathon six-week endeavor.

The campaign, thought to have cost more than $7 billion, was awash with insults — Modi was likened to Hitler and a "gutter insect" — as well as fake news in Facebook and WhatsApp's biggest markets.

Gandhi, 48, tried several lines of attack against Modi, in particular over alleged corruption in a French defence deal and over the desperate plight of farmers and the lackluster economy.

Unemployment is reported to be at a four-decade high with Asia's third-biggest economy growing too slowly to create jobs for the million Indians entering the labor market every month.

Modi, a former cadre in the militaristic hardline Hindu group Rashtriya Swayamsevak Sangh (RSS) and chief minister of Gujurat in 2002 when riots killed more than 1,000 people, most of them Muslims, is also seen as divisive.

Lynchings of Muslims and low-caste Dalits for eating beef and slaughtering and trading in cattle have risen, adding to anxiety among India's 170-million-strong Muslim population.

Under Modi several cities with names rooted in India's Islamic Mughal past have been re-named, while some school textbooks have been changed to downplay Muslims' contributions to India.

"If Modi again comes to power we are doomed," Hassan Khalid Azmi, a retired chemistry professor and Muslim in the northern city of Azamgarh, told AFP earlier this month.

But Modi, 68, managed deftly to turn the election into a referendum on his rule while depicting himself, often in the third person, as the only one able to defend India.

In this he was given a major boost when a suicide bombing, claimed by a Pakistan-based militant group, killed 40 Indian paratroopers in Indian-administered Kashmir on February 14.

Doubts abound about the efficacy of India's subsequent air strikes on Pakistan, but the action enabled Modi to style himself the "chowkidar" ("watchman").

"Wherever the terror groups and perpetrators may hide, our security forces will flush them out and punish them," he thundered. "Every drop of blood of our slain soldiers shall be avenged."