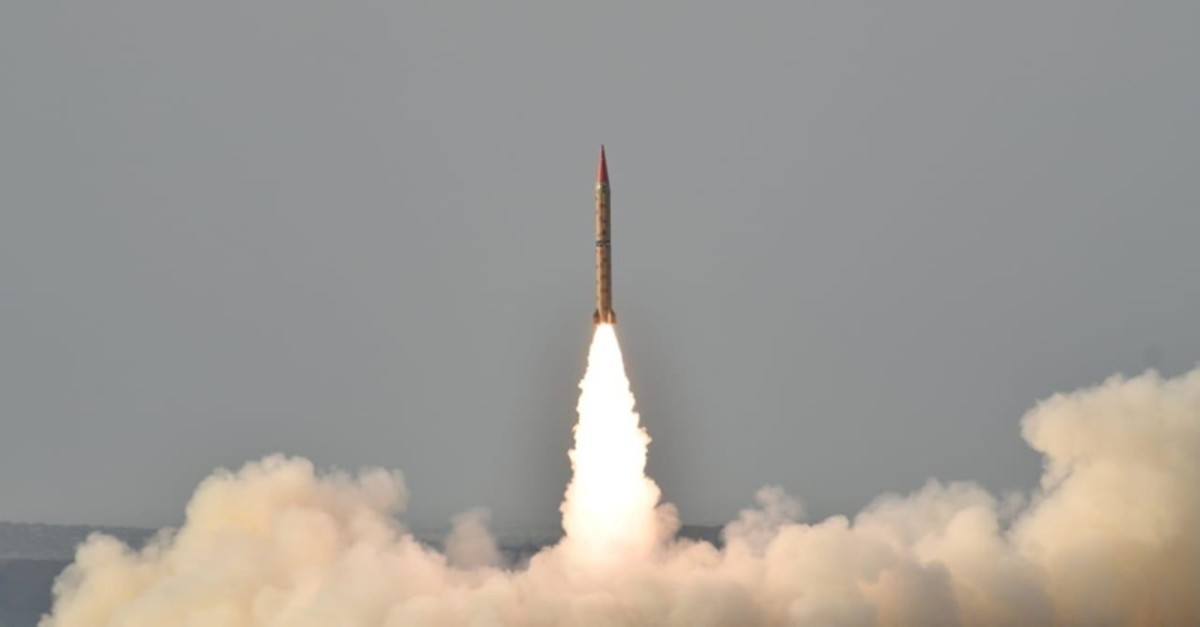 This handout released by Inter Services Public Relations on May 23, 2019 shows Shaheen II, surface-to-surface ballistic missile capable of delivering conventional and nuclear weapons at a range of up to 1,500 miles, during a launch (ISPR via Reuters)
by Compiled from Wire Services May 23, 2019 3:10 pm

Pakistan on Thursday conducted "successful" training launch of surface-to-surface ballistic missile Shaheen-II, which is capable of carrying both conventional and nuclear warheads up to a range of 1,500 kilometers (932 miles), the military said.

The training launch having its impact point in the Arabian Sea, was aimed at ensuring operational readiness of the army strategic forces command, Pakistan Army said in a statement.

"Shaheen-II is a highly capable missile which fully meets Pakistan's strategic needs towards maintenance of desired deterrence stability in the region," the statement added.

President, Dr Arif Alvi, Prime Minister, Imran Khan, and the three Services Chiefs have congratulated the scientists and engineers on successful conduct of the training launch, it added.

The announcement comes after a six-week general election in neighboring India, where counting shows Prime Minister Narendra Modi and his party have a commanding lead, making another five-year term for the Hindu nationalist leader very likely.

The latest missile test follows heightened tensions between the arch rivals, which are locked in a string of sea and land disputes and have fought three wars and a three-week long skirmish since 1947.

Pakistan and India are among a small handful of countries with nuclear arsenals. India joined the nuclear club long before Pakistan, in 1974, prompting Islamabad to follow suit.

Pakistan silently developed its own nuclear capability in the 1980s, when it was an ally of the U.S. in the first Afghan war against the crumbling Soviet Union.

It did not conduct any nuclear tests until India carried out a series of its own tests in 1999. Only three weeks later, Pakistan conducted six successful tests in the remote Chaghi district near the Afghanistan-Iran border, stoking fears of a nuclear war between the longtime rivals.

According to Stockholm International Peace Research Institute, India currently possesses between 80 and 100 nuclear warheads, while Pakistan holds between 90 and 110.

Pakistan has signaled a willingness to open peace talks with India and on Wednesday, Pakistani Foreign Minister Shah Mahmud Qureshi spoke briefly with his Indian counterpart at the sidelines of a meeting of the Shanghai Cooperation Organization member states in the Kyrgyz capital, Bishkek.

"We never speak bitterly, we want to live like good neighbors and settle our outstanding issues through talks," he said following the meeting.

The remark follows months of tension between the long-time rivals, which came close to war in February over the disputed region of Kashmir, which both sides have claimed since independence from Britain in 1947.

Following a suicide attack in Kashmir that killed 40 members of an Indian paramilitary police force in February, Indian jets launched a raid inside Pakistan, striking what New Delhi said was a training camp of Jaish-e Mohammed, the radical group that claimed the Kashmir attack.

In response, Pakistan conducted a retaliatory strike of its own and jets from the two countries fought a dogfight in the skies over Kashmir during which an Indian pilot was shot down and captured.

Amid international pressure to end the conflict, Pakistan returned the pilot and there were no further strikes but tensions remained high, with regular exchanges of artillery fire from both sides in Kashmir.

Pakistan has also kept part of its airspace closed to international air traffic, disrupting flights to India and other parts of the region.

Prime Minister Imran Khan has repeatedly offered to start talks with India to resolve the Kashmir issue, and officials have said that they hoped the process could start once the election is concluded.