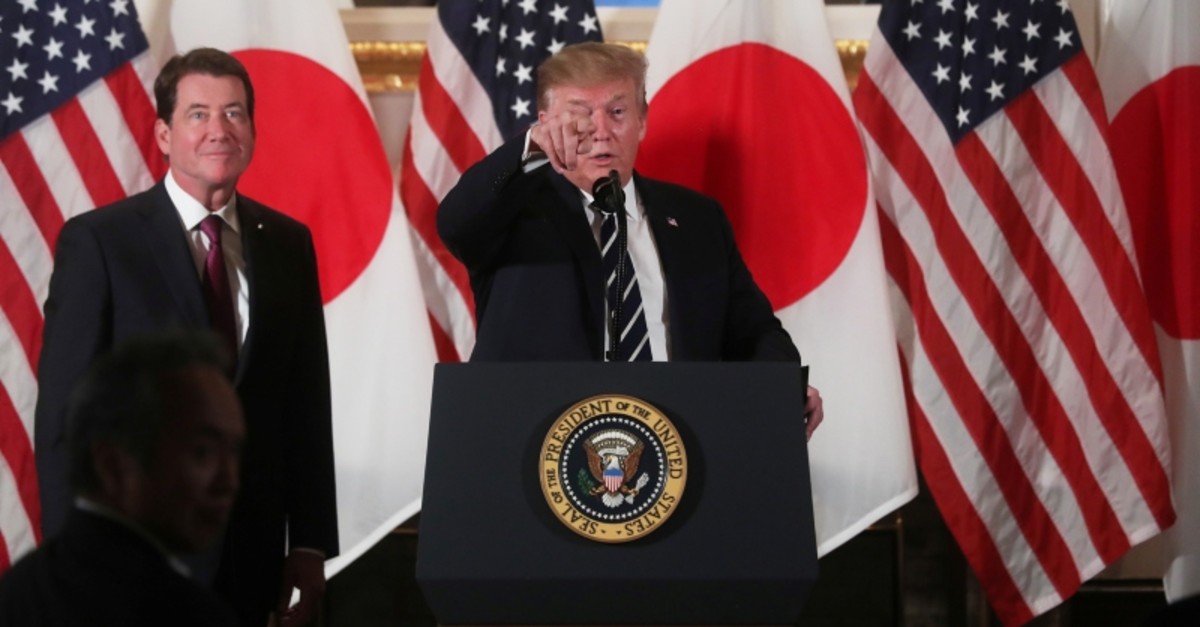 President Donald Trump Saturday vowed to make the U.S. trade relationship with Japan a "little bit more fair", as he kicked off a four-day visit to Tokyo aimed at cementing ties between the two close allies.

Trump's four-day trip is expected to feature plenty of warm words and images as he plays golf and watches sumo with his "friend" Shinzo Abe, Japan's prime minister.

But the world's top and third-biggest economies are also thrashing out a trade deal and Trump wasted no time in lashing out at what he sees as an imbalance between the pair.

Shortly after arriving at the airport to a red-carpet welcome, Trump attended a reception at the residence of U.S. Ambassador William Hagerty that the White House said included top Japanese business executives from Toyota, Nissan, Honda, SoftBank and Rakuten.

Trump told the company officials there had never been a better time to invest in the United States and repeated a complaint that the Federal Reserve's policies had kept U.S. economic growth from reaching its full potential.

With trade talks ongoing, Trump also got in a dig at Japan and said he wanted a deal to address the trade imbalance between the two countries and ensure fairness and reciprocity.

"Japan has had a substantial edge for many, many years, but that's OK, maybe that's why you like us so much," he said.

After a bilateral trade deal has been signed, it will be "a little bit more fair," vowed the president.

"With this deal we hope to address the trade imbalance, remove the barriers to United States exports and ensure fairness and reciprocity in our relationship. We're getting close," said Trump.

He added: "We hope to have several further announcements soon and some very big ones over the next few months."

Some observers suspect Abe is rolling out the red carpet to present Japan as the most favorable of the countries currently engaged in trade disputes with Washington but little concrete progress is expected with elections looming for the Japanese PM.

Japanese and U.S. officials hail as "unprecedented" the relationship between Trump and his "golf buddy" Abe, and the pair are scheduled to again find time for a round to burnish their diplomatic bromance.

Just over an hour before Trump arrived, a 5.1-magnitude earthquake rattled buildings in Tokyo, with the epicenter very close to where the leaders are due to tee off.

In the evening, the Tokyo Sky Tree tower was lit up red, white and blue in Trump's honor.

The official centerpiece of the trip is Trump's meeting on Monday with Japan's new Emperor Naruhito, who only ascended the Chrysanthemum Throne at the beginning of the month following his father's historic abdication for health reasons.

"With all the countries of the world, I'm the guest of honor at the biggest event that they've had in over 200 years," said Trump before his departure.

But the visual highlight is more likely to be Trump's visit on Sunday to the final day of the summer "basho" or sumo tournament where he is expected to present the trophy to the winner.

Japanese wrestler Asanoyama will receive the "president's cup" -- weighing 60-70 pounds (27-32 kilos) and measuring 54 inches (1.4 meters) -- after his win as Trump was arriving on Saturday gave him a 12-2 record and put him out of reach on the final day.

Trump's appearance at the hallowed sumo hall has presented a logistical, security and protocol nightmare, ranging from where he sits to how he should be protected if the crowd start throwing chair pillows -- as tradition dictates when a Grand Champion (yokozuna) falls.

The leaders will play golf before going to the sumo and then repair with their wives to a restaurant in Tokyo's Roppongi entertainment district, where the menu features skewers of prime sirloin beef at 5,184 yen ($47) for two.

Abe made a strategic decision before Trump was elected to focus on Japan's relationship with the U.S. The courtship began when Abe rushed to New York two weeks after the November 2016 election to meet the president-elect at Trump Tower. Last month, Abe and his wife, Akie, celebrated first lady Melania Trump's birthday over a couples' dinner at the White House.

Abe has just recently returned from Washington and Trump himself will be coming back to Japan in just over a month for the Group of 20 leaders' summit in the western city of Osaka.

Behind the smiles and personal friendship, however, lurks deep uneasiness over Trump's threat to impose tariffs on Japanese autos and auto parts on national security grounds, a move that would be far more devastating to the Japanese economy than earlier tariffs on steel and aluminum.

"This is an exciting time for commerce between the two countries that we both love."

The formal diplomatic part of the trip is limited to a short bilateral meeting and a working lunch on Monday, after which the two leaders will brief the media.

They are also poised to meet families of people abducted by North Korea during the Cold War era to train Pyongyang's spies, an emotive issue in Japan that Abe has pressed Trump to raise in talks with the North's leader Kim Jong Un.

Trump will also address troops at a U.S. base in Japan, highlighting the military alliance between the two allies at a time when tensions are running higher with North Korea after the failure of the Hanoi summit in February.

U.S. Trade Representative Robert Lighthizer held talks with his Japanese counterpart on the sidelines of the visit but with Abe facing upper house elections in the coming months and Trump battling China, both are likely to avoid concessions.

The United States is in the middle of an expensive trade war with China in protest against Beijing's treatment of U.S. companies, and tensions with Japan and the European Union over trade are simmering.

Trump and Abe are expected to address trade during more formal talks on Monday, but officials have played down the possibility of a deal during the visit. North Korea's nuclear and missile programs are also likely to be on the agenda.