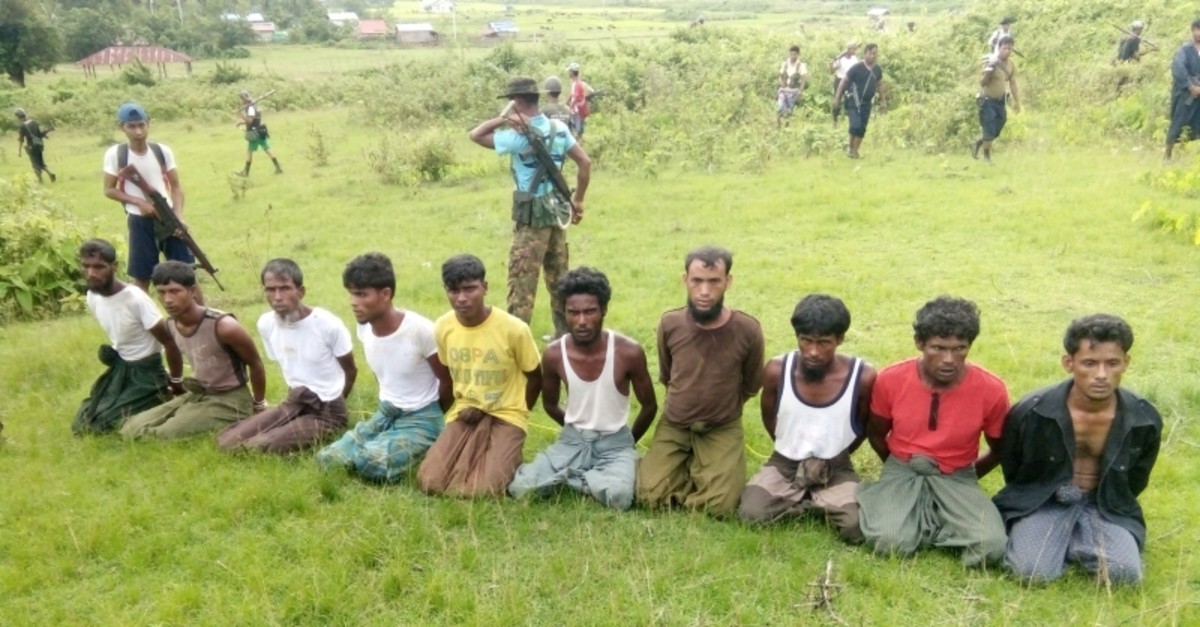 Myanmar has granted early release to seven soldiers jailed for the killing of 10 Rohingya Muslim men and boys during a 2017 military crackdown in the western state of Rakhine, two prison officials, two former fellow inmates and one of the soldiers told Reuters.

The soldiers were freed in November last year, the two inmates said, meaning they served less than one year of their 10-year prison terms for the killings at Inn Din village.

They also served less jail time than two Reuters reporters who uncovered the killings. The journalists, Wa Lone and Kyaw Soe Oo, spent more than 16 months behind bars on charges of obtaining state secrets. The two were released in an amnesty on May 6.

Win Naing, the chief warden at Rakhine's Sittwe Prison, and a senior prison official in the capital, Naypyitaw, confirmed that the convicted soldiers had not been in prison for some months.

"Their punishment was reduced by the military," said the senior Naypyitaw official, who declined to be named.

Both prison officials declined to provide further details and said they did not know the exact date of the release, which was not announced publicly.

The seven soldiers were the only security personnel the military has said it has punished over the 2017 operation in Rakhine, which drove more than 730,000 Rohingya Muslims to flee to Bangladesh. U.N. investigators said the crackdown was executed with "genocidal intent" and included mass killings, gang rapes and widespread arson.

Myanmar denies widespread wrongdoing and officials have pointed to the jailing of the seven soldiers in the Inn Din case as evidence Myanmar security forces do not enjoy impunity.

"I would say that we took action against every case we could investigate," the military's commander in chief, Senior General Min Aung Hlaing, told officials from the U.N. Security Council in April last year, according to an account posted on his personal website.

The army chief cited the Inn Din case specifically. "The latest crime we punished was a killing, and ten years' imprisonment was given to seven perpetrators," he said. "We will not forgive anyone if they commit (a) crime."

Reached by phone on Thursday, a man named Zin Paing Soe confirmed that he was one of the seven soldiers and that he was now free, but declined to comment further. "We were told to shut up," he said.

The 2017 campaign was launched across hundreds of villages in northern Rakhine in response to attacks by Rohingya insurgents. Reuters exposed the killings in a report published in February 2018.

Troops from the 33rd Light Infantry Division, a mobile force known for its brutal counter-insurgency campaigns, worked with members of a paramilitary police force and Buddhist vigilantes to drive out the entire Muslim population of Inn Din, burning and looting Rohingya homes and property, according to Buddhist and Muslim villagers and members of the security forces.

On Sept. 1, 2017, soldiers and some villagers detained a group of 10 Rohingya. The military said the men were "terrorists"; their family members said they were farmers, high school students and an Islamic teacher.

The next morning, witnesses said, Buddhist villagers hacked some of the Rohingya men with swords. The rest were shot by Myanmar troops and buried in a shallow grave.

The two Reuters reporters, Wa Lone, 33, and Kyaw Soe Oo, 29, discovered the grave and obtained pictures of the 10 men before and after they were killed. The journalists were arrested in December 2017 while investigating the killings and later sentenced to seven years in prison under the Official Secrets Act.

Defence lawyers argued their arrest and prosecution were aimed at blocking their reporting, and one police officer testified that a senior police official had ordered that the reporters be set up and arrested.

In April 2018, after launching an investigation into the killings, the military announced that four officers and three soldiers of other ranks had been dismissed from the military and sentenced to 10 years with hard labour for "contributing and participating in murder". Neither their names nor details of their roles in the killing were disclosed.

Civilian leader Aung San Suu Kyi welcomed the convictions, telling reporters at the time the sentencing was Myanmar's "first step on the road of taking responsibility".

Suu Kyi's spokesman, Zaw Htay, did not pick up a call seeking comment on the release of the seven soldiers.

'YEAR THAT CHANGED MY LIFE'

Two men who recently spent time in Sittwe Prison told Reuters the seven soldiers were well-known among prisoners there.

"We were in the same building but different cells," said one of the men, Aung Than Wai, a political activist from Sittwe, who spent nearly six months in prison under a privacy law after he criticized a state official and posted an image of the official online.

Aung Than Wai, who was released from Sittwe in December, said he wanted to speak publicly about the soldiers' early release because an ethnic Rakhine Buddhist villager also jailed over the Inn Din killings was still in prison. The villager, school teacher Tun Aye, is serving a five-year sentence for murder at Buthidaung Prison in northern Rakhine, said his lawyer, Khin Win.

The convicted soldiers in Sittwe were given beer and cigarettes even though such indulgences were off-limits to other prisoners, Aung Than Wai said.

The soldiers were also visited by army officials, said the second man who was in the prison at the time and asked not to be named. In November, the seven men were taken away in a military vehicle, he said.

The same month, Zin Paing Soe, one of the convicted soldiers, set up a new Facebook account, noting in his biography that he attended the military's elite Defense Services Academy.

In one of the account's first public posts, he said he was looking forward to the end of a year spent mostly in prison.

"When will these unfortunate things end for me?" the post reads. "The year that totally changed my life: Fuck 2018."