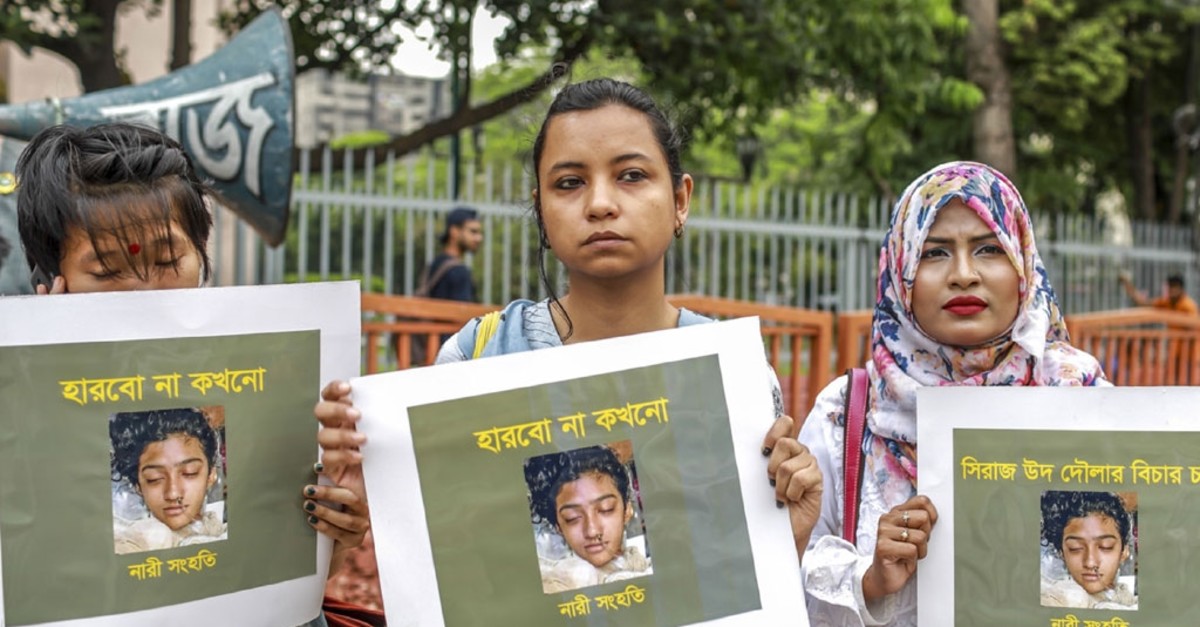 In this photo taken on April 12, 2019 Bangladeshi women hold placards and photographs of schoolgirl Nusrat Jahan Rafi at a protest in Dhaka, following her murder by being set on fire after she had reported a sexual assault. (AFP Photo)
by reuters May 28, 2019 7:30 pm

Bangladesh is to charge 16 people over the murder of a teenager burned to death last month, police said on Tuesday, in the latest case to highlight the treatment of women in the country.

Nusrat Jahan was 18 when her killers poured kerosene over her and set her on fire on the roof of her school after she refused to withdraw a sexual harassment complaint against the head teacher.

She died in hospital five days later, sparking public outrage and mass demonstrations calling for her killers to face punishment. Prime Minister Sheikh Hasina met Jahan's family to assure them the killers would not be spared.

The head of the Police Bureau of Investigation said the men and women arrested in connection with her murder would all be charged on Wednesday, with prosecutors seeking the death penalty for all 16.

"We will be submitting the charge sheet on Wednesday," Banaj Kumar Majumdar, told the Thomson Reuters Foundation.

The head of Bangladesh Mahila Parishad, a women's rights organization, said more needed to be done to ensure the safety of women in Bangladesh.

A study conducted by the group found that about 950 women were raped in Bangladesh last year.

"Justice has to be ensured," said the group's general secretary Maleka Banu. "(But) just ensuring that the Nusrat case is taken care of is not enough. We need to do a lot more to make the situation better for Bangladeshi women."