North Korea says use of strength not an American monopoly, accuses US of 'evil ambition' 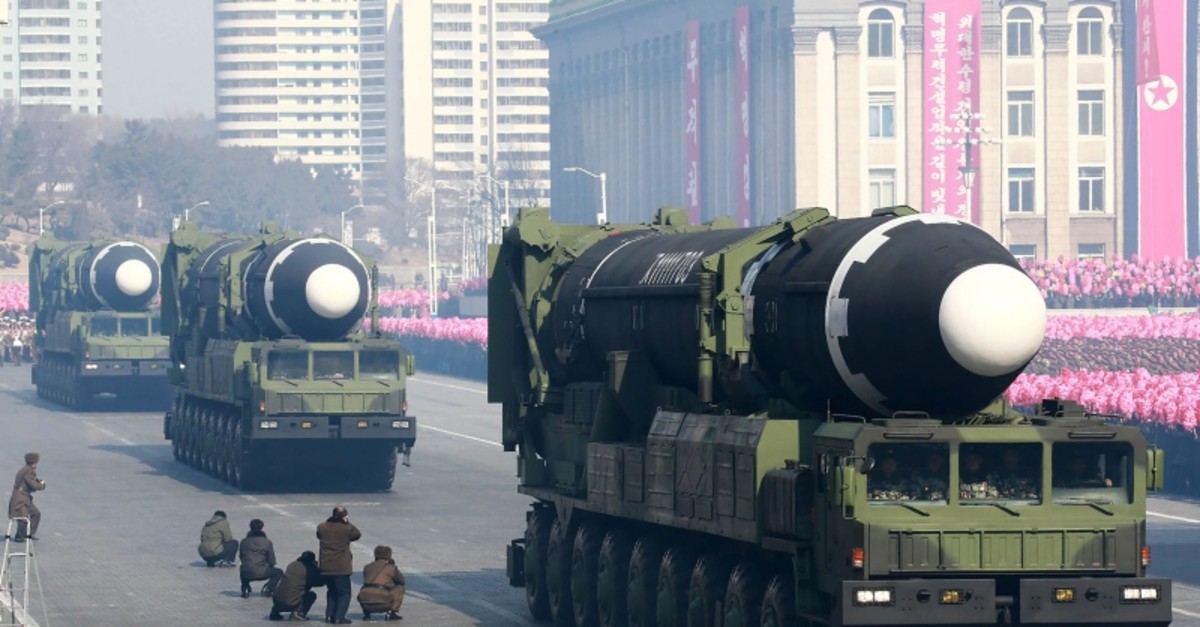 In this file photo taken on February 8, 2018 and released on February 9, 2018 by KCNA shows Hwasong-15 ballistic missiles during the military parade to mark the 70th anniversary of the Korean People's Army at Kim Il Sung Square in Pyongyang. (AFP)
by reuters
May 30, 2019 1:55 am

North Korea on Wednesday accused the United States of showing bad faith in negotiations by conducting nuclear and missile tests and military drills as part of an "evil ambition" to conquer North Korea by force, even while advocating dialogue.

In the latest uptick in angry rhetoric from Pyongyang after a failed summit with the United States in February, a North Korean Foreign Ministry statement repeated complaints about an ongoing U.S. sanctions campaign, including the seizure of one of the country's biggest cargo ships, and warned that "use of strength is not at all a monopoly of the United States."

The statement, attributed to the Policy Research Director of the ministry's Institute for American Studies and carried by official media, noted that the United States had conducted a subcritical nuclear test on Feb. 13, just days before a second summit between U.S. President Donald Trump and North Korean leader Kim Jong Un.

"The U.S. has thus showcased its ulterior intention that it seeks a strength-based solution of the issues, though outwardly it advocates for dialogue," the statement said.

It aimed fresh attacks at John Bolton, Trump's national security adviser, and Secretary of State Mike Pompeo, accusing them and other high-ranking U.S. officials of having "insulted the dignity of our supreme leadership and spitted out abusive language" by calling North Korea a "rogue regime."

It also accused the U.S. officials of a "hostile scheme to stifle us by force" by warning that Washington would "change its path" if North Korea did not give up its nuclear weapons.

It also complained of increasing reconnaissance flights over North Korea and accused Washington of "maneuvers" to deploy sophisticated landing craft in Japan and nuclear-capable submarine-launched ballistic missiles around the Korean Peninsula.

"All the above clearly shows that the June 12 ... Joint Statement is not within the consideration of the United States and there is no change at all in the American evil ambition to conquer (North Korea) by force," it said, referring to a commitment by Trump and Kim at a first summit last year to establish a new era of relations.

"The U.S. should better bear in mind that its hostile acts will only bring about the result of adding tension to the already unstable Korean Peninsula and inviting adverse current. Use of strength is not at all a monopoly of the United States," the statement said.

A spokeswoman for the U.S. State Department said Washington remained committed to the goals agreed by Trump and Kim "of transformed U.S.-North Korean relations, building lasting peace, and complete denuclearization."

"The U.S. remains ready to engage in constructive discussions," she said.

The North Korean statement comes days after Trump, who says he is keen to pursue talks with Kim even while maintaining a hardline sanctions policy, sought to play down North Korea's first missile tests since 2017 conducted earlier in May.

Trump said they had involved only short-range weapons and North Korea had stuck to a freeze in nuclear and ICBM tests. He appeared to contradict Bolton, who had said there was "no doubt" the North Korean launches had violated U.N. Security Council resolutions.