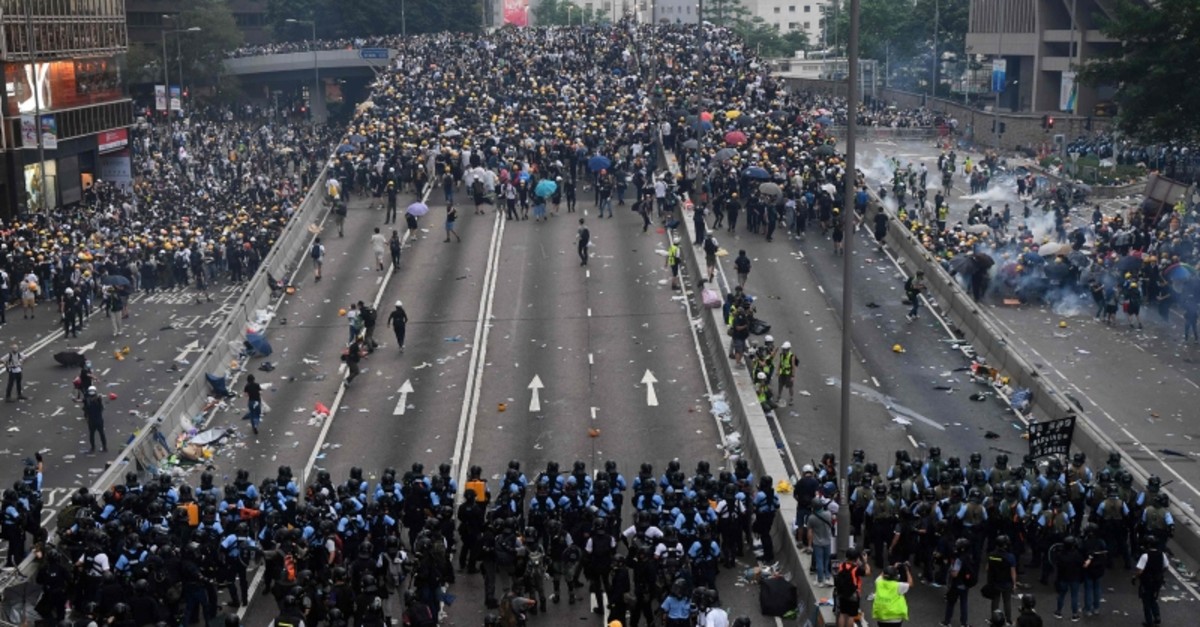 Protesters face off with police after they fired tear gas during a rally against a controversial extradition law proposal outside the government headquarters in Hong Kong on June 12, 2019. (AFP Photo)
by Compiled from Wire Services Jun 12, 2019 4:54 pm

Hong Kong was rocked Wednesday by the worst political unrest since its handover to China as police fired tear gas and rubber bullets to disperse protesters who tried to storm parliament and blocked roads in the financial hub, forcing the Legislative Council to postpone the debate on the controversial extradition bill.

The violent protests were the latest expression of widespread public anger over the government's controversial Beijing-backed plan to allow extraditions to China. Clashes broke out hours after tens of thousands of people seized key arteries in the morning rush hour and surrounded the city's parliament.

Hong Kong Chief Executive Carrie Lam, who is championing the law's passage, described the protests as "organized riots" and called for calm to be restored.

"The rioting actions that damage peaceful society, ignoring law and discipline is unacceptable for any civilized societies," she said in a video statement.

Lam spoke tearfully about the sacrifices she has made for the city in response to questions about whether she is "selling out" the territory by trying to push through a controversial extradition bill. Speaking about her commitment to her job, her voice cracked as she said: "They said I'm selling out Hong Kong. How could I do that? I grew up here with everyone else in the city."

But in an interview with news channel TVB on Wednesday, Lam dodged questions about whether she would withdraw the bill.

"It's time to let lawmakers with different opinions express their views under the legislative process," Lam said. "On whether to retract or push it through ... our consideration is this. There is no doubt this issue is controversial. Explanation and dialogue are useful but perhaps that has not entirely dispelled worries."

Lam added that she has never "felt guilty" over the issue and insisted she believed she was doing the right thing. She said she felt "worried and sad" about young protesters — many of them teenagers — on the streets, but said that as a parent to two sons, she believed it would be wrong to cave into young people's "willful behavior."

The scenes echoed the pro-democracy "Umbrella Movement" of 2014 where protesters calling for greater democratic rights shut down swathes of the city for two months and battled police, but won no concessions from Beijing.

This time police appeared determined not to let protesters hold any ground while the young demonstrators responded in kind, hurling projectiles including metal poles, bottles and bricks.

Tear gas sent the crowds scattering, but riot police continued to fight cat and mouse battles with their opponents into the evening, bringing the center of the international finance hub to a standstill.

Dressed in black T-shirts and jeans, many protesters appeared undaunted by demands to disperse from police. The demonstrators also appeared mindful of Beijing's growing use of electronic surveillance such as facial recognition technology to build dossiers on those it considers politically unreliable, with many donning surgical masks to hide their features, as well as to safeguard against tear gas.

Such protests are never tolerated in mainland China, and Hong Kong residents can face travel bans and other repercussions if they cross the border.

Authorities said 22 people were injured, with wounded police and protesters seen being carried away.

Hong Kong has been convulsed by political unrest in recent years as fears surge that Beijing is trying to stamp on the city's unique freedoms and culture.

But Wednesday's violence was an unprecedented escalation of the conflict.

"In terms of the level of violence, today has been the most serious since the 1997 handover," political analyst Dixon Sing told AFP, citing the sustained used of tear gas, rubber bullets and bean bag rounds, as well as the willingness of protesters to take on the police.

"Today's events reflect a huge gap in the confidence Hong Kong people have towards the government. They increasingly believe the Hong Kong government are a bunch of puppets serving the interests of Beijing," he added.

The proposed law would allow Hong Kong to send suspects to other jurisdictions around the world -- including China.

Hong Kong's leaders say it is needed to plug loopholes and to stop the city being a sanctuary for fugitives. They say safeguards are in place to ensure that political critics of Beijing will not be targeted.

But it is deeply unpopular, with fears people will become entangled in the mainland's opaque courts, leaving them vulnerable to a justice system seen as acting at the behest of the Chinese Communist Party.

Opposition to the bill has united an unusually wide cross-section of the city in recent weeks, from influential businessmen and lawyers, to religious groups, student unions and workers.

On Sunday record crowds of around one million marched against the law. That rally, however, failed to move pro-Beijing Lam, who has rejected calls to withdraw the bill and vowed to fast track it through the legislature.

"These violent protesters kept charging at our line of defense, and used very dangerous weapons, including... throwing metal barricades at us and throwing bricks," he said.

He also described the demonstrations as a riot and that could mean long jail terms for anyone arrested, adding to concerns that Hong Kong's government is using public disturbance laws to intimidate political protesters.

"We condemn such irresponsible behavior," Lo said. "There's no need to hurt innocent people to express your opinions," he said, adding that people should not "do anything they will regret for the rest of their lives."

Hong Kong's stock market sank nearly 1.8 percent on Wednesday in the city-wide turmoil while the parliament canceled the scheduled debate. But authorities are determined to have the law on the books as soon as possible.

Protesters have vowed to keep hitting the streets until the bill is shelved.

"The only responsible thing to do now is for Carrie Lam to withdraw the evil bill, or at least to shelve it in order to solve the crisis," said pro-democracy lawmaker Fernando Cheung.

"It's the government who has forced people to escalate their actions, so I think it's inevitable for the fight this time to get heated," added 21-year-old protester Lau Ka-chun.

Many western nations have criticized the bill, while Beijing has voiced support. At regular briefing Wednesday, China's Foreign Ministry repeated its support for the bill. Ministry spokesman Geng Shuang also denied Beijing has been interfering in the city's affairs in a way that violates agreements made when Hong Kong was handed back to China.

"Hong Kong people's rights and freedoms have been fully guaranteed in accordance with law," he said.

The protests are widely seen as reflecting growing apprehension about relations with the Communist Party-ruled mainland, where Xi has said he has zero tolerance for those demanding greater self-rule for Hong Kong.

Britain urged the Hong Kong government to "pause and reflect" on an extradition bill that has sparked widespread protests, and said the former British colony must take steps to protect its rights, freedoms and high degree of autonomy.

"I urge the Hong Kong government to listen to the concerns of its people and its friends in the international community and to pause and reflect on these controversial measures," Foreign Secretary Jeremy Hunt said.

"It is essential that the authorities engage in meaningful dialogue and take steps to preserve Hong Kong's rights and freedoms and high degree of autonomy, which underpin its international reputation."

Under its "one country, two systems" framework, Hong Kong was supposed to be guaranteed the right to retain its own social, legal and political systems for 50 years following its handover from British rule in 1997. However, China's ruling Communist Party has been seen as increasingly reneging on that agreement by forcing through unpopular legal changes. Critics say this has worsened since President Xi Jinping's ushered in an era of a more authoritarian rule on the mainland.

Meanwhile, the Hong Kong Tourism Board said it has canceled a Dragon Boat Carnival planned for the nearby Central Harbourfront on Friday through Sunday.

It said the decision was made after "careful consideration" of the situation in the area.