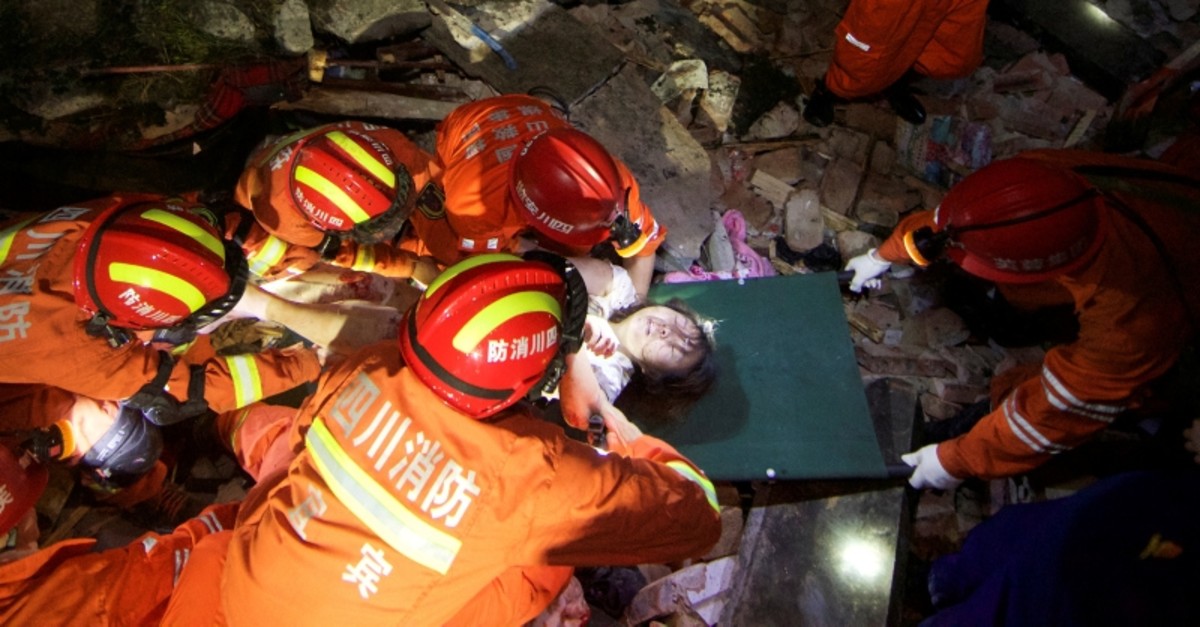 Rescue workers place a woman on a stretcher as they search for survivors in the rubble after earthquakes hit Changning county in Yibin, Sichuan province, China June 18, 2019. (Reuters Photo)
by Compiled from Wire Services Jun 17, 2019 6:55 pm

The toll from a strong 6.0-magnitude earthquake in southwest China rose to 12 dead and 134 injured on Tuesday as rescuers pulled bodies and survivors from wrecked buildings.

More than 4,000 people were relocated as dozens of structures were damaged or collapsed following late Monday's earthquake outside Yibin in Sichuan province, according to the city government.

The Yibin city press office said on its social media account that 73 houses had collapsed.

State broadcaster CCTV showed footage of rescuers bringing a survivor out of the rubble of a building on a stretcher overnight. Other images showed a woman being helped out of another collapsed structure.

Images from Changning County showed an electricity pole knocked down on the roof of a building, a hole in a brick home and broken windows on the street.

Cracks appeared in several highways and a major highway connecting Yibin and Xuyong County was closed, according to the official Xinhua news agency.

Xinhua reported overnight that a hotel close to the epicenter collapsed, but there was no immediate word of any casualties.

An early warning alarm system was triggered in the provincial capital Chengdu about one minute before the earthquake struck, Xinhua said. The alert rang 10 seconds before it hit Yibin.

A three-second headstart before an earthquake strikes can prevent 14% of casualties, Xinhua said.

Nine people died in Changning County and three others in Qixian County, the Yibin city government said in its Twitter-like Weibo account, up from an initial death toll of six overnight.

Xinhua said more than 50 people were being treated in two hospitals.

More than 500 firefighters have been dispatched to the scene. Rescue personnel were also sent with 5,000 tents, 10,000 folding cots and other emergency supplies, Xinhua reported.

The area was hit by a series of at least four aftershocks, the largest of which had a magnitude of 5.1.

The US Geological Survey put the magnitude of the main quake at 5.8.

In February, three earthquakes hit Rongxian county in the province, killing two people and injuring 12 others -- casualties that residents blamed on fracking.