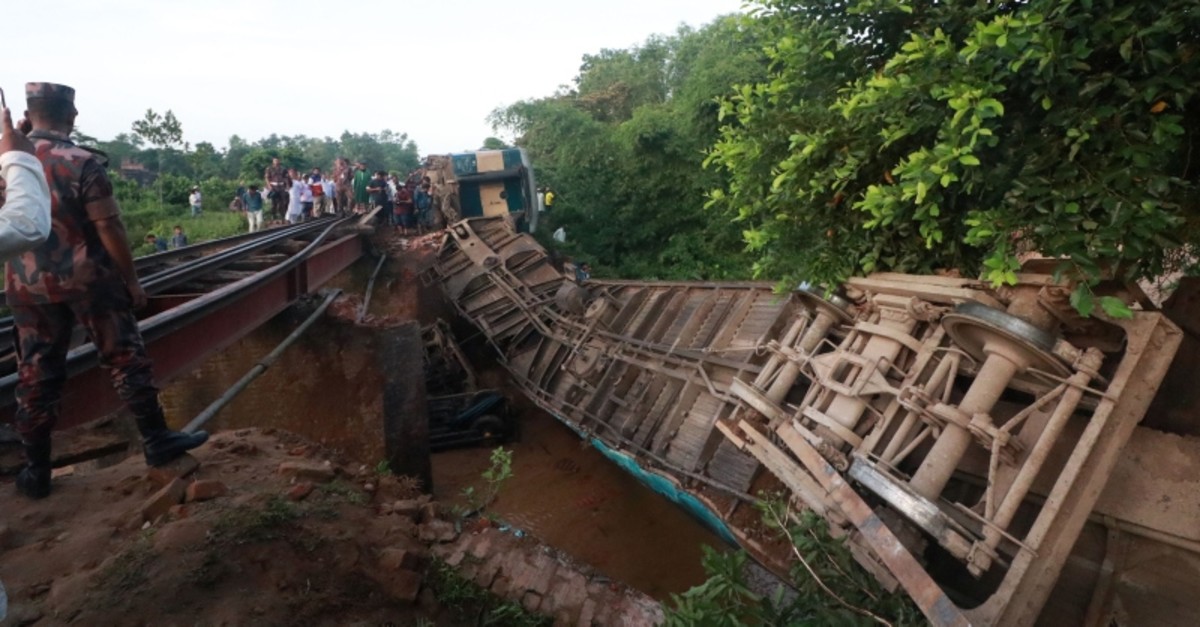 Bangladeshi onlookers gather around a derailed train after a bridge collapse in Kulaura on June 24, 2019. (Photo by STR / AFP)
by Compiled from Wire Services Jun 24, 2019 2:00 pm

Five coaches on a Bangladesh express train veered off a railway bridge in northeastern Bangladesh, killing at least four people and injuring 65, officials said Monday, and a search of the wreckage for any people trapped was continuing.

Local chief government administrator Tofayel Ahmed told the AP the Upaban Express train was heading for the capital, Dhaka, when the crash occurred around midnight at Kulaura in Moulvibazar district on Sunday.

He said the rail bridge broke down when the train was crossing it. The cause of the breakdown wasn't known immediately.

The collapse sent five cars crashing to the ground, with one of them landing in the water.

Ahmed said at least 15 passengers were in critical condition. The bodies of three women and a child were kept in a local health complex, he said. Local TV stations said more than 100 people were injured. The injured were transferred to Sylhet, the nearest city.

Scores of people were trapped in the accident at Kalaura, 300 kilometers (185 miles) from Dhaka.

Meanwhile, citing local health and family planning official Dr. Nurul Haque, the Jugantor newspaper reported death toll as seven and the number of the wounded as 250.

Local people joined fire and police teams in pulling the dead and injured out of the wreckage, Rashidul Hasan, a police superintendent, told AFP.

Another official Mesbah Uddin Ahmed said engineers and workers were working to retrieve the coaches while the search for any people trapped under the wreckage was continuing.

Railway communication between Sylhet and rest of the country were disrupted following the accident, Railway Ministry Secretary Mozammel Hossain said.

The government formed a panel of experts to investigate the accident due to report back in three days, Hossain added.

Train accidents are common in Bangladesh because of poor signaling and rundown tracks.
RELATED TOPICS