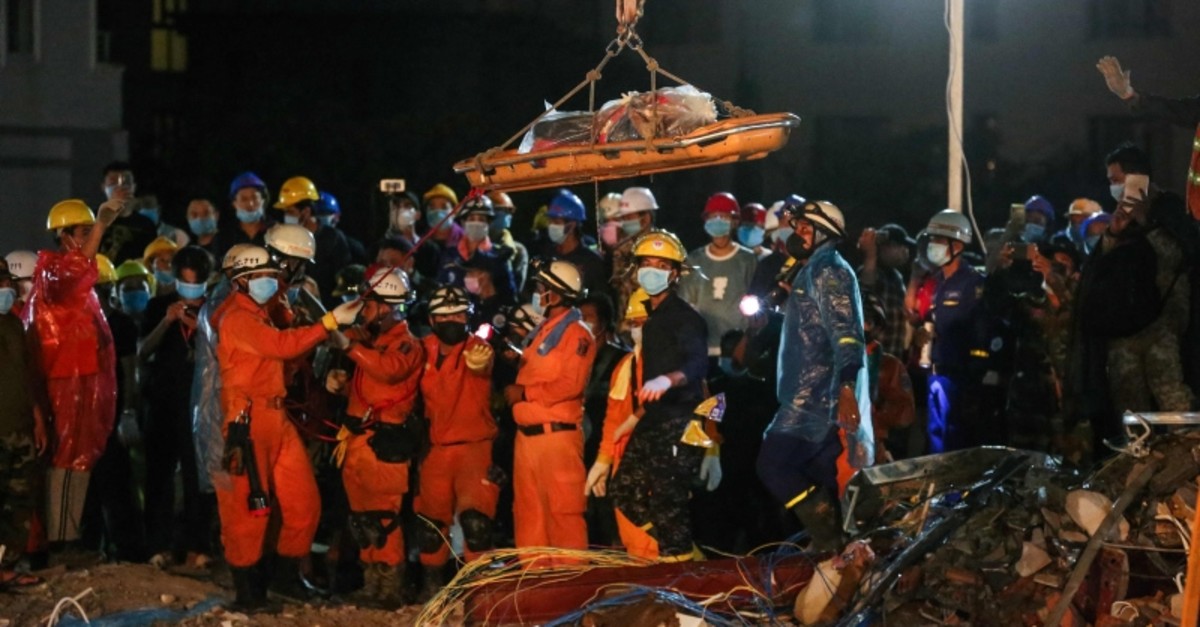 Rescue workers recover the body of a victim from the debris of an under-construction building two days after it collapsed in Sihanoukville early on June 24, 2019. (AFP Photo)
by reuters Jun 24, 2019 12:56 pm
Cambodian Prime Minister Hun Sen sacked a top disaster management official on Monday, saying he had failed to take responsibility for a Chinese-owned building under construction that collapsed on the weekend killing at least 28 people.

Some 24 people were injured and many were feared still entombed in a mountain of twisted steel and rubble after the building came down early on Saturday in the coastal town of Sihanoukville.

Investigators are trying to determine what caused the seven-story steel and concrete structure to crumple without warning before dawn, trapping construction workers who were sleeping on the site.

The port and resort town has seen a rush of Chinese investment in recent years, especially in the casino, property and tourism sectors, and questions have been raised about construction standards.

Prime Minister Hun Sen fired Nhim Vanda, deputy director of the National Committee on Disaster Management, because of a "lack of responsibility, and for lying" over the disaster, Hun Sen said on his Facebook page. He did not elaborate.

In a rare move, Yun Min, the governor of Preah Sihanouk province, submitted his resignation and it was accepted, Hun Sen said.

"I apologize for the loss and tolerance, to all citizens, civil servants, armed forces of all kinds, in Preah Sihanouk province, for my shortcomings," Yun Min said in a Facebook post.

High-level resignations over wrongdoing are rare in Cambodia.

Four people have been detained for questioning, Cambodian officials said. The Chinese embassy said three of them were Chinese nationals.

"The Embassy supports a thorough investigation of the accident and necessary measures by competent Cambodian authority in accordance with the law," the embassy said in a statement.

Sihanoukville is home to Cambodia's largest port and a Chinese Special Economic Zone linked to Beijing's Belt and Road initiative.

Provincial officials said 80% of the debris from the site had been cleared. It was not clear how many more people were missing.
RELATED TOPICS