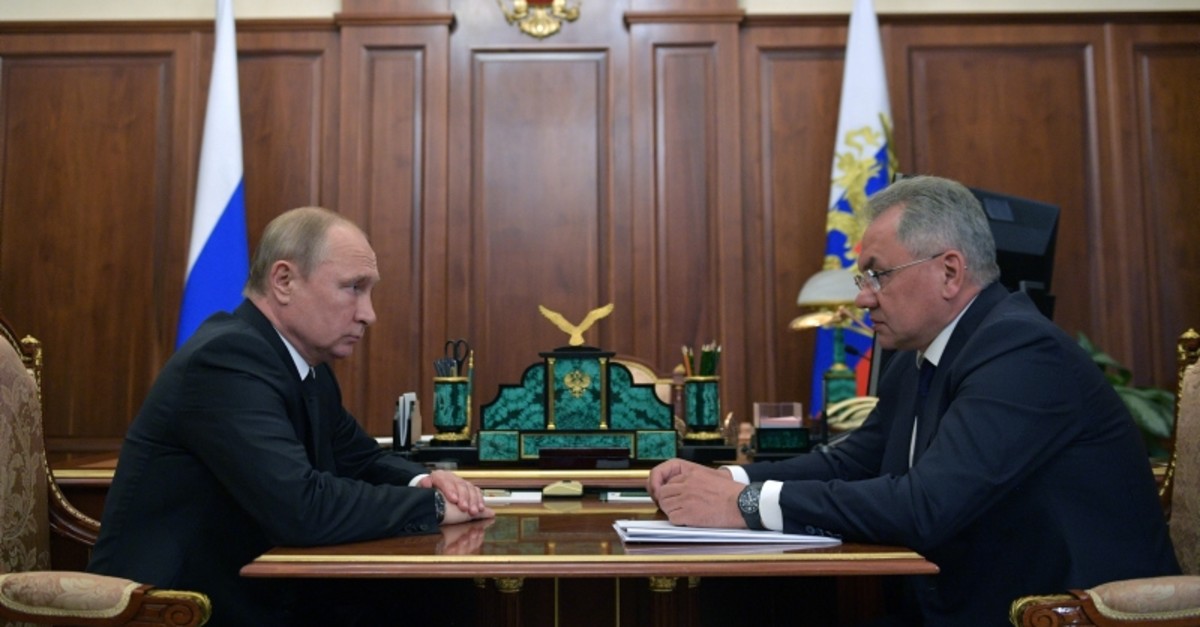 Russia's President Vladimir Putin (L) and Defence Minister Sergei Shoigu attend a meeting to discuss a recent incident with a Russian deep-sea submersible, which caught fire in the area of the Barents Sea, in Moscow, July 2, 2019. (REUTERS Photo)
by Compiled from Wire Services Jul 02, 2019 8:36 pm

Russian President Vladimir Putin will meet Defense Minister Sergei Shoigu soon, RIA quoted the Kremlin as saying on Tuesday, after 14 sailors on board a deep water research sub were killed in a fire while carrying out a survey of the sea floor.

Putin canceled a scheduled appearance and then summoned his defense minister to get briefed on the situation.

Following their meeting, Putin called the loss of 14 navy officers a "big loss," ordering a full investigation into what happened.

"It is a big loss for the navy, and for the army as a whole," Putin told Shoigu in a televised meeting.

Although the name of the vessel was not made public, the media speculated it was a highly secret AS-12 deep-water submarine. Putin did not confirm the type of vessel but said it was unusual.

"It is not an ordinary vessel, as we know, it's a scientific-research vessel, its crew is highly professional," Putin said, adding that the victims included seven Captain First Rank officers -- the highest possible for staff officers in the Russian navy.

"I offer most sincere condolences to the families of the victims," Putin said, ordering Shoigu to travel to the northern town Severomorsk, where the submersible has been docked.

"I ask you to go to Severomorsk to personally hear reports and direct a commission to define the causes of this tragedy."

The blaze marks the most serious Russian naval incident since 2008, when 20 died when a firefighting system was accidentally initiated while the Nerpa nuclear-powered submarine of Russia's Pacific Fleet was undergoing trials.

In the deadliest naval incident in post-Soviet Russia, the Kursk nuclear submarine exploded and sank on Aug. 12, 2000, during naval maneuvers in the Barents Sea, killing all 118 crew members.