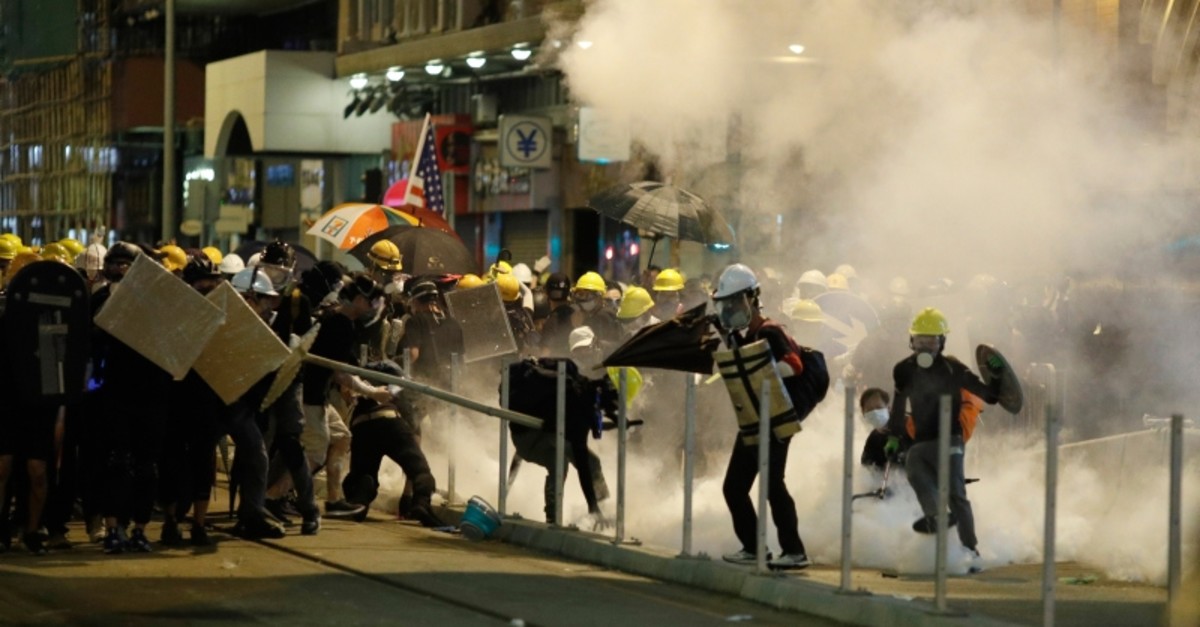 Hong Kong descended into chaos Sunday night as riot police fired tear gas and rubber bullets at anti-government protesters hours after China's office in the city was daubed with eggs and graffiti in a vivid rebuke to Beijing's rule.

Acrid clouds of tear gas wafted through the city's densely packed commercial district as police battled masked protesters after another huge protest march, with seemingly no end in sight to the turmoil engulfing the finance hub.

A group of masked, stick-wielding government supporters also descended on a group of protesters in a train station, beating multiple people including reporters who live-streamed the assaults.

Following the march, during which protesters railed against what they describe as excessive police force during earlier demonstrations, several hundred demonstrators headed to the city's Chinese Liaison Office. There, some people were seen hurling eggs and black paint at the building.

"This is a riot," the Global Times, a mouthpiece for the Communist Party, wrote on Twitter, condemning the protest.

Shortly before police were due to intervene, the protesters fled the scene.

There were other instances of civil disobedience on the sidelines of the march, which organizers said was attended by 430,000 people.

Some protesters erected street blockades near the local parliament and seat of government, which in turn were secured with two-meter-high barriers surrounding the buildings.

A group of masked men, many wielding sticks and dressed in white clothes, attacked anti-government protesters inside a Hong Kong station on Sunday night, a major escalation of the crisis now engulfing the city.

A live Facebook broadcast by local news outlet Stand News showed the men charge into a crowd of protesters in Yuen Long, a district in the city's northwest, close to the border with China.

The female reporter who was broadcasting Stand News' footage was one of those attacked as she was knocked to the ground and kicked multiple times.

At least one man could be seen with blood covering his face.

This was the third mass protest since early June over an extradition bill that would allow for criminal suspects to stand trial in mainland China. Estimates for attendance at the first two events have varied from between hundreds of thousands and up to 2 million people.

Large protests began last month in opposition to a contentious extradition bill that would have allowed Hong Kong residents to stand trial in mainland China, where critics say their rights would be compromised.

Hong Kong's leader, Carrie Lam, has declared the bill dead, but protesters are dissatisfied with her refusal to formally withdraw the bill. Some are also calling for her to resign amid growing concerns about the steady erosion of civil rights in city.

A former British colony, Hong Kong is a Chinese territory that has been promised certain democratic freedoms under the framework of "one country, two systems." Fueled by anger at Lam and an enduring distrust of the Communist Party-ruled central government in Beijing, the demonstrations have ballooned into calls for electoral reform and an investigation into alleged police brutality.

"Free Hong Kong! Democracy now!" the protesters chanted on Sunday, forming a dense procession through Hong Kong's Wan Chai district as they were joined by others who had been waiting in side streets.

Protesters repeated the five points of their "manifesto," which was first introduced when a small group of them stormed the legislature earlier this month. The protesters' main demands include universal suffrage — direct voting rights for all Hong Kong residents — as well as dropping charges against anti-extradition protesters, withdrawing the characterization of a clash between police and protesters as a "riot" and dissolving the Legislative Council.

Protesters read the demands aloud in both English and Cantonese in videos released Saturday.

"We did not want to embark on this path of resisting tyranny with our bare bodies," they said, "but for too long, our government has lied and deceived, and refused to respond to the demands of the people."

While the demonstrations have been largely peaceful, some confrontations between police and protesters have turned violent. In Sha Tin district last Sunday, they beat each other with umbrellas and bats inside a luxury shopping center. Demonstrators broke into the Legislative Council building on July 1 by moving past barricades and shattering windows. Meanwhile, police officers have used pepper spray, tear gas, bean bag rounds and rubber bullets to quell the crowds.

On Friday, Hong Kong police discovered a stash of a powerful homemade explosive and arrested a man in a raid on a commercial building. Materials voicing opposition to the extradition bill were found at the site, local media said, but a police spokesman said no concrete link had been established and the investigation was continuing.