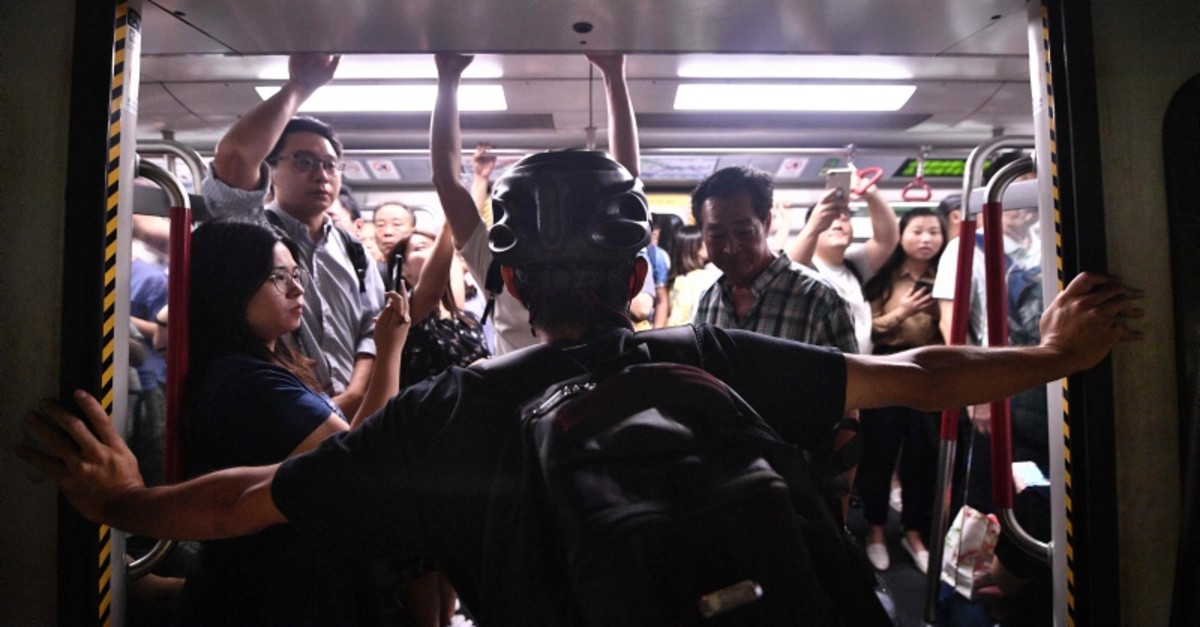 A protester blocks the MTR underground train from closing as protesters blocked the train doors at Fortress Hill station in Hong Kong on August 5, 2019 in their efforts to disrupt the morning rush hour commute. (AFP Photo)
by Aug 05, 2019 8:41 am

Hong Kong's pro-democracy protesters are close to creating a "very dangerous situation", the city's leader warned Monday as train travel and international flights in the global financial hub were thrown into chaos.

The peak-hour efforts to lock down Hong Kong's transport sector on Monday morning followed two months of unprecedented and often violent unrest, fueled by demands for greater democracy in the semi-autonomous Chinese city.

With commuters unable to get to work and international travelers facing delays, chief executive Carrie Lam held a press conference to warn protesters and signal authorities would not buckle under the growing pressure.

"(They) have seriously undermined Hong Kong's law and order and are pushing our city, the city that we all love and many of us helped to build, to the verge of a very dangerous situation," Lam said.

She later referenced called by protesters for a "revolution", describing this as a challenge to the 'one country, two systems' framework under which Hong Kong has been ruled since it returned from British to Chinese rule in 1997.

"I dare say they are trying to destroy Hong Kong," Lam said.

More than 100 flights at the city's airport — one of the world's busiest — were also listed as cancelled on Monday morning.

Many disrupted flights were with Cathay Pacific.

The carrier did not give a reason for the cancellations, but its flight attendants union confirmed some of its members had walked out.

"Over the last 50 days, the government has been ignoring the demands of the people and using only police force to try to suppress voices, causing countless Hong Kong people to despair," the union said in a statement on its Facebook page.

Some key roads were also blockaded, causing traffic gridlock, as the protesters urged a general strike across the city.

But people from all walks of life indicated plans online to either strike or phone in sick on Monday — from civil servants and social workers, to bus drivers and even employees of the city's Disneyland.

Alongside the strike, protesters planned to hold rallies in seven different parts of the city on Monday.

While some commuters were angered by the disruptions, others said they supported the action.

"As long as the government doesn't respond then for sure the movement will escalate," a civil servant, who gave his surname as Leung, told AFP as he tried to make his way to work.

The efforts for a general strike — a rare sight in a freewheeling finance hub where unions traditionally have little sway — is aimed at showing Beijing there is still broad public support for a protest movement that keeps hitting the streets but has so far won few concessions.

The protests were triggered by opposition against a planned law that would have allowed extraditions to mainland China.

It quickly evolved into a wider movement for democratic reform and a halt to eroding freedoms.

Even before Lam's press conference, authorities in Hong Kong and Beijing had signaled a hardening stance to the protests.

The Chinese military described the unrest last week as "intolerable" and released a propaganda video showing a drill of troops quelling a protest in Hong Kong.

Dozens of protesters were also charged with rioting over the past fortnight, a charge with a maximum penalty of 10 years in jail.

Over the weekend riot police fired tear gas at protesters in multiple districts throughout Saturday and Sunday night.

The past fortnight has seen a surge in violence on both sides with police repeatedly firing rubber bullets and tear gas to disperse increasingly hostile projectile-throwing crowds.

Under the terms of the 1997 handover deal with Britain, Hong Kong has rights and liberties unseen on the Chinese mainland, including an independent judiciary and freedom of speech.

But many say those rights are being curtailed, citing the disappearance into mainland custody of dissident booksellers, the disqualification of prominent politicians and the jailing of pro-democracy protest leaders.

Public anger has been compounded by rising inequality and the perception that the city's distinct language and culture are being threatened by ever-closer integration with the Chinese mainland.