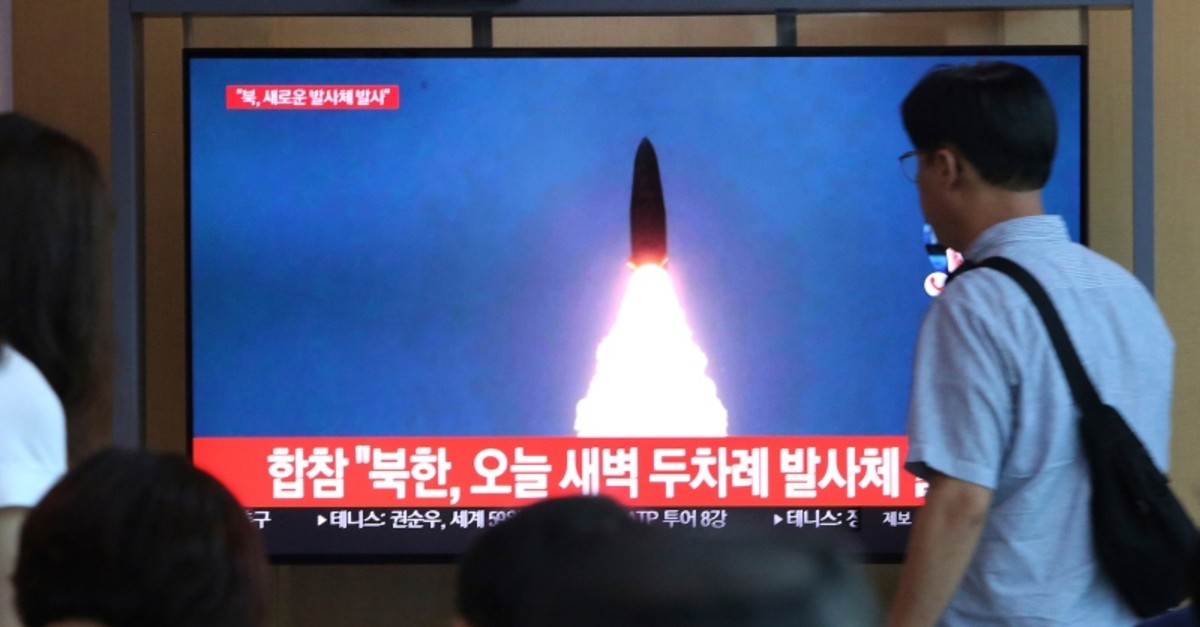 People watch a TV showing a file footage of a North Korea's missile launch during a news program at the Seoul Railway Station in Seoul, South Korea, Friday, Aug. 2, 2019. (AP Photo)
by Associated Press
Aug 06, 2019 1:36 am

North Korea on Tuesday continued to ramp up its weapons demonstrations by firing unidentified projectiles twice into the sea while lashing out at the United States and South Korea for continuing their joint military exercises that the North says could derail fragile nuclear diplomacy.

South Korea's military alerted reporters of the launches just minutes before an unidentified spokesperson of the North's Foreign Ministry released a statement denouncing Washington and Seoul over the start of their joint exercises on Monday. The statement said the drills, which North Korea sees as an invasion rehearsal, leave the country "compelled to develop, test and deploy the powerful physical means essential for national defense."

The North's spokesperson said Pyongyang remains committed to dialogue, but it could seek a "new road" if the allies don't change their positions.

"It is too axiomatic that a constructive dialogue cannot be expected at a time when a simulated war practice targeted at the dialogue partner is being conducted," the spokesperson said. "We remain unchanged in our stand to resolve the issues through dialogue. But the dynamics of dialogue will be more invisible as long as the hostile military moves continue."

Seoul's Joint Chiefs of Staff said the projectiles were launched from an area near the North's western coast and flew cross-country before landing in waters off the country's eastern coast.

It didn't immediately say how many projectiles were fired or how far they flew.

North Korea had said it will wait to see if the August exercises actually take place to decide on the fate of its diplomacy with the United States and whether to continue its unilateral suspension of nuclear and long-range missile tests, which leader Kim Jong Un announced last year amid a diplomatic outreach to Washington.

South Korea's Defense Ministry on Monday didn't initially confirm the start of the joint military exercises before Defense Minister Jeong Kyeong-doo told a parliamentary hearing that the drills have begun. Jeong did not provide specific details about the drills, which were expected to be computer simulated and not involve actual combat troops and equipment.

The North last week conducted two test-firings of what it described as a new rocket artillery system and conducted a short-range ballistic missile launch on July 25, which it described as a "solemn warning" to South Korea over its plans to continue military drills with the United States. Experts say the North's weapons display could intensify in the coming months if progress isn't made on the nuclear talks.

The allies have scaled down their major military exercises and stopped regional dispatches of U.S. strategic assets such as long-range bombers and aircraft carriers since the first summit between Kim and President Donald Trump June 2018 in Singapore to create space for diplomacy.

The North insists even the downsized drills violate agreements between Kim and Trump, who in Singapore vowed to improve bilateral ties and issued a vague statement on a nuclear-free Korean Peninsula without describing when and how it would occur.

Nuclear negotiations have been at a standstill since the collapse of the second Trump-Kim summit in Vietnam in February over disagreements in exchanging sanctions relief and disarmament.

The North's recent weapons tests have dampened the optimism that followed the third summit between Trump and Kim on June 30 at the inter-Korean border. The leaders agreed to resume working-level nuclear talks that stalled since February, but there have been no known meetings between the two sides since then.