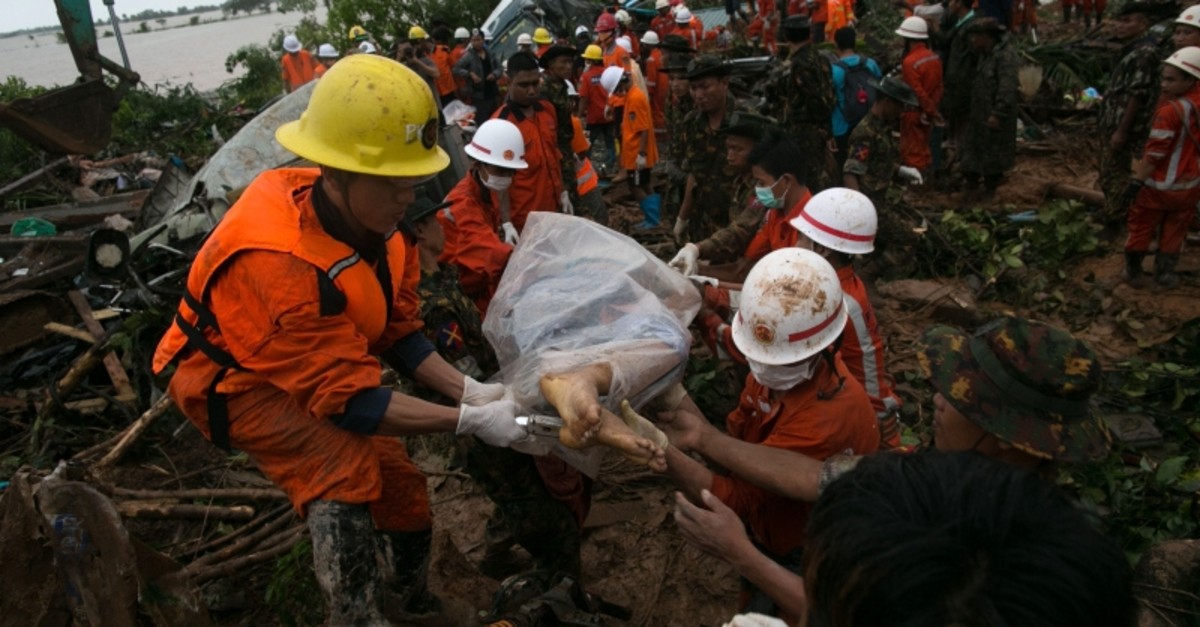 Myanmar troops and emergency responders scrambled to provide aid in flood-hit parts of the country Sunday after rising waters forced residents to flee by boat and a landslide killed at least 53 people, the Myanmar Fire Services Department announced on Sunday.

The landslide, triggered by torrential rainfall the previous night, swept away dozens of homes in the village of The Phyu Gon, located at the foot of a mountain in Mon state's Paung township. Hundreds of rescue workers pulled bodies from the muddy rubble throughout the weekend, and rescue efforts will continue through the coming week.

But this season's deluge has tested disaster response after a fatal landslide on Friday in southeastern Mon state was followed by heavy flooding that reached the roofs of houses and treetops in nearby towns.

As the rainy season reaches its peak, the country's armed forces are pitching in and have readied helicopters to deliver supplies.

Heavy rains pounded other parts of Mon, Karen and Kachin states, flooding roads and destroying bridges that crumbled under the weight of the downpour.

But the bulk of the relief effort is focused on hard-hit Mon, which sits on the coast of the Andaman sea.

About two-thirds of the state's Ye township remained flooded, an administrator said, as drone footage showed only the tops of houses, tree branches and satellite dishes poking above the waters.

Families realized they had to leave in the early hours Sunday, packing possessions into boats, rowing towards higher ground or swimming away.

Than Htay, a 40-year-old from Ye town, told AFP that water rose to their waists around 2 a.m. and she and her family members started shouting for help.

The heavy rains muffled their pleas but a boat happened to pass by and gave them a ride.

"That's why we survived. We thought we were dead," she said.

Another resident said this year's flooding was the worst they had experienced.

Floodwaters have submerged more than 4,000 houses in the state and displaced more than 25,000 residents who have sought shelter in monasteries and pagodas, according to state-owned Global New Light of Myanmar.

Vice President Henry Van Thio visited landslide survivors in a Paung township village on Saturday and "spoke of his sorrow" while promising relief, the paper reported.

The search for victims continued later Sunday though the rain has made the process more difficult.

"We are still working. We will continue searching in the coming days as well," Paung township administrator Zaw Moe Aung said.

Climate scientists in 2015 ranked Myanmar at the top of a global list of nations hardest hit by extreme weather.

That year more than 100 people died in floods that also displaced hundreds of thousands.