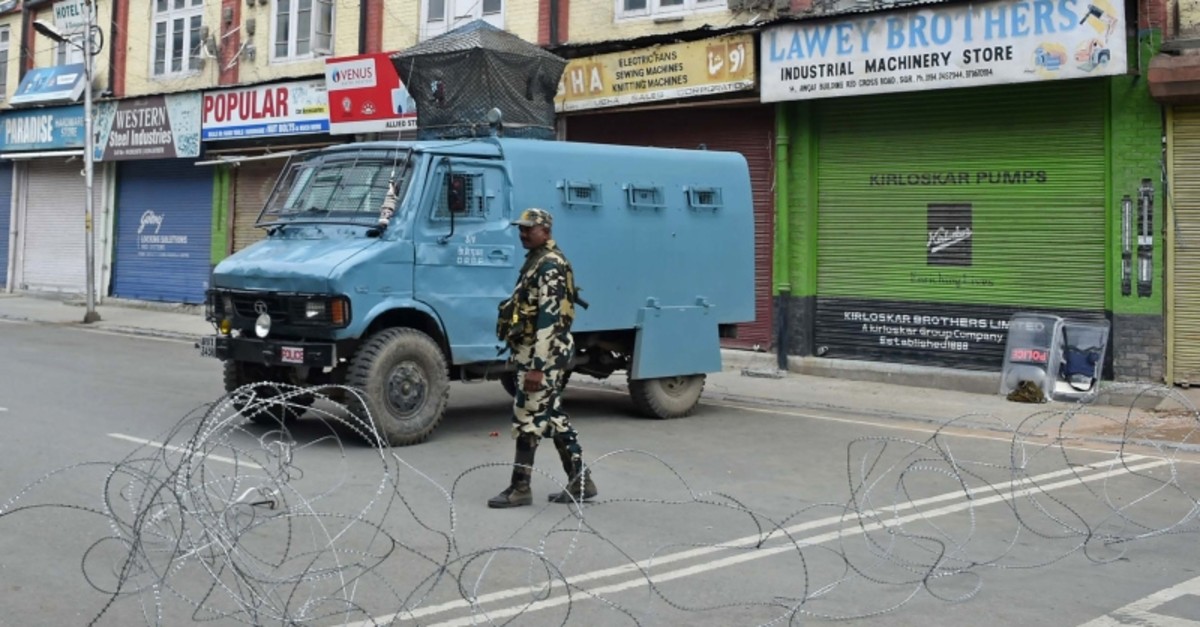 A member of the Indian security forces stands guard during a lockdown in Srinagar on August 16, 2019, after the Indian government stripped Jammu and Kashmir of its autonomy. (AFP Photo)
by Compiled from Wire Services Aug 16, 2019 4:35 pm

India's government assured the Supreme Court on Friday that the situation in disputed Kashmir is being reviewed daily and unprecedented security restrictions will be removed over the next few days, an attorney said after the court heard challenges to India's moves.

Jammu and Kashmir Chief Secretary B.V.R. Subramaniam confirmed there would be some loosening, telling reporters in Srinagar, the main city in Indian-controlled Kashmir, that landline phone services would be restored gradually beginning Friday night and schools reopened from Monday.

He didn't announce any immediate restoration of mobile phone services and internet connections, which he said could be misused by terrorist groups.

"You will find a lot of Srinagar functioning tomorrow morning," Subramaniam said.

A heavy troop presence and restrictions including a near-constant curfew and a news blackout remained in place for a 12th day. The government imposed the lockdown to avoid a violent reaction to its decision on Aug. 5 to downgrade Kashmir's autonomy by revoking Article 370 of the Indian constitution, which granted the Muslim-majority region autonomy except in matters of foreign affairs, defense and communications. The move divided the erstwhile Jammu and Kashmir state into two federally-administered territories.

India deployed 10,000 additional troops, joining the half a million already there.

Kashmiri politicians -- alongside university professors, business leaders and activists -- are among the more than 500 people that have been taken into custody. At least 52 politicians, most of them belonging to the National Conference and Peoples Democratic Party regional parties, are being held at a hotel on the banks of Srinagar's Dal Lake. A senior government official said authorities had booked 58 rooms in the hotel. "These leaders are locked inside the hotel rooms but are allowed to meet at dinner and lunch only in a dining hall," the official said, who declined to be identified.

Celebrations for Islamic festival Qurban Bayram (Feast of the Sacrifice), also known as Eid al-Adha, were massively curtailed on Monday, including with Srinagar's main mosque shut. The building remained off limits for prayers on Friday.

The Supreme Court decided to give the government more time before ruling on a petition demanding the lifting of media restrictions, attorney Vrinda Grover told reporters. She represents Kashmir Times editor Anuradha Bhasin, who said she was unable to publish her newspaper in Srinagar.

Subramaniam also said that government offices had started functioning normally. He said that Friday's prayers passed off peacefully in the region and life in 12 of the region's 22 districts was almost back to normal.

Public transport will be restored gradually after evaluating the security situation, he said.

"Some preventive arrests were made in the region as a preventive measure to maintain law and order," Subramaniam said, though he did not give the number of people in government custody.

He also said there has not been a single loss of life since security forces imposed the lockdown early this month.

"We have prevented any loss of life or serious injuries to anyone despite concerted efforts by terrorist groups, radical groups and continuing efforts by Pakistan to destabilize the situation," he said.

Despite the crackdown, last Friday residents said some 8,000 people took to the streets and that the military used pellet-firing shotguns.

The Indian government confirmed the clashes only after several days had passed, blaming them on stone-throwing "miscreants" and saying its forces reacted with "restraint".

There was also a smaller demonstration on Monday and there have been reports of others.

Meanwhile, the family of a Kashmiri journalist for a regional daily newspaper said he has been detained by the Indian armed forces. Irfan Amin Malik works for Greater Kashmir, one of the largest newspapers in Kashmir.

Malik's father, Mohammed Amin Malik, told The Associated Press that Malik was taken into custody late Wednesday night at his house in Tral in Pulwama, a southern district in Kashmir.

"We are worried about our son," he said.

Malik is the first journalist known to have been detained since India's decision to revoke Kashmir's special constitutional status. The decision has raised tensions with Pakistan. The nuclear-armed rivals both claim Kashmir and the Himalayan region is divided between them.

Pakistan's military said earlier Friday that Indian firing across the Line of Control (LoC) dividing the region killed another soldier, raising the death toll to six in less than 24 hours.

Pakistan's foreign ministry summoned an Indian diplomat and lodged a protest over the killings. The ministry said in a statement that the "cease-fire violations by India are a threat to regional peace and security and may lead to a strategic miscalculation."

There was no immediate comment from the Indian army.

Pakistan Prime Minister Imran Khan condemned the continued clampdown in Indian-administered Kashmir and warned his counterpart, Narendra Modi, that "no nation can be defeated militarily when it rises for independence."

Khan in a tweet described Modi as a "fascist, Hindu supremacist." He equated Modi with Adolf Hitler and said he feared "genocide of Muslims in Kashmir."

Before Indian elections in April and May, Khan had expressed hope that the Kashmir issue could be resolved through talks if Modi's Hindu nationalist party won the vote.

Modi has defended the Kashmir changes as freeing the territory from separatism, and his supporters welcomed the move.

One of the revisions allows anyone to buy land in Indian-controlled Kashmir, which some Kashmiris fear could change the region's culture and demographics. Critics have likened it to Israeli settlements in Palestinian territories.

Kashmir has been divided between India and Pakistan since independence from Britain in 1947.

Tens of thousands of people, most of them civilians, have died in an uprising against Indian rule that has raged since 1989.

The territory has been the spark for two wars and countless clashes between the two nuclear-armed arch-rivals, most recently in February when they conducted tit-for-tat air strikes.

In a rare step, the UN Security Council will discuss the situation behind closed doors later on Friday, diplomats said.