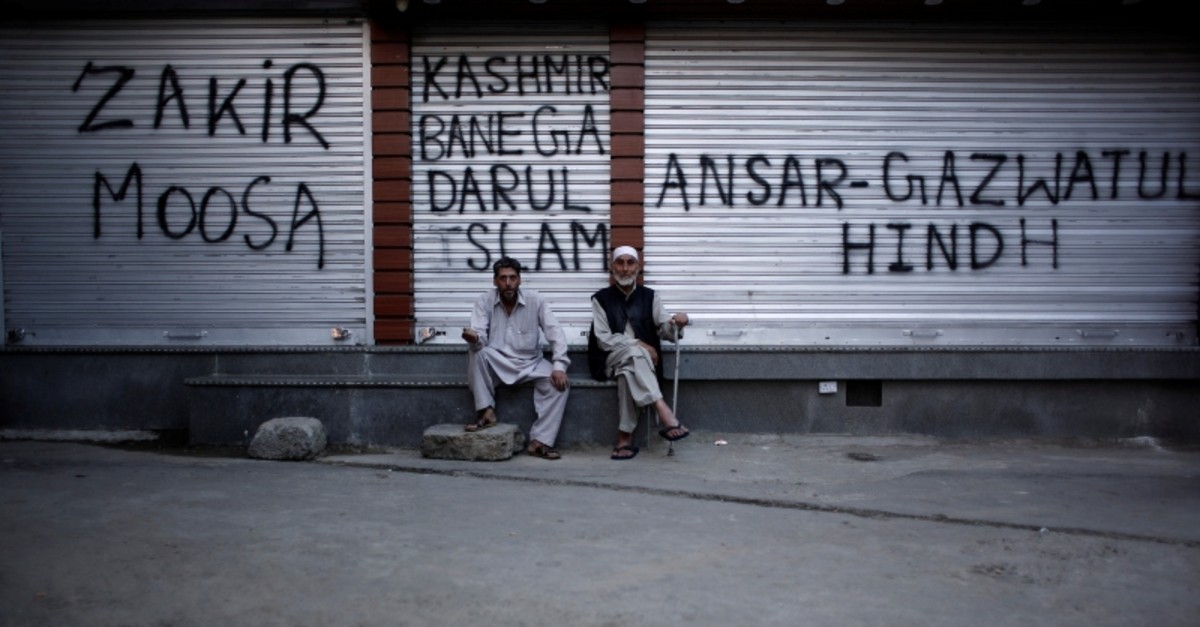 Kashmiri men sit in front of the closed shops painted with graffiti during restrictions after scrapping of the special constitutional status for Kashmir by the Indian government, in Srinagar, Aug. 20, 2019. (Reuters Photo)
by Aug 21, 2019 10:45 am

A suspected militant and a policeman were killed in the first gun battle since New Delhi stripped Indian Kashmir of its autonomy, police said Wednesday after U.S. President Donald Trump offered to mediate the "explosive" situation.

In a further sign of rising tensions, Pakistan said meanwhile that three of its civilians died in Indian gunfire from across the de-facto border in Kashmir known as the Line of Control (LoC).

The Press Trust of India news agency quoted officials as saying one Indian soldier died and four were wounded when Pakistani troops opened fire on forward posts and villages along the LoC in the Poonch district on Tuesday.

Both India and Pakistan are nuclear powers and the situation in Kashmir, divided between them since 1947, is further complicated by the fact that China also claims part of the Himalayan region.

Trump -- who has previously spoken of his willingness to mediate -- said he would raise the situation over the weekend with Indian Prime Minister Narendra Modi. Both men are expected in France for a summit of the Group of Seven industrialized nations.

"Kashmir is a very complicated place. You have Hindus and you have the Muslims and I wouldn't say they get along so great," Trump told reporters at the White House.

"I will do the best I can to mediate," he added.

At least 4,000 people have been detained in Indian-controlled Kashmir, according to security and government sources, since early August when authorities imposed a communications blackout and restricted freedom of movement in the region.

Highlighting the growing international concern, a senior U.S. official, who has just returned from a visit to the region, called on India Tuesday to quickly release detainees and restore basic liberties.

"We continue to be very concerned by reports of detentions, and continued restrictions on the residents of the region," the State Department official told reporters.

"We urge respect for individual rights, compliance with legal procedures and an inclusive dialogue," said the official, who spoke on condition of anonymity.

Officials in France said that President Emmanuel Macron would bring up Kashmir with Modi when the two meet in Paris ahead of the G7 summit.

Earlier this year India and Pakistan again came close to all-out conflict over the region after a militant attack in Indian-held Kashmir in February was claimed by a group based in Pakistan, sparking tit-for-tat air strikes.

India has bristled at any suggestion of foreign mediation and strenuously denied a claim by Trump last month that Modi had invited him to act a peacebroker.

It was also left seething when the U.N. Security Council held its first formal meeting on Kashmir in nearly half a century last week, saying it would not accept "international busybodies... tell(ing) us how to run our lives."

British Prime Minister Boris Johnson told Modi in a phone call on Tuesday that the Kashmir dispute must be resolved between India and Pakistan alone, Downing Street said.

An Indian statement said Modi had raised with Johnson the "violence and vandalism perpetrated by a large mob against the High Commission of India in London" on Aug. 15.

Several thousand people had protested in London that day over India's Kashmir move. Police separated them from a smaller pro-Indian counter-demonstration and made at least one arrest.

Clashes are common between Indian security forces and militants opposed to Indian rule, with tens of thousands of people killed in the past 30 years, most of them civilians, adding to public resentment towards New Delhi.

But the latest gun battle north Kashmir's Baramulla district, reported by Kashmir police on Wednesday, since the Aug. 5 move.

A later tweet said that the dead militant was identified as a local man "affiliated" with Lashkar-e-Taiba (LeT).

LeT is a U.N.-listed militant organization based in Pakistan and is accused by India and Washington of masterminding the four-day Mumbai attacks in 2008.