Thousands of Rohingya rally to mark 'Genocide Day' in Bangladesh 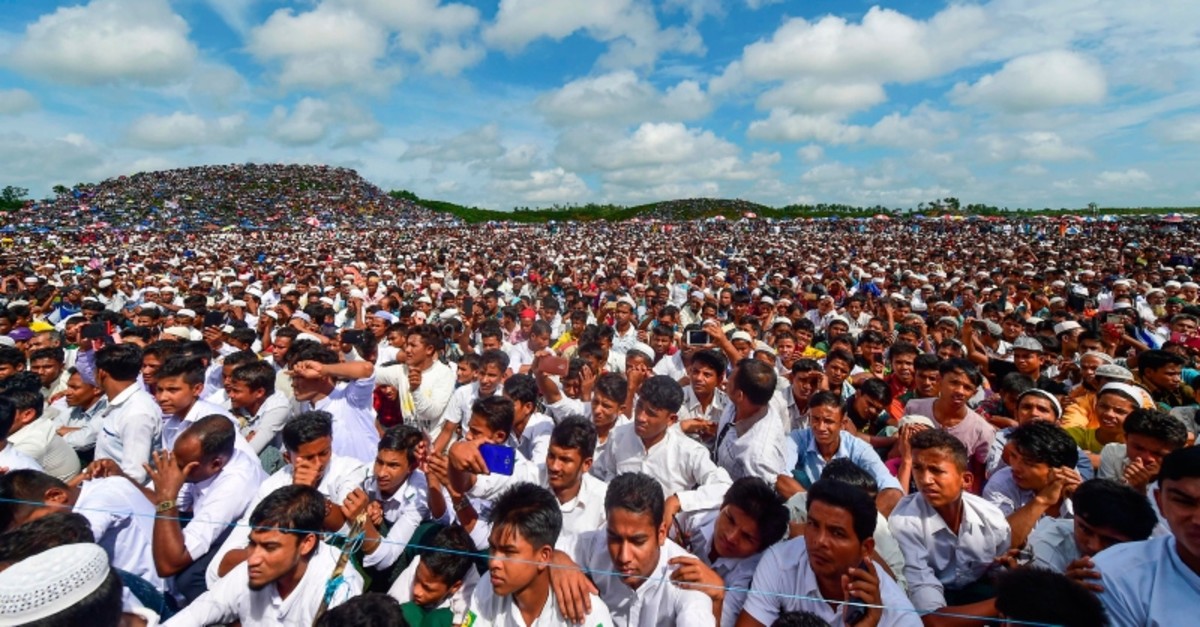 Rohingya refugees gather to mark the second anniversary of the exodus at the Kutupalong camp in Coxu2019s Bazar, Bangladesh, August 25, 2019. (AFP Photo)
by Compiled from Wire Services Aug 25, 2019 12:15 pm

Thousands of Rohingya refugees marked the second anniversary of their exodus from Myanmar into Bangladesh on Sunday by rallying, crying and praying as they demanded Myanmar grant them their citizenship and other rights before they agree to return.

The exact number of protesters was not yet known as news agencies reported varying number of demonstrators, from 30,000 to 200,000.

The protest came days after Bangladesh with the help of the U.N. refugee agency attempted to start the repatriation of 3,450 Rohingya Muslims. None agreed to go back voluntarily, citing fear for their safety and a lack of confidence in Myanmar. The UNHCR said on Thursday that building confidence was essential for repatriation.

Myanmar had scheduled Aug. 22 for the beginning of the process but it failed for a second time after the first attempt last November.

The repatriation deal is based on an understanding that the return has to be "safe, dignified and voluntary." The refugees also insisted on receiving Myanmar citizenship and other rights, which the Buddhist-majority nation has refused to grant so far. Bangladesh's Prime Minister Sheikh Hasina said that her administration will not use force to send them back despite a huge burden on the South Asian country.

They raised their hands at a prayer session and cried, many loudly as an imam led the sermon with an emotional narration of their sufferings. The prayer was held for the victims of the killings, rape and arson attacks by Myanmar soldiers and Buddhist militias. Security was tight in the camps despite the Rohingya groups' pledge that they would protest peacefully.

"Oh Allah, how much blood we have to give to have peace in our life? We have been shedding our blood for decades and now we are here. Please help us, we want to go back," said the imam.

"We want to tell the world that we want our rights back, we want citizenship, we want our homes and land back," said Muhib Ullah, one of the organizers of Sunday's protest. "Myanmar is our country. We are Rohingya."

Myanmar has consistently denied human rights violations and says military operations in Rakhine state, where most of the Rohingya fled from, were justified in response to attacks by Rohingya insurgents.

A U.N.-established investigation last year recommended the prosecution of Myanmar's top military commanders on charges of genocide, war crimes and crimes against humanity for the crackdown on the Rohingya. Myanmar dismissed the allegations.

On Thursday, the U.N. Independent International Fact-Finding Mission on Myanmar released a new report concluding rapes of Rohingya by Myanmar's security forces were systemic and demonstrated the intent to commit genocide. The report said the discrimination Myanmar practiced against the Rohingya in peacetime aggravated the sexual violence toward them during times of conflict.

Fortify Rights, a human rights group that has documented abuses in Myanmar, called on the Myanmar government on Saturday to implement recommendations from the Advisory Commission on Rakhine State, which was appointed by Myanmar leader Aung San Suu Kyi in 2016 and led by former U.N. Secretary-General Kofi Annan.

"Rather than deal with ongoing atrocities, the government tried to hide behind the Advisory Commission," said Matthew Smith, chief executive officer of Fortify Rights.

"The commission responded with concrete recommendations to end violations, and the government should act on them without delay. The government needs to urgently address the realities on the ground."

On Thursday, the UNHCR in a statement said the agency and the U.N. Development Program had sought effective access in Myanmar.