Kashmir's 72-year legacy back on agenda between India, Pakistan 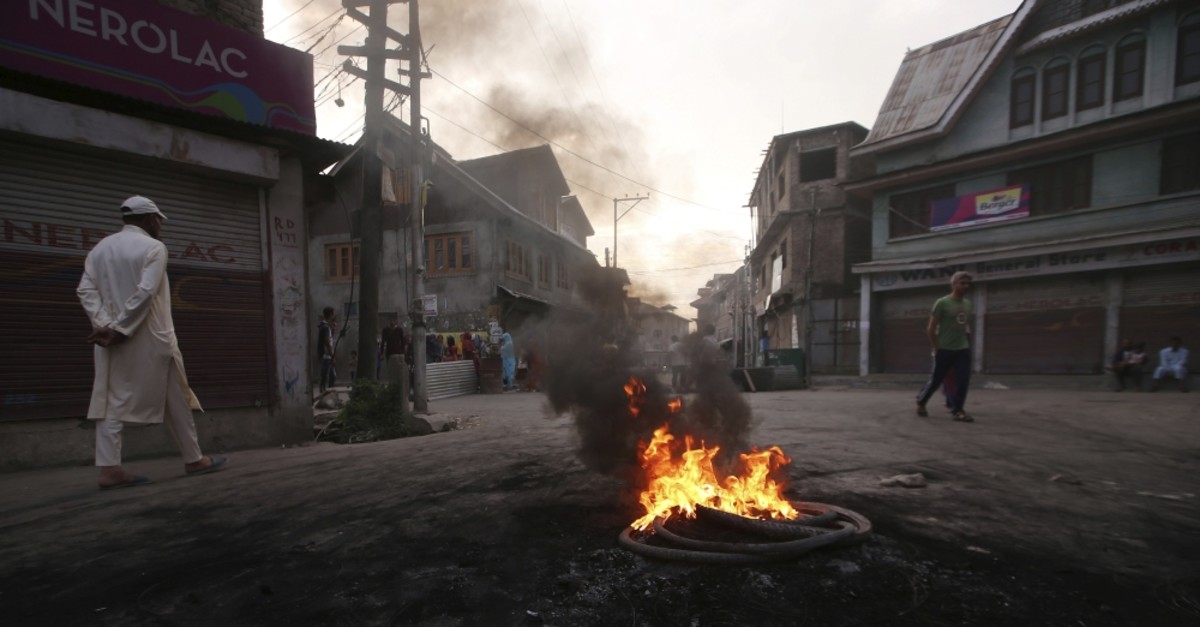 India's decision to repeal Article 370 of the Indian Constitution, granting Kashmir special status, has brought Kashmir in the spotlight of the international community once again.

Following a lockdown in Indian-administered Kashmir, restrictions in communication and a curfew in the early days of the crisis, the issue has become even more important. With India and Pakistan hurling accusations at each other, Kashmir appears to be a battleground between the two neighbors.

As India claims to work toward eradicating alleged "Pakistan-sponsored terrorism" in the region, and Pakistan accuses India of "occupation and torture," relations between the two states are at a low, with the Indian High Commissioner to Pakistan expelled by the Pakistani government. Amidst statements from high-ranking Indian and Pakistani officials, as well as academic analysts, a solution to the 72-year-old conflict looks distant.

This is the second time in a span of six months that the two countries have faced a heated conflict. February had marked an escalation in tensions after an attack on Indian Paramilitary Forces in Pulwama in Kashmir.

On Aug. 5, India revoked Articles 370 and 35A, used to grant Jammu and Kashmir special semi-autonomous status, separate from the central Indian government. With the articles revoked Jammu and Kashmir will no longer have its own constitution and will have to abide by Indian laws and the Indian Constitution as a whole.

The announcement came less than three months into Indian Prime Minister Narendra Modi's re-election in May. After a turbulent campaigning period, the Bharatiya Janata Party (BJP) achieved an overwhelming victory, securing a majority in the lower house of parliament. Pakistan too, has been going through a period of political change following the election of Prime Minister Imran Khan in July 2018. Throughout these elections, Kashmir remained on the agenda of both the newly elected prime ministers.

Article 370 was adopted as part of the Indian Constitution in 1950, three years after Hari Singh, the Hindu ruler of Kashmir, acceded the Muslim majority state to India through the Instrument of Accession. Following the 1947-48 war between India and Pakistan over Kashmir, and the establishment of the Line of Control – the current border dividing Kashmir – Kashmir remains split between India (65%, Indian Administered Kashmir) and Pakistan (35%, Azad Kashmir).

Daily Sabah spoke to both countries' envoys in Ankara to assess the situation, and their respective demands and arguments.

In an exclusive interview, the Ambassador of Pakistan to Turkey, Muhammad Syrus Sajjad Qazi, summed the Pakistani perspective that Indian action in Kashmir can be seen as an occupation. "What is happening in Kashmir, is oppression, repression, persecution, and now, an illegal annexation of a territory the United Nations Security Council states does not belong to India," he said.

Resolutions 39 and 47 passed by the Security Council in 1948, acknowledge that Kashmir is disputed territory between India and Pakistan.

On the other hand, the Ambassador of India to Turkey, Sanjay Bhattacharyya explained the Indian motive behind Aug. 5, and its aftermath. He defended that the initiative of revoking Article 370 was taken with what they believe is Kashmir's best interests given the inequality between conditions and opportunities between the people of Kashmir, and the rest of India. "The Kashmir valley suffered for decades on account of export of terrorism and violence from Pakistan. […] the economy stagnated and the youth were disenchanted," said Bhattacharyya.

Indian Prime Minister Modi has been pushing toward "integrating" Jammu and Kashmir with the rest of India, and this seems to be a manifestation of that promise. The Modi administration defends the view that the move will be beneficial toward development in Kashmir, through opening the state to the entire Indian population, for jobs and investment. This in turn, is supposedly expected to end the regional violence that has been ongoing for decades in Kashmir.

However, Adnan Naseemullah, an academic from the Department of War Studies at King's College London, predicts that it is very unlikely that any of these suggested outcomes will truly prevail. "Kashmiris themselves don't view the Indian central government as an honest actor in relation to their own interests. The only way Modi's plans would work, is if he had the cooperation of the people. A lot of Kashmiris will view this as occupation, not cooperative development," he said.

India's decision to revoke Article 370 has received drastic responses from the international community, with several such as Mehbooba Mufti, former chief minister of Jammu and Kashmir, commenting, "Today marks the darkest day in Indian democracy." Others have expressed concerns about human rights in Kashmir, based on Pakistan's claims that India has been violating human's rights in the region. Curfews, restrictions on social media and censorship are reported as regular appearances in Kashmir, with recent actions bringing with it a lockdown on schools and hospitals in the region.

Ambassador Qazi drew attention to the deteriorating conditions of the people of Kashmir, "The entire state of Kashmir is almost like a prison. Kashmir is under a lockdown." He also poses the question that if joining India is what Kashmiris wanted all along, "why are they not out in the streets [celebrating]?"

In contrast, Ambassador Bhattacharyya responded to Qazi's comments on the recent situation in Kashmir: "Restrictions were withdrawn in a gradual manner and there is no daytime curfew. Landline telephone connections have been restored and mobile connectivity is being opened gradually. All essential commodities and medicines are available and the administration is coordinating the facilitation of citizens' requirements. We have deployed security forces to deal with miscreants and protect the human rights of our citizens," he said.

Speaking to Daily Sabah, Thorsten Wojczewski from the India Institute at King's College London, draws attention to the possibility of further escalation in tensions in the region as a result of turmoil. "In the short and medium-term, a severe deterioration of the humanitarian and security situation in Kashmir will manifest in a further militarization of Kashmir and growing popular unrest. More radical organizations are also likely to capitalize on the frustration and anger of the Kashmiri population and carry out terrorist attacks directed against Indian security forces," Wojczewski explained.

International involvement is another point of contention between the two countries on the issue of Kashmir. While India continues to argue that the option of multilateral discussions was ruled out with the 1972 Shimla agreement between the two countries, Pakistan seeks to rally the international community to apply diplomatic pressure on India. In fact, Pakistani Foreign Minister Shah Mehmood Qureshi has announced that Pakistan will be taking the matter to the International Court of Justice.

The U.N. had previously called for a three-phased plan revolving around first Pakistan, and then India withdrawing forces from the region, and then holding a free and fair plebiscite to determine the fate of Kashmir, this has not been followed through. Furthermore, despite the closed door meeting held by the Security Council on Aug. 16, there has been no official statement issued.

Pakistan continues to look to the international community, and particularly the U.N. as they seek to shed light on the situation in Kashmir. "UNSC [Security Council] resolutions are a result of multilateral diplomacy, and it is always a solution. It is the only solution," Pakistani Envoy Qazi said on the matter.

India's response stated by the Indian ambassador, has been clear, whilst countering remarks by the Pakistani ambassador. "There is no role for any third party on this issue. We have always been prepared for peaceful solutions through bilateral negotiations on all outstanding issues, but Pakistan has to stop terrorism before it comes to the table," said Ambassador Bhattacharyya.

India and Pakistan had come to the brink of war earlier this year when tensions had escalated after 40 Indian Paramilitary police were killed in Pulwama by Jaish-e-Mohammed, a group based in Pakistan. With Indian Prime Minister Modi promising to take revenge, the two countries engaged in a series of border conflicts. Eventually, Prime Minister Imran Khan, agreed to release an Indian pilot that was captured by Pakistan during an Indian airstrike, and cooperate with India against increasing violence in Kashmir. The gesture of goodwill temporarily soothed relations between the two states.

Ambassador Qazi asserts that Pulwama was a result of human rights violations and oppression. "Eventually what is going to happen, when you humiliate the people, you deny them all their rights […] there will be, unfortunately, another Pulwama," he said.

He continued by likening the situation of Kashmir to that of Palestine, accusing India of trying to annex the entirety of Kashmir. "In any fight between oppression and perseverance, perseverance always wins, and Kashmiris will be no different," Qazi said.

Meanwhile, Ambassador Bhattacharyya emphasized on India being a secular nation, and an embodiment of citizens of all backgrounds and faiths, making a comparison between Palestine and Kashmir, and the issue of oppressing Muslim minorities in India, "out of the question." He continued by pointing out that India has received explicit support and statements from all its neighbors, major powers such as the U.S. and U.K. as well as Gulf states such as the United Arab Emirates (UAE) and Bahrain.

Insisting that revoking Article 370 is an "internal issue," Bhattacharyya gave the following remarks, presenting India's desire for non-intervention by third states: "[The measures taken] are in accordance with the Indian constitution and are internal affairs of India. There is no change in our external boundaries or the Line of Control with Pakistan. […] India is a peaceful country, committed to democracy, rule of law, economic and social development. We are fully committed to removing the scourge of terrorism from Jammu and Kashmir and providing development and stability to the region," he said.

Naseemullah also expressed that the action taken on Aug. 5, is an internal matter for India.

"While the revoking of Article 370 is portrayed to be an 'international issue,' in its core, it is a matter of internal politics in India," commented Naseemullah.

In contrast, the Pakistani stance can be read as: Kashmir must be given the autonomy it desires and Pakistan will continue to support Kashmir in this quest. Qazi poses the question, "How hard is it? Just organize a referendum in Kashmir asking them what they want."

The constant fluctuations in relations between the two countries has the international community on standby, with neutral parties like Turkey urging India and Pakistan to meet at the negotiation table to settle the situation in Kashmir. It appears that Kashmir seems important enough that neither country is willing to give up on it. Taking this into account, one wonders if Kashmir is worth a war between the two nuclear powers?

The long-term effects of revoking of Article 370 on Kashmir, and whether or not it will cause any changes to the geopolitical landscape in South Asia, are yet to be seen. What remains certain is that the region will continue to remain relevant for internal politics in India and Pakistan, as well as for bilateral and multilateral relations between the two states, for some more time.