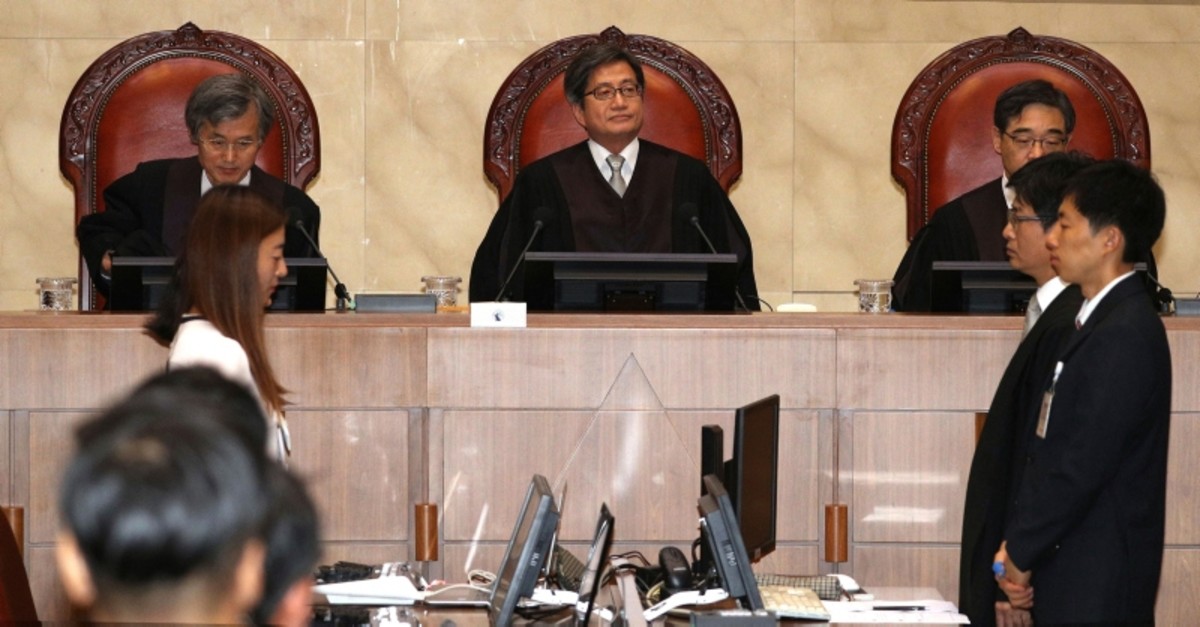 South Korean Chief Justice of the Supreme Court Kim Myeong-su, top center, sits with other justices upon their arrival at the Supreme Court in Seoul, South Korea, Thursday, Aug. 29, 2019. (AP Photo)
by Compiled from Wire Services Aug 29, 2019 10:14 am

South Korea's top court on Thursday sent back jailed ex-President Park Geun-hye's corruption case to a lower court for separate trials for her previously convicted charges, a ruling that could increase her already-lengthy prison term.

South Korea's first female president was impeached by lawmakers in December 2016 and officially removed from office in March 2017 over the scandal that triggered months of street rallies involving millions of people.

An appellate court earlier sentenced Park to 25 years in prison over bribery, extortion, abuse of power and other charges. That was an extension of a 24 year-year prison term set by a district court.

But the Supreme Court ordered the Seoul High Court to deal with Park's bribery charge separately from other charges.

Local media said Park could face a lengthier prison term because courts handling a case with multiple charges typically don't impose all the maximum sentences for each charge.

Park was convicted of colluding with a longtime confidante to take millions of dollars in bribes and extortion from businesses, including Samsung, while she was in office from 2013 to 2016. The two women were also convicted of taking bribes from some of those companies, including more than 7 billion won ($6.5 million) alone from Samsung.

The Supreme Court also ordered a new trial for Samsung heir Lee Jae-yong, who was convicted of offenses including bribery and embezzlement in connection with the scandal that brought down Park.

The de facto head of the world's biggest smartphone and memory chip maker, Lee was jailed for five years in 2017 but freed a year later after an appeals court dismissed most of his bribery convictions and gave him a suspended sentence.

The Supreme Court set aside that decision Thursday and sent his case back for new proceedings.

The decision is a blow to the company, which is by far the biggest of the family-controlled conglomerates that dominate business in the world's 11th-largest economy, and crucial to the country's financial health.

His court case centered on millions of dollars his firm paid to Park's secret confidante Choi Soon-sil, allegedly for government favors such as ensuring a smooth succession for Lee to take over the leadership of the sprawling conglomerate from his ailing father.

Chief Justice Kim Myeong-su said Lee's case would be sent back for new proceedings to readdress multiple allegations, including bribery convictions that had been overturned by the appeals court.

That decision "misunderstood the law on bribery... which is at fault for influencing the ruling," Kim said.

Park, 67, has called herself a victim of political revenge, has refusing to attend her trials since October 2017 and didn't attend Thursday's court session.

Park, a daughter of late President Park Chung-hee, was once the darling of conservatives in South Korea and dubbed by local media as "Queen of election" for her ability to win tight elections. Her fall badly smashed conservatives in South Korea and helped her main liberal rival and current President Moon Jae-in win an easy victory in a by-election triggered by her early departure.