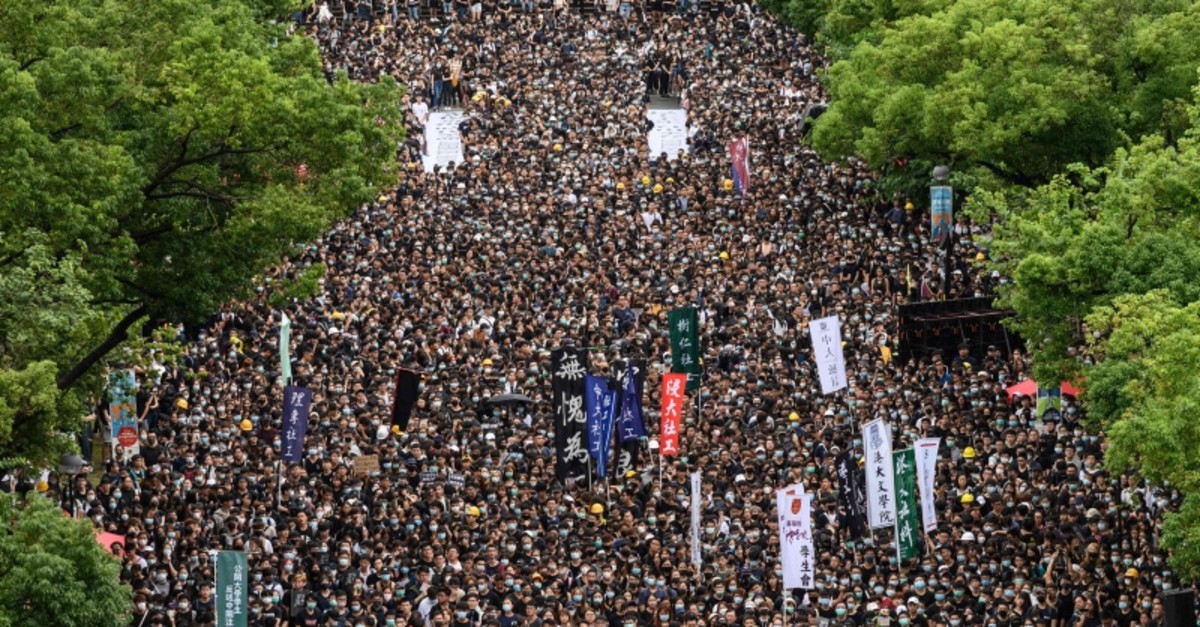 Thousands of students gather during a strike on the first day of school at the Chinese University in Hong Kong, on Monday, Sept. 2, 2019. (AFP Photo)
by Associated Press Sep 02, 2019 2:06 pm

High school students in Hong Kong added gas masks, goggles and hard hats to their formal white uniforms as they joined a strike Monday on the first day of school to show their commitment to the city's fiery anti-government protest movement.

The nearly three months of youth-dominated protests — calling for democracy and an independent inquiry into police conduct — will be tested as classes resume after the summer break in the semiautonomous Chinese territory.

Strikers gathered in the hundreds at the Chinese University of Hong Kong and two public spaces in the city's central business district. Workers on strike congregated in Tamar Park, while at nearby Edinburgh Place, high school students who were skipping class rallied around a black banner that read, "With no future, there's no need to go to class."

At St. Francis' Canossian College, uniformed students kneeled in a line and held up hand-painted signs that read, "The five major demands: Not one is dispensable." The elite girls' school is where Hong Kong Chief Executive Carrie Lam was educated.

"Schools should not be used as places for political demands or exercising pressure," he said at a government briefing.

The protesters' demands include dropping charges against demonstrators who have been arrested and formally withdrawing an extradition bill that would allow Hong Kong residents to be sent to mainland China to stand trial. The appeals are undergirded by a sense among some Hong Kong residents that the Communist Party-ruled mainland government has been eroding the autonomy and civil liberties promised when the former British colony was returned to China in 1997.

Some demonstrators disrupted the morning commute on Monday by blocking train doors, attempting to evade riot police who were hot on their heels by moving quickly between multiple public transit stations.

Officers at Lok Fu station hit protesters with batons and arrested one. Three others were arrested at Lai King station.

On Sunday, the MTR Corp. suspended train service to the airport after several hundred protesters gathered there following calls online to disrupt transportation. They blocked buses arriving at the airport but police in riot helmets kept them out of the terminal. Some protesters hurled bricks and metal poles onto the tracks of the Airport Express rail line, police said, prompting train services to be suspended and forcing some travelers to walk some distance to the airport.

Late at night Saturday, video from Hong Kong broadcaster TVB showed police on the platform of Prince Edward subway station swinging batons at passengers who backed into one end of a train car behind umbrellas. The video also shows pepper spray being shot through an open door at a group seated on the floor while one man holds up his hands.

Police officers said at a briefing Monday that they rejected accusations that they "beat up" ordinary citizens without first confirming their identities. They said they specifically targeted those who they believed to be rioters, including those who had changed out of their black protester outfits, and arrested 63 people on suspicion of illegal assembly and possessing explosives and offensive weapons.

Radical protesters have "hijacked the name of justice," Assistant Commissioner of Police Mak Chin-ho said Monday. "The biggest victims are the citizens of Hong Kong."

Clashes between police and protesters have become increasingly violent, as the self-described "front-line" demonstrators use gasoline bombs and throw rods at officers. Authorities in turn have employed water cannons, tear gas, rubber bullets and batons.

The protesters say that a degree of violence is necessary to get the government's attention after peaceful rallies were futile. Lam's administration, however, maintains that the violence must first end before any fruitful dialogue can begin.

"We always say that we must stop the violence right away, and then kick off the dialogue," said Administration Secretary Matthew Cheung Kin-Chung.