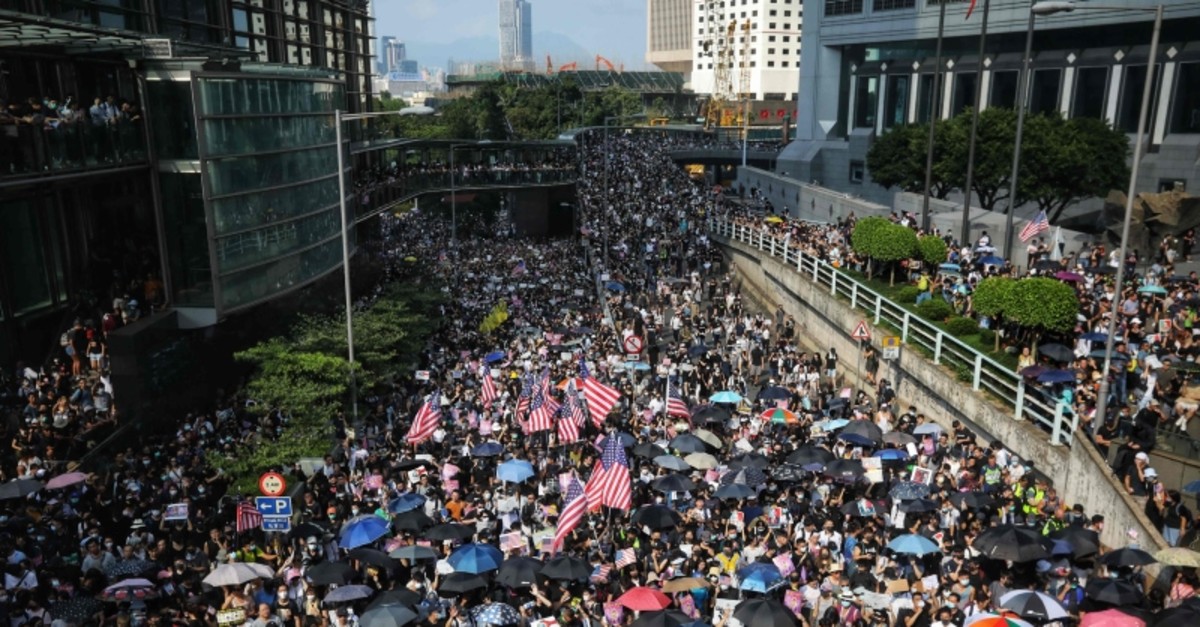 Protesters wave US flags as they march in Hong Kong on September 8, 2019, to call on the US to pressure Beijing to meet their demands and for Congress to pass a recently proposed bill that expresses support for the protest movement. (AFP Photo)
by Associated Press
Sep 08, 2019 1:58 pm

Thousands of demonstrators in Hong Kong urged President Donald Trump to "liberate" the semiautonomous Chinese territory during a peaceful march to the U.S. Consulate on Sunday, but violence broke out later in the business and retail district after protesters vandalized subway stations, set fires and blocked traffic.

Protesters flooded a park in central Hong Kong, chanting "Resist Beijing, Liberate Hong Kong" and "Stand with Hong Kong, fight for freedom." Many of them, clad in black shirts and wearing masks, waved American flags and carried posters that read "President Trump, please liberate Hong Kong" as they marched to the U.S. Consulate nearby.

"Hong Kong is at the forefront of the battle against the totalitarian regime of China," said Panzer Chan, one of the organizers of the march. "Please support us in our fight."

Hong Kong has been rocked by three months of unrest sparked by a proposed law that would have allowed criminal suspects to be sent to mainland China for trial. Many saw the extradition bill as a glaring example of the erosion of civil liberties and rights promised under a "one country, two systems" framework when the former British colony returned to Chinese rule in 1997.

Hong Kong's government promised this past week to formally withdraw the bill, but that failed to appease the demonstrators, who have widened their demands to include calls for direct elections for the city's leaders and an independent probe into alleged police brutality against protesters.

The unrest has become the biggest challenge to Beijing's rule since Hong Kong's return from Britain. Beijing and the entirely state-controlled media have portrayed the protests as an effort by criminals to split the territory from China, backed by hostile foreigners.

Protesters on Sunday urged Washington to pass a bill, known as the Hong Kong Democratic and Human Rights Act, to support their cause. The bill proposes sanctions against Hong Kong and Chinese officials found to suppress democracy and human rights in the city, and could also affect Hong Kong's preferential trade status with the U.S.

A group of protesters sang "The Star-Spangled Banner" before handing over an appeal letter to a U.S. Consulate official.

Just before the rally ended, violence broke out after riot police detained several people and chased protesters out of the nearby Central subway station. Angry protesters smashed glass windows and sprayed graffiti at the station's exits.

Protesters burned cardboard boxes and other debris to start a fire at one of the exits. A barricade was set on fire at a nearby street, but firefighters quickly snuffed it out.

The government said some protesters also blocked traffic at a major thoroughfare near City Hall in the area, paralyzing traffic. Riot police chased groups of protesters down several roads as night fell, searching dozens of young people on the street and at the next two subway stations after Central.

The U.S. State Department said in a travel advisory Friday that Beijing has undertaken a propaganda campaign "falsely accusing the United States of fomenting unrest in Hong Kong." It said U.S. citizens and embassy staff have been the target of the propaganda and urged them to exercise increased caution.

Some American legislators are pressing Trump to take a tougher stand on Hong Kong. But Trump has said little in public since recommending on Twitter in mid-August that Chinese President Xi Jinping "meet directly and personally" with the protesters.

Political analysts suggest Trump's response has been muted because he doesn't want to disrupt talks with Xi's government over their tariff war.

The Senate majority leader, Mitch McConnell, said last week that he would recommend Trump take "more forceful action" if Chinese authorities crush the demonstrations. The protests are an embarrassment to China's ruling Communist Party less than one month before the Oct. 1 celebration of its 70th anniversary in power.

Separately, well-known activist Joshua Wong said in a statement through his lawyer that he was detained at the airport early Friday for breaching bail conditions. Wong, a leader of Hong Kong's 2014 pro-democracy protest movement, was among several people detained last month and was charged with inciting people to join a protest in June.

Wong, who just returned from Taiwan, where he gave speeches on Hong Kong's protests, and is due to visit Germany and the U.S., said the court had approved his overseas trips.

He described his detention as a procedural hiccup and said he expected to be released Monday. His prosecution comes less than two months after his release from prison for a two-month sentence related to the 2014 protests.