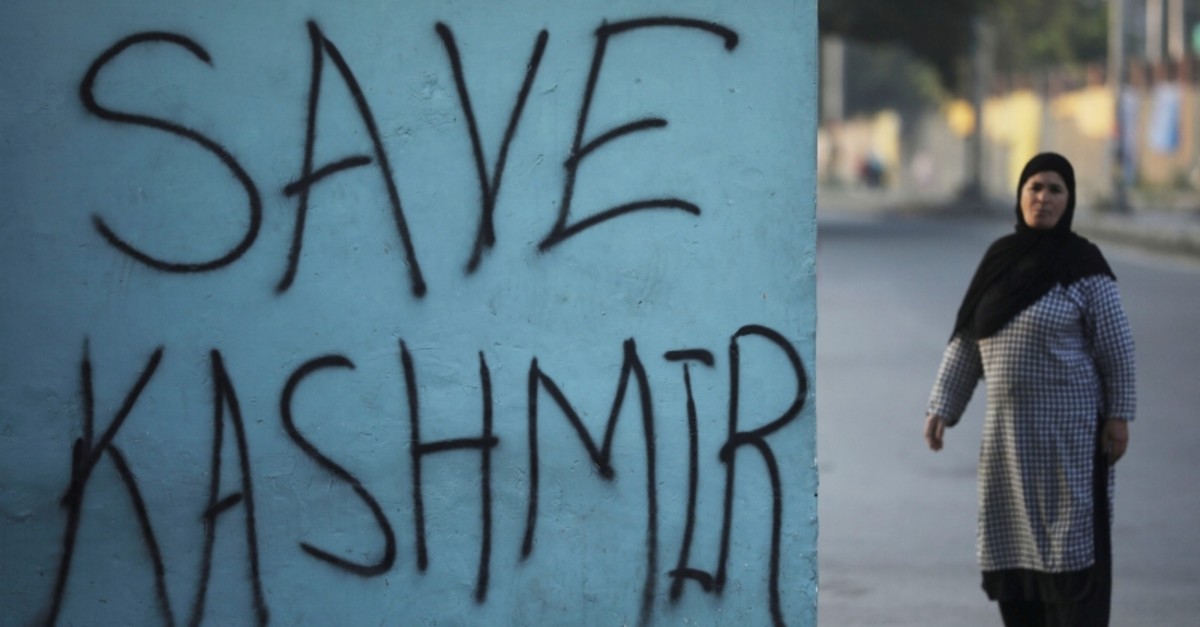 A woman stands next to a graffiti written on a wall during restrictions, following scrapping of the special constitutional status for Kashmir by the Indian government, in Srinagar, Jammu and Kashmir, India, Sept. 15, 2019. (Reuters Photo)
by Sep 15, 2019 11:14 am

Kashmir has seen an average of nearly 20 protests per day against Indian rule over the last six weeks despite a security lockdown to quell unrest, a senior government source said.

Despite a curfew, movement restrictions and the severe curtailment of internet and mobile phone services, public demonstrations against India — mostly in the largest city Srinagar — have been constant, the source told French Press Agency (AFP) late Saturday.

Altogether there have been 722 protests since Aug. 5, with Baramulla district in the northwest and Pulwama in the south the biggest hotspots after Srinagar, the source said.

Since that date, nearly 200 civilians and 415 security force members have been hurt, according to the source.

Ninety-five of the civilians were injured in the last two weeks, the official said.

So far more than 4,100 people — including 170 local political leaders — have been detained across the valley, with 3,000 released in the past two weeks, the official said.

It was unclear whether any politicians were among those released.

Indian authorities have so far insisted that outbreaks of violence have been minimal, and that only five civilians have died since the clampdown started.

The relatives of four of those killed told AFP they believed the security forces were responsible for their deaths.

The latest updates came as police said Thursday that three men suspected of belonging to a Pakistan-based militant organization were arrested while transporting weapons and ammunition towards Indian Kashmir.

Nuclear-armed neighbors India and Pakistan have fought two wars over Kashmir, which was split between the two countries in 1947.

India deployed extra troops ahead of the Aug. 5 decision to reinforce some 500,000 soldiers already stationed in the region, one of the most militarized places on the planet.

Pakistani Prime Minister Imran Khan on Friday promised to raise the decision to strip Indian Kashmir of its autonomy at the upcoming U.N. General Assembly session.