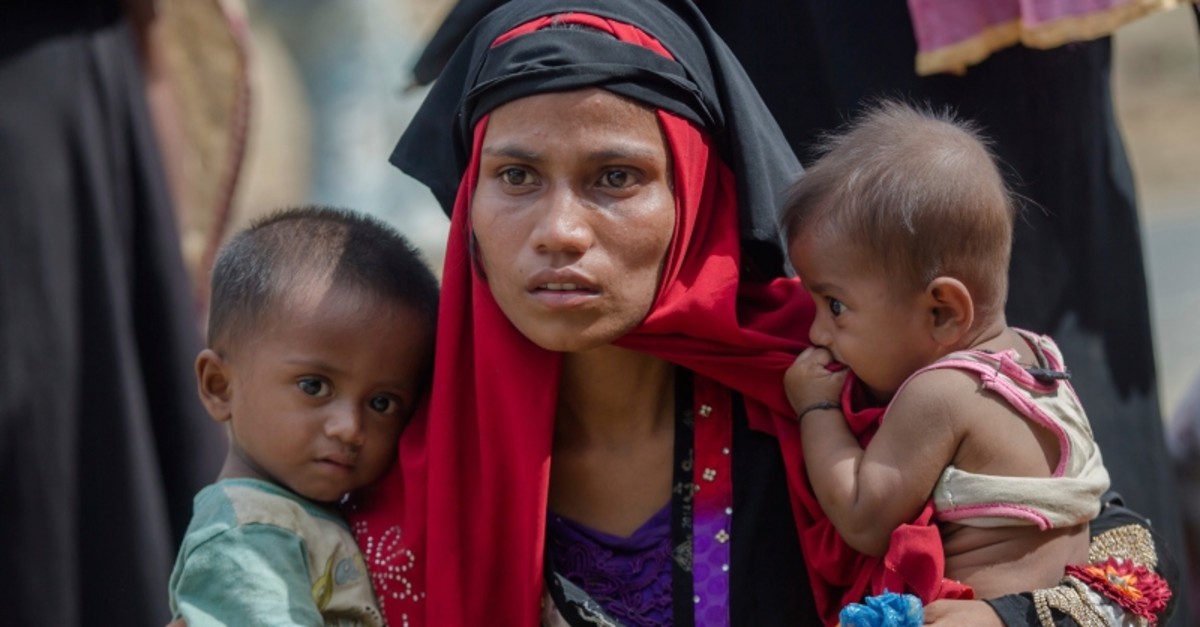 In this Oct. 22, 2017, photo, a Rohingya Muslim woman, Rukaya Begum, who crossed over from Myanmar into Bangladesh, holds her son and daughter after the government moved them to newly allocated refugee camp areas, near Kutupalong, Bangladesh. (AP)
by Sep 16, 2019 3:28 pm

Rohingya Muslims remaining in Myanmar still face a "serious risk of genocide," U.N. investigators said Monday, warning the repatriation of a million already driven from the country by the army remains "impossible."

The fact-finding mission to Myanmar, set up by the Human Rights Council, last year branded the army operations in 2017 as "genocide" and called for the prosecution of top generals, including army chief Min Aung Hlaing.

Some 740,000 Rohingya fled burning villages, bringing accounts of murder, rape and torture over the border to sprawling refugee camps in Bangladesh, where survivors of previous waves of persecution already languished.

But in a damning report, the United Nations team said the 600,000 Rohingya still inside Myanmar's Rakhine state remain in deteriorating and "deplorable" conditions.

"Myanmar continues to harbor genocidal intent and the Rohingya remain under serious risk of genocide," the investigators said in their final report on Myanmar, due to be presented Tuesday in Geneva.

The country is "denying wrongdoing, destroying evidence, refusing to conduct effective investigations and clearing, razing, confiscating and building on land from which it displaced Rohingya," it said.

Rohingya were living in "inhumane" conditions, the report continued, adding more than 40,000 structures had been destroyed in the 2017 crackdown.

The mission reiterated calls for the U.N. Security Council to refer Myanmar to the International Criminal Court (ICC) or to set up a tribunal, like for the former Yugoslavia and Rwanda.

It said it had a confidential list of more than 100 names, including officials, suspected of being involved in genocide, crimes against humanity and war crimes, in addition to the six generals named publicly last year.

The report also repeated calls for foreign governments and companies to sever all business ties with the military, urging a "moratorium" on investment and development assistance in Rakhine state.

The maligned Muslim community has long been subjected to tight movement restrictions, making it difficult or impossible to access healthcare, work and education.

The Rohingya are denied citizenship in Buddhist-majority Myanmar and are accused of being illegal immigrants from neighboring Bangladesh.

The army justified the crackdown as a means of rooting out Rohingya insurgents.

Bangladesh and Myanmar signed a repatriation deal two years ago, but virtually no refugees have returned to date.

The investigators described conditions in Myanmar as "unsafe, unsustainable and impossible" for returns to take place.

Nearly 130,000 Rohingya have been trapped in camps in central Rakhine since a previous bout of violence seven years ago.

Described as "open-air prisons" by Amnesty International, people there remain reliant on humanitarian aid and are rarely granted permission to leave.

Those outside the camps fare little better, needing special authorization -- and often hefty bribes -- to leave their village boundaries.

Their homes flattened by bulldozers and land commandeered, refugees in Bangladesh fear they will be subjected to the same, or even worse, treatment if they return to the processing camps built by Myanmar.

The U.N. team also accused the army of fresh "war crimes," including forced labor and torture, against civilians in the north of Rakhine state.

The area has once again become embroiled in conflict as the military wages war on the Arakan Army (AA), rebels fighting for the rights of ethnic Rakhine Buddhists.

"Instead of making biased accusations, they should go onto the ground to see the reality," Zaw Min Tun told AFP.

The U.N. investigators have never been granted permission to enter Myanmar or access Rakhine.

The team has handed its report to an investigative panel, which aims to build up evidence to support any future prosecution.

"The scandal of international inaction has to end," mission expert Christopher Sidoti said.

"Unless the United Nations and the international community take effective action this time, this sad history is destined to be repeated."