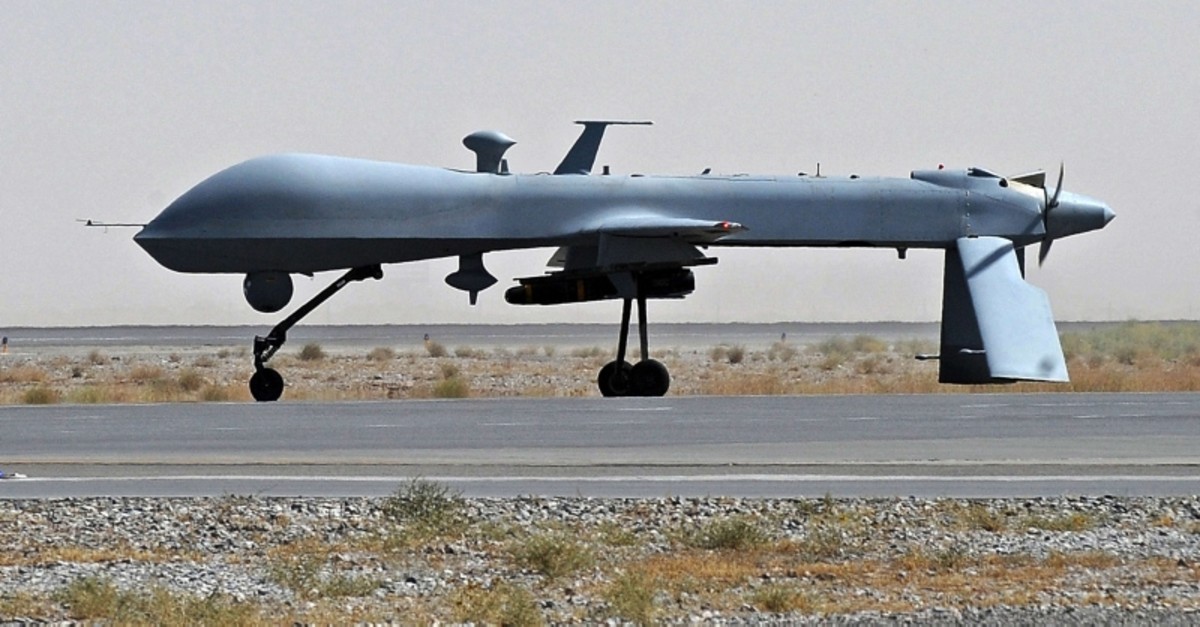 A file picture taken on June 13, 2010 shows a US Predator unmanned drone armed with a missile on the tarmac of Kandahar military airport in Afghanistan. (AFP Photo)
by Compiled from Wire Services Sep 19, 2019 1:01 pm

At least 30 civilians were killed and 40 injured in an air strike conducted by the Afghan security forces, backed by U.S. air support, in eastern Afghanistan, officials said on Thursday.

The attack, on Wednesday night was aimed at destroying a hideout used by Daesh terrorists, but it accidentally targeted farmers near a field in Wazir Tangi area of Khogyani district in Nangarhar province, three government officials told Reuters.

The area is close to the Tora Bora mountains.

Sohrab Qaderi, a provincial council member in eastern Nangarhar province said a drone strike killed 30 workers in a pine nut field and at least 40 others were injured.

The defense ministry in Kabul confirmed the strike conducted by Afghan and U.S. forces was aimed at fighters belonging to the Daesh, but refused to share details of civilians casualty caused by the attack.

Attaullah Khogyani, a spokesman for the provincial governor of Nangarhar confirmed the air strike. "The government is investigating the incident, so far nine bodies were collected from the attack site near a pine nut field."

U.S. forces in Kabul were not immediately available for comment.

Malik Rahat Gul, a tribal elder in Wazir Tangi said the air strike happened at a time when tired workers, mainly daily wage earners, had gathered near their tent after harvesting pine nuts in a field nearby.

"The workers had lit a bonfire and were sitting together when a drone targeted them," said Gul.

Since the end of combat mission in 2014, only the U.S. forces out of all NATO forces stationed in Afghanistan continue to engage in offensive operations against insurgents and provide aerial support to the Afghan forces.

Lying east of the capital Kabul, the Nangarhar province remains one of the most insecure provinces in Afghanistan, with militants controlling some swaths of land close to tribal region of Pakistan.

Recently, Afghan forces backed by U.S. air power managed to reclaim some territory from the insurgents, resulting in deadly clashes in various pockets of the country claiming many lives on all sides.