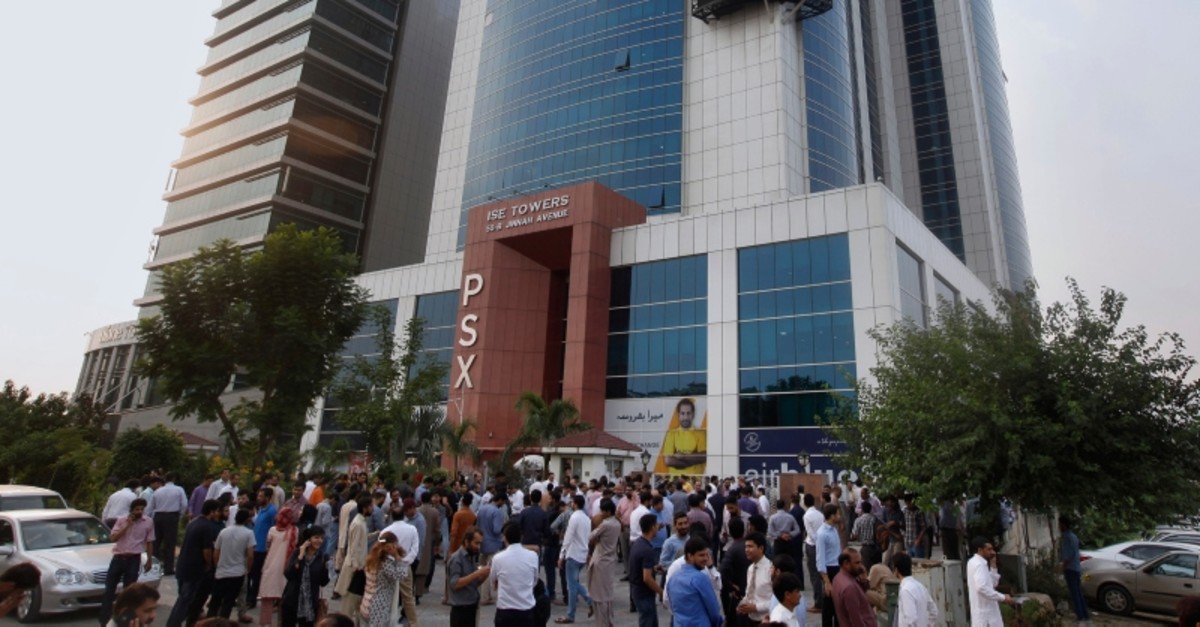 People gather outside their office building after an earthquake is felt in Islamabad, Pakistan, Tuesday, Sept. 24, 2019. (AP Photo)
by Compiled from Wire Services Sep 24, 2019 3:15 pm

A powerful 5.8 magnitude earthquake struck northeast Pakistan on Tuesday, badly damaging scores of homes and shops and killing at least 22 people and injuring over 700, officials said.

The epicenter of the shallow 5.8 magnitude was near the Kashmiri city of Mirpur, roughly 22 kilometers (14 miles) north of Jhelum in agricultural Punjab province, according to the U.S. Geological Survey.

Mushtaf Minhas, information minister in Pakistan-held Kashmir, said 22 people, including women and children, were killed in the quake, mostly due to collapsing roofs and walls.

"We are supplying tents, food and other essential items to earthquake-affected people. We are facing a tragedy but we will try our best to ensure the rehabilitation of affected people as soon as possible," he told The Associated Press.

Mahboob Ahmed, a doctor at a village hospital near Mirpur, said they treated 700 people and most of them were later discharged or referred to the district's main hospital, where better health facilities were available.

Raja Qaiser, a deputy commissioner, said rescuers were still transporting victims to hospitals in Mirpur. An emergency was declared in Pakistan-administered Kashmir.

He said the main road near Mirpur was also badly damaged, causing accidents and damaging buses and other vehicles.

Mirpur, a city known for its palatial houses, has strong ties to Britain and the majority of its 450,000 residents carry both British and Pakistani passports.

"The quake was 10 kilometers deep and was felt in most of Punjab province, some parts of Khyber Pakhtunkhwa. The worst hit was Mirpur, Azad Kashmir," Pakistan's chief meteorologist Muhammad Riaz told AFP.

Pakistan's military deployed "aviation and medical support" teams along with troops to affected areas in Kashmir, according to its spokesman.

The prime minister of Pakistani Kashmir said at least 100 people were injured and being treated in a Mirpur hospital.

"More than 70 people have been wounded and at least three killed in the earthquake," Saeedur Rehman Qureshi, an official from the State Disaster Management Authority, told AFP.

Naeem Chughtai, a Mirpur resident living near the city's main hospital, told AFP that at least one 10-year-old girl had been killed.

He also said the area's infrastructure -- including roads, mobile phone towers, and electricity poles -- had been badly damaged by the quake.

Witnesses Sajjad Jarral and Qazi Tahir, who spoke to AFP by telephone from Mirpur, said the quake had caused a building to collapse and inflicted heavy damage on at least one road.

Tremors were felt as far as New Delhi, with the Press Trust of India reporting that panicked people rushed out of their homes and offices in several places, including in Rajasthan, Punjab, and Haryana.

"The earthquake was felt but there are no reports of any damage," Amir Ali from the disaster management department in Indian-administered Kashmir told AFP.

Pakistan straddles part of the boundary where the Indian and Eurasian tectonic plates meet, making the country susceptible to earthquakes.

The country was also hit by a 7.6-magnitude quake on Oct. 8, 2005, that killed more than 73,000 people and left about 3.5 million homeless, mainly in Pakistan-controlled Kashmir.