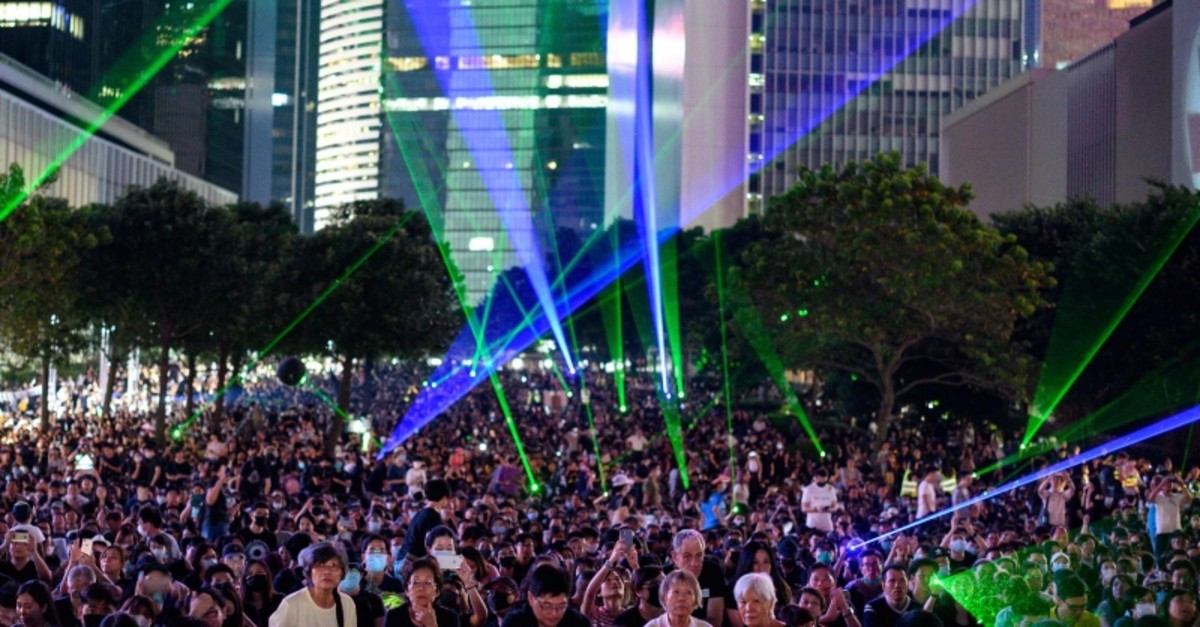 People attend a rally to mark the fifth anniversary of the ,Umbrella Movement,, in the Admiralty area of Hong Kong on September 28, 2019. (AFP Photo)
by Compiled from Wire Services Sep 28, 2019 4:47 pm

Renewed clashes broke out in Hong Kong Saturday night as police used water cannon and tear gas to disperse hardcore protesters hurling Molotovs and bricks after tens of thousands rallied peacefully in a nearby park.

Huge crowds had gathered to mark the fifth anniversary of the "Umbrella Movement", the failed pro-democracy campaign that laid the groundwork for the massive protests currently engulfing the finance hub.

Tens of thousands crammed into Tamar Park outside the city's parliament, the same site that was the epicenter of the 2014 protests.

But smaller crowds took over a main road opposite the building with groups of hardcore activists in masks throwing bricks and petrol bombs at the nearby Central Government Offices. Police responded with water cannon laced with pepper solution and tear gas volleys. In June, protesters stormed the building, vandalising the Legislative Council chamber.

Saturday's scenes were reminiscent of the Umbrella Movement, which exploded when huge crowds came out after police fired tear gas at a student-led rally which had taken over the same highway -- and was named after the ubiquitous tool people used to defend themselves from police.

Both 2014's protests and the current demonstrations were fueled by fears that Beijing is eroding freedoms in the semi-autonomous Chinese city and frustrations over the lack of direct elections. But the character of the protests has noticeably hardened in the intervening years.

Compared to the current strife -- where street battles have erupted for 16 consecutive weeks -- 2014's protests were softer, with students completing classwork in the camps, recycling their waste, and the police largely avoiding direct conflict during the 79-day occupation of three key intersections.

This summer's pro-democracy protests have had a distinctly more existential feel, with clashes growing in intensity and Beijing issuing increasingly shrill warnings.

"I think people have prepared for a long-term fight, it is not easy to gain democracy from Chinese Communist Party," a 29-year-old engineer, who gave her surname Yuan, told AFP.

She said she had largely sat out the 2014 protests but felt compelled to join the streets this summer, especially after police were accused of responding too slowly to a gang of Beijing supporters who attacked protesters in late July.

"Police behavior is a major catalyst for people coming out," she said.

Many of those attending Saturday's rally defended the use of violence by more hardcore activists and spoke wistfully about the more festive atmosphere that characterized the Umbrella Movement.

But they said Beijing's refusal to grant democracy -- coupled with the ongoing erosion of freedoms -- had hardened their resolve.

"If Hong Kong people could have achieved our demands with peaceful, rational and non-violent action, then of course we would not have needed to use more radical approaches," a 20-year-old student, who gave her surname as Chan, told AFP.

"Looking back at the peaceful umbrella movement, there was no achievement at all."

He recently returned from the United States where he testified before a Congressional committee about eroding freedoms in Hong Kong, infuriating Beijing.

Addressing reporters after his announcement, Wong stated that as he is now of age to run for office and has not received a prison sentence of more than three months, there is "no reason" he should be blocked from running for a seat on the district council.

"If they disqualify my candidacy, the world is watching, and Hong Kong people are watching - Beijing and [the] Hong Kong government will need to pay a price," Wong warned.

In June, as a new wave of protests broke out against a now-abandoned extradition bill, Wong was released after serving a two-month sentence linked to his engagement in the Umbrella Movement.

He was again arrested and released on bail for partaking in illegal protests earlier this month.

This summer's protests were ignited by a now-scrapped plan to allow extraditions to the authoritarian mainland.

But they have snowballed into a wider movement calling for democratic rights and police accountability after Beijing and the city's leader Carrie Lam took a hard line.

Activists are planning to ramp up their protests in the coming days.

Beijing is preparing a huge military parade on Tuesday to mark 70 years since the founding of the People's Republic of China, reveling in its transformation into a global superpower.

But democracy protesters are determined to take the shine off the festivities.

Rallies are planned for Sunday to mark a Global Anti-Totalitarianism Day.

Students are planning a class boycott on Monday while online message boards -- used to organize the largely leaderless protests -- have filled with calls to disrupt celebrations of the People's Republic's 70th anniversary.

The government scrapped plans to hold a traditional firework display to mark the anniversary and have moved a flag-raising ceremony indoors, citing security concerns.

Among the demands being made by protesters is an independent inquiry into the police, an amnesty for the 1,500 people arrested, and universal suffrage.

But Beijing and local leader Carrie Lam have repeatedly dismissed those demands. Earlier this week a top Chinese envoy in the city described them as "political blackmail."